Look back: the stories and successes from 60 years of commercial TV in Australia

Look back: the stories and successes from 60 years of commercial TV in Australia 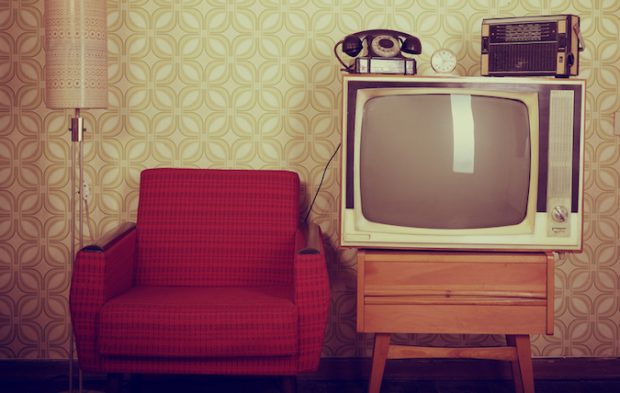 “Good evening, and welcome to television.” It was 16 September 1956 when Bruce Gingell uttered those immortal first words on TCN-9 Sydney, launching commercial television in Australia. Jaci Burns looks at some of the stories, facts and industry figures that have shaped the medium.

This article first appeared in The Content Issue, our August/September 2016 issue of Marketing.

Brand integration has been part of television since the early days, but it’s come a long way.

Aspiration plays a massive role in brand building, so these days it’s almost expected that the programs we watch will feature product integration. For the most part, it’s subtle – there may be a car driven, a pen used. All of these ancillary items represent commercial transactions.

The key is to integrate products in a manner that enhances, not disrupts, the viewing experience.

“And as producers, we’re the gatekeepers. At the end of the day someone like me will go, ‘No, they’re not holding up the f***ing zucchini!’.”

In reality television, the fundamental difference between Australia and the rest of the world is what’s called ‘the strip’ – the show that runs for two, three or four consecutive nights, typically starting on a Sunday evening, during prime time.

Pioneered by Ten’s David Mott with MasterChef, the strip is peculiar to Australia and is loved by audiences.

“It’s both a good and bad paradigm,” says Swift. “It’s good that you can amortise your costs over lots of episodes, so your episodic costs and per hour costs come down, but the bad thing is you haven’t got more product to sell. If you integrate a brand into a show, you can charge a lot because you’ve got lots of episodes, but actually if you had four or five shows you could probably make more money.”

There are examples of branded content but “it’s never been a game changer in this market”, according to Swift.

Certain shows that are brand-funded do quite well and deliver for the brand, such as Air Rescue on Seven, funded by Westpac, and Ready for Take Off on Nine, funded by Qantas.

Ten’s Russel Howcroft cites Recipe to Riches as a great example of branded content. The winning recipe was available to purchase at Woolworths the following day, linking TV to the cash register.

Coles has experienced similar success from its involvement with MasterChef. It’s an integral part of the show and the Australian public like it because it helps them create the stuff they’re seeing on the show. “There’s a service in that integration,” says Howcroft.

For those who are in front of the camera, product integration and the associated financial pressures can make life more difficult. “I cope with it because I can manipulate it with integrity,” says Seven’s Graham Ross.

“I try to bring authenticity as much as I possibly can to each story. I don’t let them railroad me and I still maintain that it’s the story that has to be told and not somebody’s commercial enterprise. I’m a commercial animal, I fully accept that, but I haven’t sold my soul for a story.”

Most viewed programs of all time in Australia.

As a representative for MIPCOM and MIPTV, the two biggest television trade shows, Natalie Apostolou has travelled to Cannes twice a year since 2010. There, she helps broadcasters buy international content for our local screens, and assists producers from Australia and New Zealand to sell their content internationally.

“Australia is an international success story and our content is in high demand,” says Apostolou. “We’ve established an international reputation and that’s an exceptional thing for a country of our size.”

Apostolou first became involved  with MIPTV in 2008 while working as a journalist and covering cross- platform digital media. YouTube had just launched.

“I came in at a time when the market was being disrupted – going from a traditional, solid, easy advertising-based model to now finding different ways of consuming content. Broadcasters no longer have the same power and producers have been empowered by the ability to screen their content across borders,” she says.

The transformation of television brings with it massive commercial opportunity. Whereas previously, whole shows were being sold to overseas markets, now the formats, as in the ideas for shows, are also now being sold.

“Producers make far more money from selling the idea for a show than they do selling the residuals for a show,” explains Apostolou. “Before, producers were thinking ‘How will I get the money to make this thing and get a channel to screen it? Now they’re thinking ‘How can I make this so that international broadcasters want to pick it up, and so it can work across other platforms?’”

The ABC has been incredibly successful at picking winners and working with production partners to make stellar content that is attractive to overseas audiences. Rake, produced by Essential Media, is an example of the international marketability of high quality Australian content.

So, too, is the repurposing of content. Prisoner worked incredibly well in the 1970s and screened all over the world. Foxtel was smart enough to rewrite and repurpose it as Wentworth, such that it was sold to 141 countries.

Surfing the Menu was first created in 2003 by an independent producer who saw the television potential of two up-and-coming chefs: Curtis Stone and Ben O’Donoghue. The program aired on the ABC and was an amazing global success, making Stone in particular a huge superstar.

Twelve years on, another Australian producer, now living in Los Angeles, sees the same ‘star’ potential in two MasterChef contestants: one a series winner (Hayden Quinn), the other a runner-up (Dan Churchill). Rather than reinvent the wheel, he repurposed the Surfing the Menu format and worked with Tourism Australia and other local tourism bodies to make the showcase not just of food, but of Australia as a destination. In this way, Australia has become a character of the show, which is incredibly saleable to overseas markets.

Says Apostolou, “You always have to be thinking, ‘Who will this resonate with internationally?’”

Surfing the Menu was relaunched on the ABC in May 2016 (pictured top left) and is a prime example of how Australian content has evolved, come of age and set the benchmark for the commercialisation of content and talent.

The business model of commercial networks is under threat. To remain relevant, and profitable, they must revolutionise. However, while most analysts report a decline in traditional TV viewing, when you aggregate the ratings with catch-up television, iView and all the other platforms, the numbers are still healthy.

“We’re still hitting the same number of eyeballs, but not in the way we’re used to, or in the way we’re most geared to monetise it,” admits Channel Nine’s Adrian Swift. “We see where the future is but, boy, it’s going to take a little bit of grinding of gears to get there.”

The ABC’s Richard Finlayson agrees that the challenge over the next few years will be “knowing how hard to pull the levers”.

“In the case of terrestrial TV, it’s fair to say it will look completely different in 10 years and may not even exist. The trick is being able to judge how quickly that change will happen, and how quickly you should move in advance of it,” he adds.

“I don’t mind where our viewers watch our content – ultimately, even through Facebook. The challenge for us is that it’s just so noisy. How do you make your content cut through to the people you want to reach?” says Finlayson.

“We’ll do what we’ve always done, which is to create and commission great content, though I would argue that in 10 years 90 percent will be delivered over IP (internet protocol) and with targeted ad insertion and probably ad breaks that can be constructed by the viewer,” says Swift.

Think TV is intended to dismantle a lot of the negative myths around television and educate marketers and creative agencies about the scale and effectiveness of commercial television advertising.

In the US, TV ad spending has increased by 5%; in the UK it’s gone up by 7.5%. Howcroft believes those increases are because there’s increased clarity in those markets around what media works, and the integrity of TV as an ad medium.

“Whether it’s offensive or defensive, it’s about helping the marketer make the decisions that they need to make, and keeping the creative agencies informed about the power of commercial television,” says Howcroft. “TV makes shows famous. It makes individuals famous. And it’s equally strong – more powerful – for brands because you’re able to boil your message down to a 30-second or whatever piece and then repeat it into infinity. I feel and fear we’ve forgotten the simplicity of that. TV creates fame and you can exploit that for commercial benefit. Nothing else comes close.”

PwC’s well-publicised ‘Australian Entertainment and Media Outlook 2016-2020’ reported the average employee in our media and entertainment sector is 27, male, Caucasian and lives in Sydney’s Eastern suburbs or the Inner West.

At about the same time the PWC report was released, Waleed Aly claimed the 2016 Gold Logie. So how well does free-to-air television represent modern Australia? The ABC and SBS represent diverse interests, particularly through multicultural content.

Adrian Swift acknowledges the Nine Network is casting much more widely and looking for a wider selection of faces in its dramas and reality shows.

To purchase a copy of The Content Issue or a subscription to Marketing magazine, please visit the shop

BY ON 16 September 2016
Jacqueline (Jaci) Burns is managing director of Market Expertise, a B2B agency which specialises in the marketing of services, solutions and intangible products. Based in Sydney, Market Expertise works with ‘smart companies’, both Australian and international, from the financial services, professional services, technology and knowledge sectors.