A user’s guide to LinkedIn personalities

A user’s guide to LinkedIn personalities 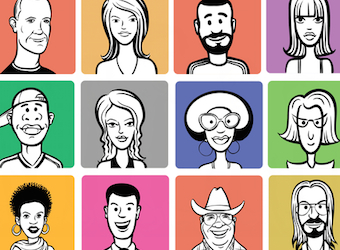 Have you ever wondered which LinkedIn personality type you fit into? Jaci Burns defines 16 different breeds of user to the professional social network.

If you’re a professional person, chances are you’ll be familiar with the Myers-Briggs Type Indicator. Developed in the 1960s, the MBTI is a psychometric questionnaire which measures the psychological preferences that influence how we perceive the world and make decisions. The MBTI is based on the theory that there are four principal psychological functions – sensation, intuition, feeling and thinking – and 16 possible personality types.

Two generations on, LinkedIn is established and within just over a decade is the largest and most robust CRM system in the world – not to mention the preferred networking tool for 277 million professionals across 200 countries.

277 million professionals, but just 16 personality types. Which LinkedIn persona are you?

The in-breeder may give the appearance of being an accomplished networker but an invisible force field prevents him from connecting with anyone outside his current employer. For this reason, in-breeders thrive in large organisations. They are known to mistake LinkedIn for their internal staff directory.

The Tinderer uses LinkedIn as if it were a hook-up app for singles. He surfs through and past profiles, only pausing occasionally to send a default connection request to individuals who catch his eye. The Tinderer should not be approached unaccompanied or communicated with after 8pm.

Miss Congeniality is the online equivalent of a cheerleader. On LinkedIn, she likes everything and everyone – A LOT – and her role is to help other members boost their rankings. She’s harmless and serves her purpose well.

Named after the teen-invention app (since purchased for a bomb by Yahoo) which condenses and simplifies content, the Summly spends his ample free time reading business periodicals and management texts so as to impress his network. The Summly is easy to identify as he will typically introduce his posts with “This HBR article is worth a read.”

The Poseur was late to adopt social media but now embraces it with unbridled enthusiasm. He posts prolifically however is so heavy-handed with hashtags and tiny urls that his musings are often indecipherable. The Poseur thrives on virtual jet-setting yet still prefaces a web address with “double-u double-u double-u”. In real life, the Poseur drives an E-Class.

The Clone is the person who (despite being told) continues to use his work email to access LinkedIn, and then has to recreate his profile each time he changes jobs. Clones are annoying for this, and other reasons. LinkedIn’s purported membership is inflated by at least 25% because of Clones.

To the Rambler, LinkedIn is the soapbox he’s always dreamed of. It gives him a platform from which to share his thoughts, his feelings. The Rambler could very well be the smartest guy in the room but his posts are so convoluted that his audience loses interest before he ever makes his point.

The Fairy Princess is the LinkedIn member whose posts we read while we’re waiting for our coffee. Fairy Princesses are all about making everyone else feel good. Whether that’s through sharing Mark Twain quotes or inspirational images, Fairy Princesses just want the work world to be a nicer place. Hashtag smiley face.

Hounds can smell business opportunities like a shark can smell blood. Hounds are the first to congratulate you when you change jobs, the first to applaud you when you’re promoted. They use LinkedIn masterfully to qualify leads and are responsible for every InMail you’ve ever received. You want a couple of Hounds on your team.

One of the cardinal rules of LinkedIn is to upload a (work-appropriate) photo to your profile. LinkedIn is no different to an online dating site – if you don’t have a photograph there’s an immediate element of mistrust. By now, most LinkedIn members have clued in to this so the Invisible Man is nearing extinction. If you’re out there, Invisible Man, show yourself!

In urban terms, COADDs suffer from ‘Centre of Attention Deficit Disorder’. On LinkedIn, they satisfy their constant need to be noticed and acknowledged by creating interest groups and then holding court as group administrators. COADDs feed off the power that comes from being able to accept or reject group members. If you try to make friends with one, she’ll think you’re pathetic.

Mariahs are similar to COADDS but they’re professionally more successful. Mariahs are very busy and important. In high school they were the mean girls. On LinkedIn, they have impressive job titles and work for blue chip companies. Don’t waste your time trying to connect with one – they will only communicate with other Mariahs.

Not to be confused with Mad Men’s favourite drink, on LinkedIn the Old Fashioned can be identified by the string of letters after her name. If you encounter an Old Fashioned, remind her that over 16 million people (roughly 8% of the US population) now have master’s degrees, such that they’re today as common as bachelor’s degrees were in the 1960s. Here in Australia, over 16% of the population have a degree and 6.2% hold higher than bachelor’s-level credentials. It’s time for the Old Fashioned to accept that academic post nominals are no longer a distinguishing feature. They should be removed from all LinkedIn profiles (as well as business cards and email signatures).

The Rookie isn’t necessarily young in years, but she’s certainly lacking experience and business savvy. Rookies often blur the line between LinkedIn and Facebook. They’re the ones who make silly mistakes like uploading a beach holiday photo on their profile, or listing pageant wins under ‘Honours and Awards’. Be kind to Rookies – you were one once too.

15. The Slave to the Algorithm

LinkedIn is built on a complex algorithm which surfaces and ranks profiles based on, among other things, how many connections they have and their profile activity. Many people don’t appreciate the relationship between the algorithm and the visibility of their profile. Let’s be honest, many people don’t even care. But some do: the Slave to the Algorithm is the LinkedIn member who is obsessed with being Number One. He’s probably an alpha male but it’s unlikely he played first grade. The Slave to the Algorithm indiscriminately issues invitations (always using the default connection request) in the misguided belief that having the most connections makes him superior. He’s a real winner.

Enthusiasts are well meaning and very likeable. On Linkedin, their biggest weakness is they’re unable to resist a popup. How do you know if you’re connected to an Enthusiast? Scroll down to the ‘Skills and Endorsements’ section on your profile. The person who has endorsed you for every single keyword (irrespective of whether they have experienced it or not) is probably an Enthusiast. Or she’s your sister.

BY ON 12 September 2014
Jacqueline (Jaci) Burns is managing director of Market Expertise, a B2B agency which specialises in the marketing of services, solutions and intangible products. Based in Sydney, Market Expertise works with ‘smart companies’, both Australian and international, from the financial services, professional services, technology and knowledge sectors.