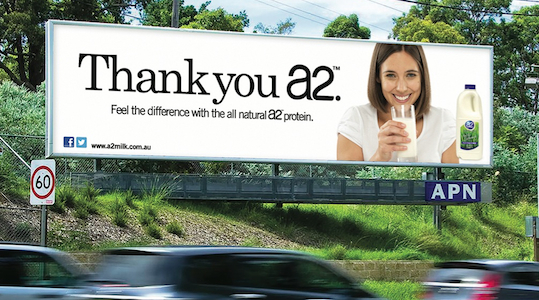 Emerging in a cluttered and commoditised market, A2 Milk Company combated the challenge of getting its unique story across to a niche group among a disengaged audience. This case study explains how the brand’s campaign helped it increase sales 90% in two years.

Campaign: ‘Thank You A2’

Approximately one in four Australians say they have problems drinking regular cows’ milk (based on a survey of 1185 18-to 67-year-old male and female consumers).

It can cause digestive issues, diarrhoea; sometimes a sense of general discomfort that can be very off-putting. This has led many to believe they are lactose intolerant and has relegated, for many, the morning latte to a thing of the past. But, as with cows, a sensitivity to dairy isn’t always black and white.

Regular cows’ milk contains two types of protein, A1 and A2. It’s thought that some people who suffer from sensitivity to milk are actually experiencing a reaction to the A1 protein rather than lactose, which is often assumed to be the case. A2 Milk (stylised as a2) comes from cows specifically selected to produce milk containing only the A2 protein and none of the A1 protein.

In May 2011 the A2 Milk Company engaged HBT to help tell the A2 story.

Thanks to the isolation of the A2 protein, many Australians who’d previously had difficulty drinking cows’ milk now had an alternative. For many long-suffering soy drinkers, the latte – or just milk on breakfast cereal – was finally back on the table.

Findings of the first human trial to evaluate the impact of drinking milk containing purely-A1 versus purely-A2 protein on the digestive system were published in August 2014, and suggested that milk drinkers could gain digestive health benefits by switching from milk containing the A1 protein. (The study was conducted by Curtin University, published in the peer-reviewed journal European Journal of Clinical Nutrition, and funded by a grant from the A2 Milk Company.)

At the time of its launch, A2 operated in a cluttered market, dominated by household names and emerging supermarket private label offerings. In fact, A2’s new campaign was still in launch phase during the much publicised ‘milk wars’ in January 2012, where $1-per-litre milk threatened many established players and emphasised the commodification of milk.

A2 was a new, more expensive player in a low-engagement grocery category, with a unique selling point that was difficult to explain. Plus, prior to the August 2014 research, HBT couldn’t make a definitive efficacy claim in any branding or promotional material. Therein lay a serious challenge.

A2 had previously worked with two other partners, and clues to the right messaging were emerging, but a step change to the business had remained elusive.

Ultimately, HBT saw untapped potential in a testimonial approach that had already been trialled. Its recommendation was to continue to let A2’s converts speak on the brand’s behalf, but to create a distinctive signature brand look and feel, as far away from conventional milk advertising cues as possible, and summed up by a well-crafted phrase that was to form the basis of all of A2’s communications from that point on: ‘Thank You A2’.

It all comes back to the consumer and today’s consumers’ concern about what they eat and drink. They are emotionally invested in their health and want to know where products are from and what’s in them. Provenance matters and consumers are happy to investigate. More so where the health of their family is concerned.

Modern day consumers’ desire for health often transcends the appeal of a cheaper option. HBT knew that if A2’s messages of health and well-being were compelling enough, its higher price point would no longer be a barrier.

Given the restrictions A2 faced in its story telling, HBT chose to target consumers in one of the most powerful ways it knew – through emotional connections. HBT seized on this modern sentiment and developed a campaign that spoke volumes by saying less. 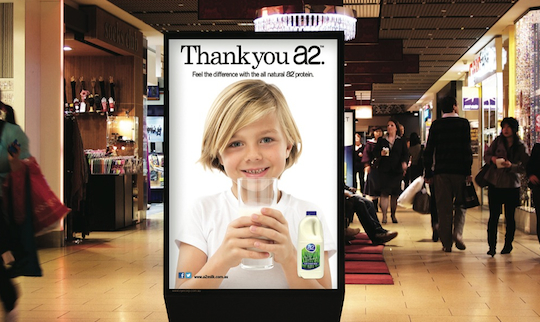 HBT understood that A2’s core consumers had long suffered a sensitivity that prohibited them from enjoying one of life’s most common and loved foods.

Even more interesting was the fact that only about 25% of A2 consumers had any problem with milk at all.

In 2012 the HBT team created a television and outdoor campaign featuring real A2 customers who were once again able to enjoy real milk, without the discomfort they had previously experienced. Rather than extolling the virtues of A2 beta-casein and handpicked herds or hanging its hat on a lengthy explanation of the intricacies of digestion, the campaign featured real consumers simply saying, ‘Thank You A2’.

By successfully targeting A2’s dairy sensitive consumers, HBT was confident that on-sufferers would follow suit and also choose A2 in a bid to consume milk with greater health benefits.

Also fundamental to the campaign was to steer well away from any conventional dairy cues. Any sign of a farmer or a cow would have led consumers to see the message, in spite of its newsworthy content, as a message for just another milk. Consumers had to be convinced that it was different, otherwise, why switch and why pay more?

Participants were sourced through a national Facebook campaign, which attracted an overwhelming response, leaving HBT spoilt for choice.

The sourcing of campaign talent via social media was a unique, low-cost solution that uncovered a wealth of credible spokespeople in addition to creating an ongoing community of active brand advocates.

The emotional connection dairy-sensitive sufferers felt towards A2’s real life success stories was overwhelming – the exchange of messages on A2’s Facebook page being a testament to this.

The initial television campaign ran nationally and was supported by an out-of-home campaign, which initially ran in Melbourne and later expanded to every state of Australia. A comprehensive digital program was undertaken to complement the execution.

In 2013 the ‘Australia Thanks A2’ concept was further developed to build on its success, with the second phase of the campaign again featuring real A2 consumers. This time consumers explained just what it meant to them to be able to enjoy milk again. And again by not saying too much, the campaign spoke volumes.

In two years, sales of A2 grew more than 90%, with market share increasing commensurately over the same period. This now well-established brand holds approximately 9% of the multimillion-dollar dairy milk market.

In an environment of acute price consciousness, the ability for the brand to command a consistent price premium of almost 150% against private label competitors today is extraordinary. A2’s entry into the market sent tremors through a previously stagnant category.

From a little known brand with a complicated message, A2 now has two of the top 20 grocery SKUs (stock keeping units) in grocery Australia-wide and is one of the very few branded SKUs on Aldi shelves.

On the back of this success, A2 has also been able to leverage the trust it established in the ‘Thank You A2’ campaign to expand its product offering to include reduced fat and cream, and toddler formula.

Now, A2 is expanding internationally, launching in the UK, Europe and the US.

« How co-creation can generate fast consumer insights to accelerate innovationBanking satisfaction scores reach record highs, but are we measuring the right thing? »