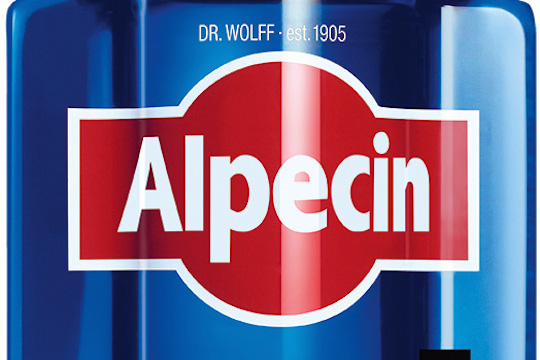 Specialist men’s hair product brand Alpecin has been family-run for over 100 years. Marketing spoke with CEO Eduard Doerrenberg while he was in Australia for the Tour Down Under to discuss the company’s pushes into Australia and Asia Pacific, involvement in professional cycling and why it loves to be the underdog.

In 1930, Drs August Wolff and C Bruck created Alpecin, “the first cosmeceutical hair and scalp tonic”. In the early 2000s, caffeine was added, due the compounds ability to block the negative effect of testosterone and “energise” hair.

As a preventative measure, rather than a re-growth treatment, the brand’s target market is basically men over 25.

For the past 18 years, the company has been run by Dr Wolff’s great grandson, Eduard Doerrenberg, who recently made the decision to relocate to Singapore to better serve the Asia-Pacific region, as part of his mission to take the German brand global.

While the product has been available here for a while, the company has recently taken over the marketing and distribution of the brand in Australia.

Marketing had the opportunity to interview Doerrenberg during his visit to Australia for the Tour Down Under, in which Team Giant-Alpecin competed.

Marketing: Alpecin’s history with cycling is a long one, but there was a break there. Why did you get back into it? 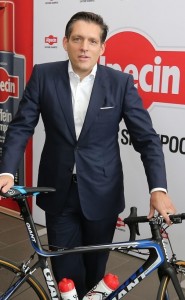 Eduard Doerrenberg: Going back into cycling was a clear strategic move. We’re doing it for business not for pleasure and were driven by three reasons.

First, it’s a very authentic activity because we have that history in cycling and we really like to be authentic, like our product.

Second, we believe that cycling and the cycling community is a perfect fit to our brand Alpecin because it’s a very male environment. It’s a lot of men taking care of their looks and health so that fits perfectly into the Alpecin idea.

Third, we have been looking to return to cycling for a couple of years now but it was not easy to find the right fit.

We were quite convinced that cycling, as many people say, is the new golf and so cycling is a global sport. The Tour de France is the biggest yearly global sports event, so of course riding was the terrific chance to bring the brand into 130 countries with just one activity.

These were the three main strategic reasons for doing it and joining in.

Australia is part of that strategy given that we wanted to really start the business here well. We do know cycling is big in Australia. It’s growing heavily so that’s a great fit. Last year we couldn’t do much because we signed late in 2014 so there was not much time to prepare for the 2015 Tour Down Under but obviously this year we could and it gives us a good backwind on our Australian activity.

M: Cycling is the new golf?

ED: You can see a clear global trend, specifically in developed countries, where people between 25 and 45 prefer to cycle instead of playing golf. That’s mainly driven by the idea that it’s much better for your fitness to cycle than to play golf. Golf takes longer but I think the whole fitness idea, the whole idea of health and being self-responsible fits perfectly with our encouraging men to take Alpecin early enough not to lose their hair or to lose much less than they would otherwise.

So it’s a perfect fit. The whole idea of prevention, not waiting until, I don’t know, you are overweight by 30 kilos and then you have a problem. You cycle to have a fit body and the same for the hair, we want to encourage men to do something for their hair fitness.

M: You’re now based in Singapore, what markets are you going after?

ED: Yes, that’s right. I moved with with my family to Singapore one and a half years ago. My idea was really to globalise the business and start in Asia.

The idea for us is to get to more or less in every market in Asia. We started with Hong Kong and Singapore. We started Australia last year and we’re now in Taiwan, Thailand and Malaysia. We’re going to probably start China in March so the idea is to get the infrastructure that we can serve all markets in the area.

ED: We want to be a global brand. That means we have to appear more or less very similar everywhere but of course there is always local adaption but we try to limit it to regional level. You may have different attitudes in different localities, so it’s a global project with some local activities.

M: What are the goals? You’re talking about global expansion, is there an aim that if achieved, you’d be satisfied?

ED: I would be satisfied that every man in the world would understand that he can do something for his hair and he should do it before he needs to get a very expensive, painful operation. That would be my ultimate goal.

M: Every market in the world?

M: Is it a competitive category?

ED: I don’t think so, because there is some medicines but they are, on one side not very effective as we know, and have a lot of side effects. They’re more treating people who already suffer from a lot of hair loss. We can’t help them. The whole idea of prevention and taking care of your hair is quite unique and quite new and I don’t see any real competitor in that area

ED: That’s right. 111 years almost. We have a lot of experience. We know very well what we’re talking about. We’re a very specialised company and that’s why we’re also very convinced that there’s a huge potential to grow that idea of prevention and to really invest a little bit in your hair in order to keep it and not complain later having not done anything.

M: There’s a trend and acceptance that’s been growing in terms of male grooming.

ED: Yeah, I think competition has increased and more and more men do understand that they have to do something. Still not enough from my point of view, however.

M: Outside of cycling, what are the other sort of activities or areas that the brand gets involved in?

ED: We believe that it’s good to concentrate on cycling so there’s no other sport activity so far. Cycling is a big project, it’s a global sport. I don’t see any room or necessity to increase on that but of course we have other activities. We have PR activities, we work a lot to explain the product.

M: Do you foresee this area getting more competitive as you face bigger multinationals – the Unilevers and the P&Gs?

ED: No, I don’t think so. I’m very different and I think they have a lot of issues. They’re not innovative and they’re not really long-term focused. We have to be different. I always say that we’re a little bit like Asterix, the French cartoon character. We’re surrounded by big troops of Romans and the only way for us to survive is to not fight like them. We have to be different.

Like becoming a sponsor in cycling in Germany two years ago. Nobody would have done that given the doping history. A big company wouldn’t have done it because the compliance officer would have said ‘no way’.

We say it’s lovely. It’s a really great sport and it’s coming back. We’re fully against doping in sports [but] we don’t mind doping your hair.

M: Was it a brave decision?

ED: Yes, I think it was brave, at least in German terms, but we have to be brave. We can perceive long-term strategies and that gives us a big advantage and we have to take that because on other sides we have of course disadvantages due to a lack of scale. I think that’s very important and we don’t have to please everybody. Some people don’t like us because they think maybe doping for hair is not right. We would simply say, ‘Why not?’ I mean, it’s okay to dope your hair. It’s not okay to dope in sport which is obviously cheating. If half of the men don’t like it and the other half like it we’ll be happy.

M: Do you like the idea of being Asterix on a personal level?

ED: Yes I like that idea, I like to be different. I like to do things others wouldn’t do, like moving yourself to Asia, taking your family and running the company out of Singapore. It’s a fully German company but it was a very important step because it signalled to the world that we’re really committed to Asia where we were going to invest. On the other side it clearly indicated too inside the company that this is a serious project. It wasn’t saying and not doing. This is really serious. I mean, if the guy running the company goes there it should mean something.

M: Is there an Obelix?

ED: The only connection to Obelix is that Obelix was dropped into the miracle liquid when he was a baby and became very strong and I was baptised with Alpecin and you know I have great hair so maybe that’s it.

« 10 trends in business intelligence for 2016The numbers game: why marketers must play along »