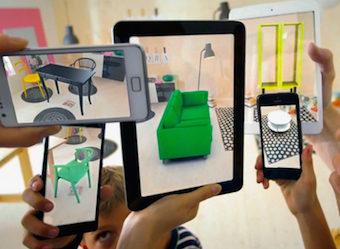 Jump into a world beyond reality where Joe Barber will be your guide to good stuff and the gimmickry.

Most augmented reality (AR) executions have been generally regarded as gimmicks, lacking any real tracking, control or engagement model implemented. Most of the implementations I’ve seen to date have been less than inspiring and deliver back to the consumer little or no real value. In this regard, AR has suffered from the same challenges as QR codes.

Augmented reality is a simple concept. Using a smartphone’s camera and screen, consumers are able to receive a view on their screen of the scene in front of them overlaid with some form of graphic or text element. It is exactly as it sounds – an augmented view of reality.

Advanced technology, when used properly, will always play a role somewhere and, for those brands, the returns are worthy of the stress and pressures to create something fresh, new and completely innovative. Just like QR codes: there were many very lacklustre implementations, especially here in Australia, that almost saw the demise of this tool in the marketing arsenal. QR codes play a significant role for scan-to- buy campaigns in Europe and the US, but a series of ordinary – and in one case, technically wrong – implementations in Australia saw their use almost disappear.

The challenge is creating something that is not only tactical, but can be implemented as a sustainable and strategic part of an omnichannel strategy. AR delivers a new mix of experiences for marketers to leverage and to create something fun and immersive. There are a few companies still using AR as a gimmick, but the ‘water cooler’ effect diminishes with every simplistic campaign. Consumers are willing to invest time to try, learn and explore new technology, but only if they are properly incentivised.

Implementations in Australia have, for example, included an app that allows users to view furniture in their own home, so they can see what a new table or bed would look like in their house. The implementation is reasonable, but fails in the ‘reality’ aspect due to clunky video.

A second, and probably more well- known, use of AR is in the apps that allow users to hold a smartphone up in a certain direction and see, for example, markers for all the cafés nearby, with names and distances to the location.

In 2014, I expect augmented reality to dominate many of the major brand executions. It provides a whole range of new execution and engagement options and, for the creative at heart, can deliver a powerful mix of entertainment and brand information, which can further be integrated into online/mobile ordering.

If you consider the movie industry and the depth of special effects and manipulation of reality on the big screen, the technology and concept underlying AR on mobiles has been around for a very long time. Brands leveraging many of the movie industry methods and processes are expected to start creating some truly immersive experiences.

The rise of the tablet as a companion to mobile means larger screens can be leveraged to create AR experiences that connect with customers. Imagine, for example, that your online grocery shopping experience moved from a never-ending list of products to a virtual walk down the aisles of the supermarket you regularly visit, giving that familiarity of product location and the ability to see yourself walking up and down the aisles with a shopping cart with wonky wheels slowly filling up – all from the comfort of your lounge chair sitting by an open fire! (And we’re not talking a cartoon-style representation of the shopping aisles, but photorealistic scenes and products.)

Pushing the AR envelope around the world

Recently, I was able to see some AR implementations in development in Cupertino, California. Two that caught my attention were for the consumer electronics and automotive industries. Both were investing heavily and working with a movie studio and using very advanced special effects packages. The consumer electronics implementation looked like this brand’s store and looked like real video footage, except it had been increased by 100 percent in terms of size and range of products. All the shelves contained actual product images and, by using gestures on a tablet, you could navigate the aisles quite easily. It was almost like Google Street View but for retail. As you navigated the aisles, nicely augmented with other shoppers moving around, you were able to tap on a product and open the packaging and view the item in a 360-degree viewing window. Full product specifications were available along with instructional and informational videos. Online shopping using this style of AR is an interesting evolution.

What was most interesting about this application, though, was the ability to select a product and see it inside your own living room. There were a few clunky steps to calibrate sizing, so that the TV looked the right proportions relative to the furniture, but it provided a neat extension much like the IKEA app mentioned earlier.

But here is the really interesting part: after talking to the agency, I discovered that as you scan your lounge room, with a new TV superimposed over the live images on your phone, the app is also using image recognition software to determine what other products you have and what other brands you purchase.

If you accelerate ahead a few years, think about the impact on bundled deals that consumer electronics retailers could create. As you pan your living room, the retailer can construct a full brand replacement proposal, even offering the trade-in of old products for a single- brand solution across all your home entertainment systems, from speakers through to set-top box and TV.

The other AR implementation allowed the user to take a virtual test drive in a car, focusing more on the interior features than driving simulation. You could move the mobile around and the view of the interior changed with all the buttons and features actually working. I turned the windscreen wiper button and sure enough the wipers started passing over the screen, but only if I held the mobile up high enough to be looking out the window. And out of the window… I could see my own reality – the actual video feed from the mobile’s camera as though I was driving this car in the office – a little weird but incredibly effective.

As I began to do more research, I found an app that had been developed in London by one of the alcohol companies, where you could hold the phone up to the outside of a local pub or nightclub and the centre of the screen started to morph to what was happening inside. There were live camera feeds showing the inside of the pub, almost like having X-ray vision.

An X-ray view inside the building certainly provides the consumer with entertainment value, but this brand took it to the next step. It used image recognition to locate consumers drinking from one of its bottles and if it recognised one of its loyal drinkers, then you received a coupon to your phone for the next 20 minutes to go inside and get a two-for-one bottle of their lager – a very creative, engaging and brand conversion execution. The campaign was so successful the offer was extended by an additional three months.

A recent AR campaign in Germany, which required consumers to download an Android app, achieved a sales increase of nine percent, despite the app crashing regularly. When a user ran the app and held their smartphone over the product packaging, the screen displayed a recipe and a video of how to use the product. Despite the basic nature of the implementation, it was enough to engage technology-hungry consumers.

With most tablets now having cameras, many agencies and developers are starting to extend augmented reality concepts to these larger format screens, delivering what is promised to be some incredible AR executions almost bordering on full virtual reality, which in many regards is the same thing. Unlike many industries, early adopters with clunky implementations still attract interest from consumers who, consistently over the last five to eight years, have embraced all kinds of new and emerging technologies and are very forgiving for those pushing the boundaries to new levels. The great news for brands is the level of success that can be achieved for those brave and bold enough to begin the journey into augmented reality.

BY ON 7 March 2014
Joe Barber is a 25 year veteran of technology companies with the last five years focussed on mobile and retail. He is currently CEO and founder of Edge80.com with other notable start-ups under his belt being Third Screen Media, Sniip and Planet Internet. Joe has lived and worked in the US, Malaysia and parts of Europe and talks at numerous trade events worldwide.