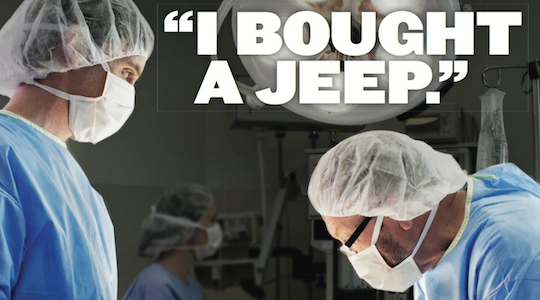 The mighty repositioning of the Jeep brand with the ‘I bought a Jeep’ campaign made the brand relevant to SUV, sedan and wagon buyers and dramatically boosted sales.

Campaign: ‘I Bought a Jeep’

Jeep had always been a niche brand in Australia that was lacking relevance for most Australians, and in this cutthroat, highly competitive Australian car market, it had been fighting to hold ground, let alone grow market share. Between 1999 and 2009, Jeep sales remained flat, averaging 4600 unit sales per year, with little deviation.

Interestingly, at the same time, the SUV segment in Australia was growing at an average of more than 9% from 2000. Jeep, however, was not profiting from this growth. Its cars were perceived as 4WD American army vehicles – an image not very attractive for the ‘footy mums’ of Australia. They didn’t want to drive a US army vehicle; they wanted something that fitted their needs and lifestyles. In fact, vehicles from the US have never succeeded in Australia, with Hummer trying in vain to crack the SUV market with only 12 Hummers registered as sold in November of 2009.

Therefore, in 2011, Jeep embarked on a new strategic journey to achieve growth. It stopped referring to the US origins of the car, and instead spoke directly to its ‘can do’ attitude, and the ‘Don’t Hold Back’ brand platform was developed. This original campaign, commencing in January 2011, prompted a moderate change in fortune for the brand. In a market driven by discounts and special offers, however, the brand platform was only part of the resurrection. A strong and memorable action-orientated campaign was needed.

With a strong brand platform in place, Jeep set highly aggressive sales metrics in place for the action-based component of the campaign: 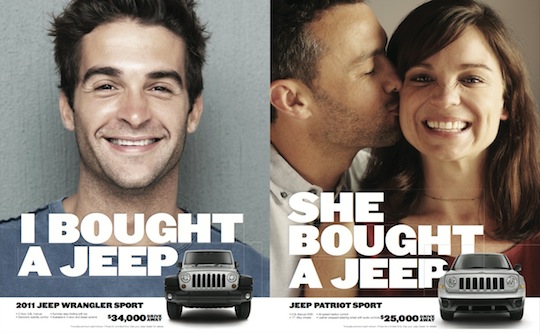 We knew the new brand message and campaign ‘Don’t Hold Back’ resonated with the Australian consumer as vehicle sales increased in 2011 from 5975 to 8648. However, we also knew that something was still holding us, and the consumer, back. Buying a Jeep was still considered an extraordinary purchase and certainly not as socially acceptable as buying any other SUV. We conducted qualitative research with current Jeep owners, and found one of the most interesting insights was that other people were always ‘incredulous’ when the Jeep owner told them they had purchased a Jeep. They would often respond with words to the effect of, “You bought a what?”.

We needed to increase the social acceptance of purchasing a Jeep, by demonstrating social proof. We wanted people to feel good about buying a Jeep; we wanted it to be ordinary yet aspirational. Often a brand’s strength will lie in its weakness. As a result, we decided to dramatise these reactions of people hearing someone had bought a Jeep – and turning the reactions into a positive.

The idea was brought to life in a range of executions, all with the aim of ‘normalising’ buying a Jeep – that is putting it in an Australian ‘everyday’ context. Each one enacted a different ‘I bought a Jeep’ situation – from a schoolyard, to a child’s birthday party, to a golf course. This was to truly reflect Jeep being a mainstream brand for mainstream Australia. All executions signed off with interchangeable Jeep models and their recommended retail price. 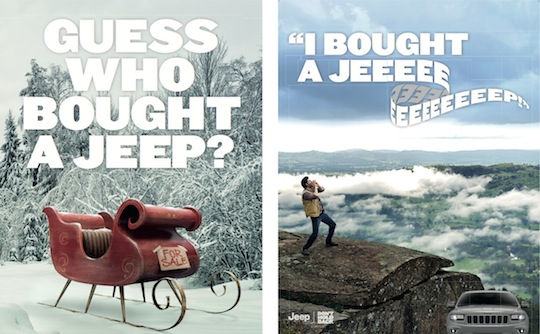 ‘I bought a Jeep’ delivered the most significant uplift of Jeep in Australia ever. The long-term flat yearly sales pattern was completely and dramatically shattered, moving from approximately 4600 sales per year for the previous decade, to 18,014 in 2012, 22,170 in 2013, and over 30,000 sales in 2014. This sales growth is even more remarkable when you consider that the auto market was only growing at 12.7%.

The brand platform campaign (‘Don’t Hold Back’) had a relatively small impact, until we built the retail message on top of it. From 2010 to 2011 sales increased from 5975 to 8648, an increase of 45%. Only once the ‘I bought a Jeep’ idea was executed did Jeep show phenomenal sales growth. In its first year, the 2012 sales objective was 3352 additional units. We achieved 9366 additional units, over delivering on the target by almost 180%. This exceptional growth was continued in 2013 with an additional 4000 vehicles sold and an overall target growth of 85% in two years.

The increased consideration for Jeep due to the campaign was also reflected in the website traffic. Website visitors to www.jeep.com.au increased by 400% between January 2011 and November 2013.

Not only did more people visit jeep.com.au in the case period, more visitors arrived at jeep.com.au from organic search, meaning more people were actively searching for ‘Jeep’ than they ever had before. In addition to generally higher traffic, ‘I bought a Jeep’ also increased conversion.

Web traffic didn’t just increase for the brand; people started to search the exact phrase, ‘I bought a Jeep’.

‘I bought a Jeep’ has quickly entered the Australian vernacular. In the case period, the phrase ‘I bought a Jeep’ was mentioned over 3600 times in blogs and on Twitter alone. Over 9300 spoof/parody videos were uploaded onto YouTube, some of them clocking up to over 55,000 views.

And while the campaign has now been running for over two years, there is no sign of the conversation slowing down. Its cultural relevance and talkability actually continued to grow in 2013. In 2013, social mentions stayed above 200 every month, in some months even going up to over 600. Recently, AFL star Buddy Franklin crashed his girlfriend’s car – a Jeep. Many of the news headlines were not ‘Buddy in crash’; they were ‘I crashed a Jeep’. The brand is truly embedded into Australian culture. 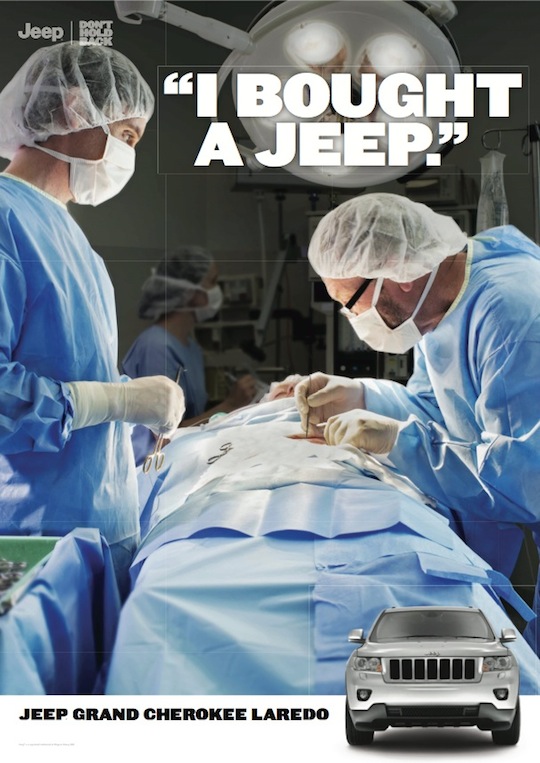 « How poor digital experiences are damaging your bottom lineIn-house or outsource: getting the best value digital strategy »