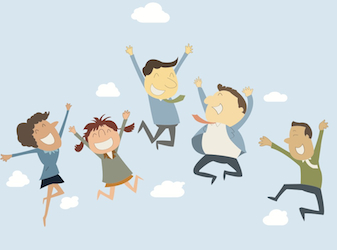 Staff morale is frequently discussed, with plenty of articles and opinions on the best ways to achieve this from an employer’s standpoint. But in this article Mat Jacobson considers the topic in a slightly unusual fashion, asking, “Who is really responsible for building staff morale?”

The answer is seemingly so obvious that this question never gets asked. Most people would assume it goes without saying that an employer should spend a lot of time and effort in building staff morale. However I have a view that is quite different. The topic of how to build staff morale has implicit connotations we should first think about. The inferences are that an employer is in some way privileged to have staff arriving to the workplace and being permitted to pay them for their efforts. The proposition from employees is that turning up is some fundamental right and their employer should do a lot more if they actually want to get the most out of them.

I find this whole premise a somewhat unfortunate aspect of the Australian workplace. In travelling around the world, being exposed to many cultures and employing staff in developing countries like Zambia or other established economies like the USA, the assumptions in many countries are vastly different. In most cultures, having a job at all is a privilege, having a well-paid job with security and a fair and reasonable employer is a downright luxury.

When I began to write this article, I was also coincidentally reading an article in The Age newspaper discussing staff attitudes in the workplace. A number of interviews were done with employers which contained quotes such as:

“Our staff are constantly telling me when they can and can’t work; not this day, not these hours, not if a music festival is on…” and then the employer points to a Filipino worker saying, “See that guy? He has been here two and a half years, never complains and hasn’t taken one sick day.”

The very real and concerning part of that article was that employers are moving to employ more and more non-Australians. This is a trend that has serious implications for existing and potential workers. The answer will not be found in trying to limit an employer’s ability to hire migrant workers or Australians of migrant descent despite the ‘foreigners are taking our jobs’ argument that is often posed. I don’t believe employers are deliberately discriminating for or against Australian workers. I believe they are simply discriminating between a worker who has a great appreciation for the opportunity they are given, who is willing to put in the hard yards, versus an employee who moans about needing to work when there is a music festival they want to attend.

Has the pendulum swung too far? Am I suggesting employers should be at liberty to completely take their staff for granted? Of course not. It’s simple commonsense that we should communicate effectively with staff, be encouraging, value their contribution, reward great effort and provide opportunities for personal and professional growth. We don’t need an Oxford professor to tell us that. But it is also true that this is absolutely a two way street. I don’t recall seeing too many articles pitched to workers discussing how important it is to work hard or how to demonstrate appreciation for the opportunity of a great career.

We have in our Ducere office, staff from Australia, India, France, the Middle East, the US, the UK and more. As with any workplace, there are staff who rise to the top and those who fall to the wayside, Australians and non-Australians alike. Does that have anything to do with the colour of their skin or their accent? Absolutely not. It’s about the attitude and mindset of the individual staff member. Whether they are driven, motivated and passionate about succeeding; looking to advance their career through further tertiary study or training, or whether they think that arriving only five minutes late isn’t that big a deal.

For too long the role of employer/employee has been too much of a boss/subordinate relationship. Although an organisation chart may show a hierarchy, in the real world we are all equal as human beings and we should each be treated as such. In that respect, employees should not be merely waiting for motivations, incentives and encouragements to do the job they were employed to do (although there is no reason why an employer shouldn’t provide these incentives as well.) Employees should take on the responsibility of ensuring they bring the right mindset to the office, that they are bringing their A-game and are there to make a difference.

BY ON 30 July 2014
Mat Jacobson is the founder of Ducere, a global education company delivering the world’s most innovative business courses online. He is also the founder of the Ducere Foundation, working with African governments to improve the quality of education in third world countries.

« Byron Sharp: Behavioural economics is not the biggest story in marketingShaping defining moments in the customer lifecycle »