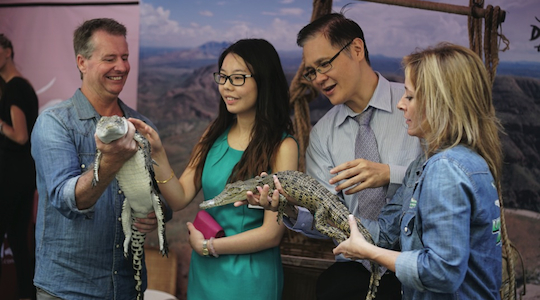 Tourism NT engaged Bastion EBA to activate its partnership opportunities, resulting in a series of campaigns promoting the territory as a corporate and leisure travel destination, particularly for business events and conferences.

Campaign: ‘Do the NT’ activations and sponsorship

Tourism NT’s long- held ‘Do the NT’ positioning had encouraged people to experience the territory by sharing inspiring imagery of the picturesque area. Previous campaigns had successfully imprinted images of the location’s landscape into the minds of consumers and NT was looking for the next step.

Bastion EBA was engaged to activate NT’s partnership opportunities, creating a series of campaigns to increase the likelihood of people visiting the area for work and recreation.

In a statement, Adam Giles, Chief Minister of the Northern Territory and Minister for Tourism, said the Country Liberals Government was looking to grow the territory’s visitor economy to $2.2 billion by 2020.

NT had enjoyed increased visitation numbers of holidaymakers and was looking to increase the number of corporates visiting the area for business and conferences.

Specifically, NT was keen to:

Bastion EBA created a sponsorship plan to target corporates and educate the wider market regarding the territory’s versatility. The agency knew the way to reach the target markets would be to communicate the hidden benefits of the area; its comprehensive conference facilities and the wide range of activities available in the area, suitable for both young and old.

Having lived in the territory for six years, Bastion EBA director Michelle Cox knew that many people associate the area with visually stunning landscapes. It is high on people’s lists of desirable places to visit, but the key is converting them to travel now.

Bastion EBA wanted to bring the experiences to life, so the sponsorship strategy was around communicating both the business amenities and adventure experiences available in the area. 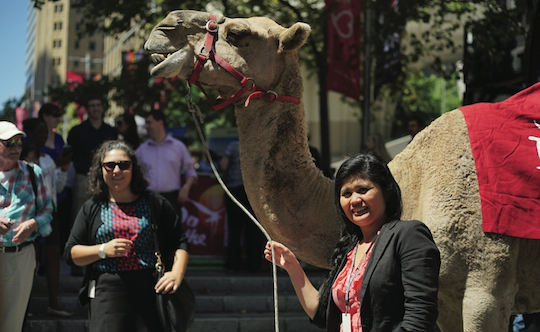 In 2014, Bastion EBA had successfully delivered a ‘Taste of NT’ to the fans of Melbourne Football Club, the Demons, bringing in real live territory ‘locals’ for Melburnians to meet. Crocodiles and camels offered fans the opportunity to take selfies with the animals, and get a feel as if they were in the area.

In March 2015, Bastion EBA extended this activation, creating an Outback Watering Hole right in the middle of Sydney’s business district at Martin Place.

The pop-up pub provided a range of experiences unique to the NT, including local NT draught beer, crocodile salad, barramundi fish and chips, and a camel burger. Visitors could ‘pose’ with camels and crocodiles and superimpose their image to share on social media.

A big screen showcasing the NT’s ‘virtual tourist’ footage gave visitors a first-person feel of the area, supported by on the ground prizes and giveaways distributed throughout the activation.

Bastion EBA brokered a 12-month partnership with the fast-growing business networking group, Business Chicks, to communicate the assets Tourism NT has on offer to a different corporate audience, recognising that corporate visitors to the region are likely to spend up to four times more than recreational travellers. So affluent, high-earning decision-makers were targeted in the partnership.

Bastion EBA has done a lot of work with Business Chicks, which has 35,000 highly astute, educated and impressive members, making it the right partnership to help reach key decision-makers in the corporate segment.

The partnership included targeted exposure to the membership at motivational speaker events, database communications, branding, advertising and signage, banner ads on the website, event tickets, workshops, tickets for their clients and VIP passes, as well as digital and social media activity. 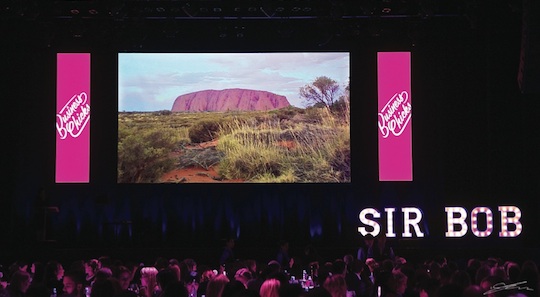 In March 2015, the Melbourne International Flower and Garden Show (MIFGS) attracted over 100,000 visitors over five days, from Victoria, interstate and New Zealand, making the event a great fit for NT’s objectives.

Bastion EBA created the concept for ‘Bronzed Brolga’, a Tourism NT themed garden, based around the area’s key attractions. The partnership included cooking demonstrations to showcase foods unique to the area.

On the day of opening, Bastion EBA’s activation attracted the attention of Channel 7 news, which covered the installation. Visitors were additionally incentivised to share details with NT to enter a competition to win a trip to the area.

Each campaign was measured overall in terms of numbers, and separately in lead and data capture. Fundamentally, it’s about how many conferences, events and holidays are booked and how many more people visit the territory for business or a holiday.

A large element of this also includes B2B communication too, ensuring such operators had another tangible way for people to see, experience and touch their product.

On a local level, each campaign had sub-objectives around increasing visibility of the territory, increased awareness of the area’s offerings, increasing the depth of understanding consumers have about the area and smaller things such as data capture, to continue the conversation after each campaign finishes.

NT is at the beginning of a long-term partnership, which will increase the amount of people visiting the area, indicating it will be possible to review the increase of visitors after 12 to 24 months.

In 2015, Business Chicks is on track to launch over 70 new events and Tourism NT’s partnership directly contributes to its target, working well for both parties.

« Quick, easy and cost-effective: how SMS marketing is cutting through the clutterText is the new gold in data-driven marketing »