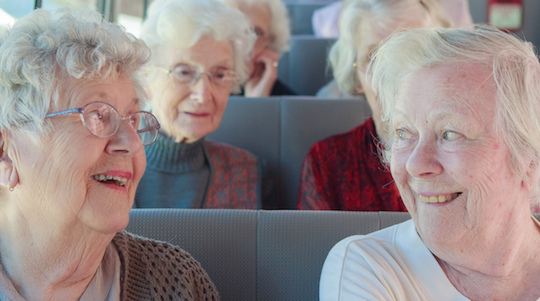 This marketing case study goes behind the scenes of the local, small-budget campaign by Western Australia-based aged-care provider Bethanie that got a 306x ROI and won the small-budget category at the 2015 AMI Awards for Marketing Excellence.

Campaign: Geographical expansion on a budget

As Australia’s population ages, services for the elderly are becoming more and more important. One major component of this is at home care – designed to allow people to live well in their homes. This style of care not only ensures that people stay safe and healthy, it also allows them to maintain ties with their communities and remain at home for longer – the goal of many aged citizens.

Bethanie has been involved in aged care since 1954. Being aware of the ongoing need for care at home, Bethanie conducted a marketing campaign in 2014 to help improve aged care in the South West region of Western Australia. Bethanie’s relatively small South West Community Care brand is a 24-hour business, providing care to the elderly from Geraldton to Bunbury. It operates in over 22 locations, servicing the many needs of elderly people in the Western Australian community.

In March 2014, Bethanie expanded its reach to the town of Harvey. With new aged care vacancies in the Harvey region and only $1500 of marketing funds available, Bethanie needed a smart solution to fill these placements and ensure that customers in need were aware of the aged care at home services available to them.

The Bethanie brand did not previously sit within the Harvey market, so the organisation had relatively low awareness in the region. Add to this a general confusion within the category around what aged care services are available, how much they cost and how to access services, and Bethanie had a real challenge on its hands within a very tight budget. This was considered as part of the marketing plan.

The main objective of the campaign was to expand Bethanie’s reach into the town of Harvey, building awareness while also reducing the confusion surrounding aged care services – positioning Bethanie as an accessible answer to customers’ aged care needs.

at home) and their families. It was imperative to work out how best to explain delicate and sensitive information about services, such as dementia support, in words that someone with no exposure to aged care could easily understand.

The main challenge faced by Bethanie was that there was no funding for independent market research to be undertaken, so to overcome this issue the Bethanie South West team asked their existing clients and their families where they would look for information on these services and how to best explain them. This ensured the information put out was relative, sensitive and placed in the right media.

In an age of digital media and big data, the answer was surprisingly traditional: classified ads and aged care expos were by far the most common responses received by the team.

Success of the campaign was measured by the uptake of Bethanie services within the Harvey region post campaign.

The strategy for this campaign was to maximise value on a minimal budget. Through savvy, grass roots marketing techniques and community engagement Bethanie achieved the full occupancy it required in the region. Bethanie created a classified advertising program and committed to a simple advertising campaign in the Harvey-Waroona Reporter newspaper. The limited funds available only allowed for two weeks worth of ads, spread out over one month, but the ads were simple, punchy and employed lots of simple bold text and white space to make them stand out among the clutter of the newspaper.

Bethanie decided on this newspaper for various reasons.

Consumers can access the paper free of charge and it attracts great attention from the senior market. The paper, which has a circulation of 8367, is distributed over the entire Harvey area, as well as smaller towns in the South West region of Western Australia, hitting all the areas eligible for the new services.

Bethanie also relied on its South West Community team to distribute the additional Bethanie Aged Care ‘At Home’ brochure, which was sent to community and health centres as part of an outreach program to build relationships with other healthcare professionals and providers.

The whole campaign ran for four weeks in March 2015. The advertisement was very simple, in Bethanie branded colours, and clearly listed the services offered. It included contact details and the location of the South West Community Care office located in nearby Bunbury.

Through promoting community service at South West events and expos, the local team pulled together and quickly built relationships, primarily with the Harvey Hospital and the Harvey Council to help build awareness within existing healthcare services of the Bethanie at home care packages. Further relationships were created with local doctors’ surgeries.

Access to this expo was free, both for Bethanie to exhibit and customers to attend. Both expos were a great opportunity to discuss Bethanie’s services and hand out brochures and items (branded pens, notepads, brochures and flyers). These were acquired with the remaining budget, as well as utilising existing older stock that was due to be replaced (with a new look) the following year.

Bethanie’s existing Google AdWords campaign was also tweaked to include specific searches aimed at aged care and geo-targeted to the South West Western Australia region. Keywords such as ‘dementia care’, ‘dementia support’ and ‘aged care’ were targeted to the region.

Bethanie used its budget of $1500 to deliver a return on investment of 306 times. Online the campaign recorded a 230.63% increase in new searches for Bethanie South West Aged Care when compared with the same period the year before. Further web traffic improvements were seen, with the bounce rate decreasing by 49.04% suggesting more targeted searches were being correctly directed to the Bethanie website.

Not only did Bethanie achieve the full occupancy it required in the region, the success was so great that Bethanie expanded services in the South West further, including growth in Bunbury and expansion south to Donnybrook.

The campaign was recognised at the 2015 AMI Awards for Marketing Excellence, winning the budget category.

« A start-up view of first mover (dis)advantageAre you firing on all cylinders? »