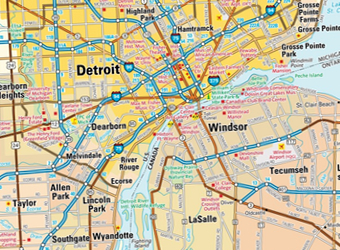 There’s more to the motor city’s rebirth than cheap rent and government subsidies – but you’ll need to bring your own dash of cool if you want to replicate the experiment yourself, writes Barrie Seppings, in this post looking at branding lessons from Detroit’s revival.

It’s hard to imagine two locations more different than the French Riviera and the crumbling, dystopian, bankrupt heart of American automobile manufacturing, but the morning in Cannes belonged to Detroit, at least for a moment.

‘Pride’ is a word that was hardly uttered during the session at the Cannes advertising festival that focused on the creative rebirth of the city, but you could tell it explained everything about Detroit’s revival. The small and well-prepared panel included Detroit music luminary Carl Craig, Lowe Partners chief creative officer Jose Miguel Sokoloff and Detroit native and chief creative officer of Lowe Campbell Ewald, Mark Simon.

The discussion got going with a look at Simon’s agency and why it decided, after several decades out in the suburbs, to move back into the ‘crumbling heart’ of downtown Detroit a couple of years ago. Their first winter was a bleak one, surrounded by boarded up shops and empty office buildings but, as Simon explained, that first turn of good weather brought people back to downtown – a migration that has been gathering momentum ever since.

The rest of the talk skipped pretty briskly through a slew of examples of the ‘lots of good stuff happening in Detroit right now’ – a phrase that has almost become the de facto tagline during Detroit’s revival. From the small-scale manufacturing renaissance of Shinola (watches, bikes and fashion from the people behind Fossil) to start-ups, recording studios, civic art projects and music academies, the people of Detroit are working very hard at a hipster-led, rebranded revival of their city.

The one case that really stood out was of the young designer who prototyped a winter coat that doubles as a sleeping bag, designed expressly for the homeless to not only wear, but to be part of the manufacture as well. She has since received grants to scale up her operations and introduce proper training for the women how are now her full-time employees. It was a great case of looking at a problem from multiple angles, and designing a solution that works for almost all of them, simultaneously.

I was hoping to get some insight to apply to other cities facing a decline of economic activity precipitated by the sudden pullout of a dominant industry, but it does seem that Detroit was built to survive. It was many things before it was the car factory of the world and its musical legacy in particular (from blues to Motown to techno and, more recently, EDM), is a cultural industry in its own right. It’s hard to imagine Geelong, for example, offering similar cultural raw material for the branding mavens to work with.

There is more fuelling Detroit’s revival than cheap rent and government subsidies. The very idea of Detroit appears to be an emotional touchstone for many Americans and the turnaround is as encouraging as it is inspiring. Will the brand-led renaissance extend beyond single-origin coffee, fixies and full-sleeve tattoos? Only time will tell.

BY ON 25 June 2014
Barrie Seppings blogs about making things better – for clients, brands, agencies and humans. He is currently regional creative director at Ogilvy Singapore and he likes boards surf, skate and snow. Follow him on the Twitter, connect on LinkedIn, or add him on Google Plus.

« Knowing where to focus your attention in businessBrand chatter: the three principles of ‘always on’ communications »