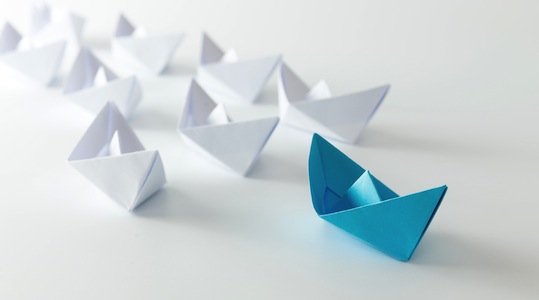 As a brand strategist, a key part of my role involves challenging and questioning the status quo. A healthy disrespect for the way things are done is a trait conducive to finding new and disruptive ways of doing things. I was eager to put this into practice in Australia. A country with a rich pioneering spirit, rampant competitive mentality and heritage of inventiveness, Australia is a natural home for challenger brands.

However, it feels as if Australian business has lost its impetus for change, challenge, risk and innovation. If we are to believe Plato’s adage “necessity is the mother of all invention” maybe it was the ‘tyranny of distance’ that initially stimulated early innovation, and the shrinking of the world due to modern communications and technologies that has restrained it. Or perhaps the fact that Australia emerged relatively unscathed from the global financial crisis meant there was little need to change or innovate.

Mike Smith, CEO ANZ Banking Group was recently quoted as saying: “The biggest threat to Australia’s economy is complacency”. Looking across different sectors, it is alarmingly clear that the temptation for complacency must be high.  Many sectors are dominated by cosy duopolies – in retail it’s Coles vs Woolworths, in telcos,  it’s Optus vs. Telstra, in insurance we have Suncorp vs. IAG and airlines Qantas/Jetstar vs. Virgin Australia. Although each competes vigorously with the other on price, there’s very little – beyond the functional – to differentiate the established players, especially in the services they offer and the experiences they provide. Companies have fallen into a trap of just aping their closest rival – ‘Cheap, Cheap’ for ‘Down, Down’ as one example.

These markets are ripe for disruption.

Aldi is one interesting entrant that has shaken things up. Aldi, by carving out a strong alternative position has been playing a clever game, and in doing so has elevated the conversation around the grocery sector to an emotional playing field. Aldi’s customer value proposition isn’t only one of price, but also of choice and discovery.  Ultimately, Aldi trades on the promise of pride.  Their invitation to be a ‘savvy shopper’ challenges stale brand perceptions of the grocery sector and provides shoppers with a real alternative.

With Aldi’s expansion into Western Australia and South Australia, and Lidl’s potential entry, surely the stage is set for some interesting movement.

Another refreshing brand that has sent shockwaves through its sector and beyond is Netflix. Netflix demonstrates how successful innovation comes from breaking norms and conventions of the category.  As a response to changing behaviours and ailing linear TV viewing, Netflix has redefined how we view content. In doing so, it is now setting the gold standard of the viewing experience.

So in all of this, where are the Australian challenger brands?

I wonder if without the impetus from outside forces, we’d be happy to continue to make do with what we have and let the dominance of the established brands go on unchallenged. Without Netflix, we’d still be the biggest perpetrators of online programming theft in the world. It is estimated that Netflix already had 200,000 illegal but paying Australian subscribers.

We mustn’t let complacency win. We must continue to challenge and question the status quo. Let’s support and encourage Australian companies to challenge themselves and the very core of their category to constantly look at how they can play a role in making things better. Let’s make sure Australia’s rich pioneering spirit doesn’t become a chronicle of the past.