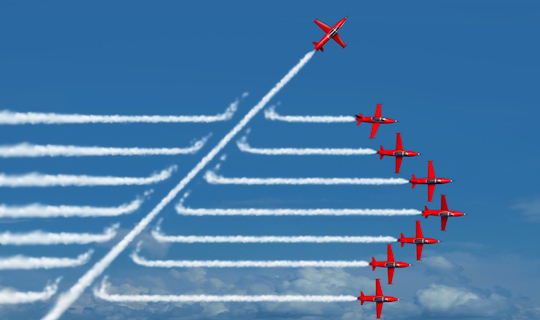 Dr Ken Hudson shares eight pieces of advice on being disruptive – to yourself.

‘I try and drive this notion in the organisation that unless we’re constantly thinking about how we disrupt ourselves someone will come along and disrupt us.’

But how do you disrupt your own existing brand or business?

How do you engage the rest of the organisation and say to them, what has worked in the past will not work in the future?

And lastly, how do you move from thinking to action?

These are the questions that astute leaders and brand owners increasingly need to confront.

The business-as-usual response might be to look to the innovation department, for example.

But disruption is far too important to be left to one area nor are most innovation staff equipped to deal with such dramatic transformation.

There is a world of difference between looking for ways to improve an existing product or service to totally reinventing the customer experience for example.

So what to do?

Here are a few disruptive suggestions.

I really like Simon Sinek’s simple and engaging approach when he suggests that any leader should ‘start with why’ (rather than how or what) when talking about change or leadership.

Disruption by its very nature is well… disruptive.

Hence disruption needs a clear and distinctive ‘why story’ to convince the rest of the organisation that a brand, business, product or process that has been successful in the past needs to be disrupted and it has to happen now!

Leaders have to talk about disruption loudly and often and articulate consistently why it is important.

If it can happen to them, why not you?

It’s why start-ups find disruption so much easier.

As Peter Thiel, the co-founder of Paypal highlighted:

“A new company’s most important strength is new thinking; even more important than nimbleness, small size affords space to think.”

2. Ensure that every leader has a disruptive goal

Now we are talking.

Imagine if every leader had to define an annual disruptive goal for their role and then try and deliver on it. Not to mention encouraging them to measure, learn and share their journey.

The disruptive goal could be big or small it does not matter as long as it’s a significant departure from what has been done in the past and ideally leads to a dramatic improvement.

Any big change needs someone (or some team) with authority to provide the vision, energy and passion to get the program off the ground and to combat the status quo.

Appointing a chief disruption officer says to the rest of the organisation that disruption is on our doorstep and we have to embrace it now rather than some time in the future when it might be too late.

“The Australia of the future has to be a nation that is agile, that is innovative, and that is creative. We can’t be defensive, we can’t future-proof ourselves. We have to recognise that the disruption that we see driven by technology, the volatility in change is our friend if we are agile and smart enough to take advantage of it.”

The chief disruption officer can synthesise the latest technology with consumers and add in their own creativity to create new growth opportunities or better prepare the organisation against future disruptive threats.

4. Identify and harness the disruptors in your organisation

I worked in various large organisations for 15 years but I never really felt that I fitted in. I always wanted to challenge the status-quo, make things better and start from a blank piece of paper.

This frustrated many of my colleagues.

And yet, when they needed some great, big ideas or new ways of solving a problem they often came knocking at my door.

I loved when this happened. But it was rare and for the most part my working life as a disruptor was a lonely one.

What if, however, you could identify and harness the other disruptors in the organisation?

Imagine if you can utilise their non-linear thinking and apply it to creating a completely new opportunity or disrupting an existing product, process or consumer experience and make it 10 times better? (The idea of making a situation 10 times better was originally developed by Michael Hewitt-Gleeson and now used by Alphabet [Google] for example.)

5. Run a disruption day every quarter

It could be in the form of a Hackathon or Ideathon but for one day a quarter everyone in the organisation should be thinking about disruption.

Ideally the Hackathon should be centred around a demanding yet important business challenge – for example, how do we reduce our customers’ waiting times from five minutes to five seconds?

Notice in this example how asking a disruptive question will increase your chances of generating a range of disruptive answers.

Disruption can be daunting.

This is why focus is important. PayPal for example, concentrated on disrupting the payment process not the entire banking system.

Select a single process, procedure, product or consumer problem that has been ignored or not changed in the past, say, three years.

Select one, disrupt it and make it 10 times better and move to another project.

But for the journey to succeed it needs to be kicked off with a series of small, quick wins.

7. What’s your next version?

One of the disruptive practices that companies such as Apple do is to continuously introduce their latest version. For example, the original iPhone was launched in 2007. Since then there have been 11 versions over the past eight years.

Apple does not worry about cannibalising their own product range. Much better, they argue, for them to do it rather than anyone else.

8. Fund a series of starts ups

Many big companies have dollars and office space which is what starts-ups crave. But starts ups can have transformative ideas and agility to pivot on a dime.

Combining the two can be a viable, effective strategy to build disruptive brands and better prepare for new threats.

Disruption is coming to every role, brand, business, category and industry.

It’s just a matter of time.

For example, I just received a home and contents insurance bill for over $3000.

My first thought was this was excessive.

My next question was, why doesn’t someone disrupt this industry?

If I have thought this, perhaps others have as well.

You can wait around or you can start disrupting yourself before others beat you to the punch.

And with Prime Minister Malcolm Turnbull’s recent innovation statement, the ability of startups to knock over an established business is now much greater.

Disrupting an existing brand or business can be done. It’s not a mysterious ability only available to startups. It’s a process, set of skills and tools, which anyone can learn.

And size is no excuse.

Anyone heard of Apple or Dyson or Google or Facebook or Amazon?

BY ON 10 December 2015
Dr Ken Hudson is a former marketing director (Amex) and has a PhD in organisational creativity. He is also the inventor of creative thinking tool, Blitz (www.letsblitz.com)