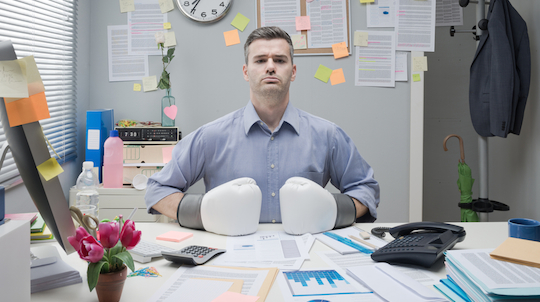 Survival starts on the inside, writes Steve Sammartino.

I invest a lot of time working with companies born of the industrial era, and the questions I get asked most often are, ‘Can you please give us an example of a company that survived and thrived as their industry was disrupted?’ and, ‘What should we do to ensure we don’t get disrupted?

Survival rule number one: Culture is the core of change, technology is just a tactic

In truth, there are some answers to these questions. But here’s what they’re really after: ‘Please tell us a simple story of a company where everything turned out OK, so we can all relax and avoid uncomfortable decisions and changes.’

This is the key danger most legacy companies face. They ask for examples and strategy, but they rarely want to do the work and make the changes that would make such a strategy a reality. They rarely want to face the blood, sweat and tears that go with radical change. They want to maintain profits and growth while transforming and rebuilding.

But if we look in the physical world around us, it’s very rare indeed to be able to rebuild without deconstructing something first. Radical change most often involves things large companies hate, like short-term losses, revenue decline, structural change and cultural upheaval. Things that get in the way of the story we want to tell ourselves, that it’s just a matter of good strategic ideas.

The truth is that knowing what to do is the easy bit. The technology and its infinite possibilities is actually the simple part of the disruption equation.

Where the shortage of information resides is in the way companies need to change internally to be able to make that curve jump. The complexity of people and how they interact internally is all too often an afterthought. Yes, the really difficult part is implementing the change, and changing the culture and the internal dynamics that facilitate the new.

When we think of innovation and disruption, our business brains are automatically trained to bethink the marketing and/or innovations departments. Maybe even the CEO has an opinion or two in this arena. But anyone who has spent any amount of time trying to bring new initiatives to market will know that nothing happens without the funding or the approval of the financial gatekeepers. If the idea doesn’t fly, at least on the dreamed up financials, then it will never happen, regardless of how game changing it may be. This would usually be a prudent financial strategy. Why launch anything new when the numbers don’t stack up?

One of the favourite analysis methods of every CFO since the dawn of the industrial age has been this: only ever launch a new product or service if its margin is greater than the products it cannibalises. This used to be true. It’s a classic strategy from the Harvard Industrial playbook or the we-know-the-rules-of-business cohort. It’s a mentality that has passed its use-by date.

Now, the finance department needs to understand how disruptive technologies are starting to redefine monetary prudence. The financial analysis to approve innovations shouldn’t focus on the internal rate of return, but the external market reality of innovation within that arena today. It’s more about understanding the cost of innovation for companies and start-ups without legacy infrastructure, as this is what guides where the market actually ends up.

The reason start-ups are doing so well is that they have a fresh start with what seems like, and is, an unfair financial advantage. And while this may not suit an existential corporate infrastructure, failing to recognise the reality of lower margins is what leads to disruption as much as creative new consumer solutions.

We need to add to this equation the new technology mantra of connecting first and finding revenue second. It turns out that many technology companies and venturefunded start-ups don’t even have a business model aligned to their innovation. It means that the CFO needs to both understand the possibilities of a new consumer connection and have faith that a revenue model will be found once the connection void is fi lled. A very tough call, indeed.

Survival rule number three: Unless the CEO’s own financial well-being is tied to long-term success, they will never drive the cultural change needed

In the old maritime tradition, the captain goes down with the ship. The captain holds the ultimate responsibility for the ship and everyone on it. It’s their job to save it, even if that means dying in the process of trying. This does seem somewhat counter to what we see in corporate society these days. In fact, the captain may just throw people overboard to keep it afloat. He may wave down a passing ship and get a pay rise as its captain or he may procure his own life raft filled with the jewels from the journey when the ocean gets rough.

The analogy raises the elephant in the boardroom when it comes to disruption: if CEOs can leave at any time, how is it possible for them to be aligned with shareholders to transform an organisation under the threat of disruption?

It comes back to the original premise of this article: significant strategic change and disruption survival must first begin internally and become a cultural imperative or they will never take hold.

It means that the incentives given to the leaders of the organisation will go a long way in determining direction and what gets approved. This is especially so if disruption is imminent, but yet to occur. And while any CEO worth their share options will cry foul at this synopsis, it’s simple to see how it’s hard for them to care as much as employees and shareholders do when the average Fortune 500 CEO earns $15.2 million a year, a mere 296 times that of the average worker within those companies. But it is not just how much the CEOs earn that matters, it is when the money actually gets earned. Why make risky decisions to shore up a company’s future if the next CEO can inherit that problem? It may just be better to cut costs and hit the numbers, even if it opens further the chance of disruption.

Disruption survival starts with the CEO. Unless the head of the business buys into the task of radical change, it will never happen. The culture of change won’t trickle down to the finance department, let alone the marketing department, unless an entire culture shift is evident.

In all forms areas of business, we are a function of what we believe. Our beliefs then form the culture that shapes behaviour and output. If we look closely at where we work, there is evidence as to whether a company will ever actually change in a way that would survive a market shifting disruption.

If a company can’t transform from the inside out, then disruption survival strategies will merely become a fantasy and corporate decorations for the annual report.

BY ON 26 June 2015
Steve Sammartino is an author and futurist who sees the world through marketing eyes. He has held many senior marketing positions and has also built and sold his own startups. His latest venture is Sneaky Surf, which is bringing technology into the surf industry. His new book 'The Lessons School Forgot: How to hack your way through a technology revolution' is out now through Wiley. Connect with Steve and see his latest projects and blog at stevesammartino.com