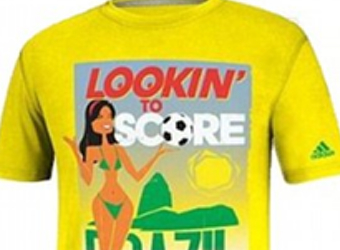 Interbrand’s Sergio Brodsky writes on Adidas’ controversial Brazil T-shirts and how brands can find themselves in hot water by neglecting to consider cultural sensitivities.

Answer without thinking: what are the three things that come to your mind when you hear about Brazil?

Carnival, football and women are the usual suspects, and not by chance.

Brazil has won more FIFA World Cup tournaments than any other country and has Pelé as the undisputed King of Football. Carnival is widely known as the biggest party in the world and… who doesn’t like a good merrymaking? Finally, Brazil probably has the largest and most famous list of female top-models.

But, does it mean a whole nation can be reduced to dance, play and flesh? And, how responsible was Adidas for designing T-shirts that lower Brazil to a sensationalist and sexualised level?

First and foremost, any sexist reference is, in principle, a flawed strategy for any brand to pursue. In the digital age, marketers must shift the perception from ‘selling to consumers’ to ‘talking to people’. Conversely, brands must also be equally aware of cultural sensitivities when playing outside their respective countries of origin.

On the other hand, Brand Brasil shares the responsibility of building its equities with clarity and consistency so meanings are not twisted. The controversial Simpson’s episode ‘Blame it on Lisa’ narrates a visit of the Simpson family to Rio de Janeiro. Besides commonplace clichés and stereotypes, sexual messages were also overtly featured. For example, Bart turns on the television in their hotel room and watches to a children’s show called Teleboobies that Marge criticises because of its sexual hints.

Skimpy bikinis may attract eyes but high-end swimwear brands like Cia Maritima, Salinas and Rosa Chá can attract dollars and euros. For those wanting refinement in beauty, jewellery brands H Stern and Vivara will spark your eyes. For femininity and delicacy, cosmetic brands Natura and O Boticario tick all boxes. From sleek Fasano Hotel, to ‘carnivalesque’ Havaianas flip-flops and cosmopolitan Itau bank – the ‘Global Latin American’ – there is an arsenal of brands that can portray the nation’s appeal simultaneous to contributing to its economy.

The above sounds quite obvious, yet brands have continuously failed to consider gender, cultural and historical sensitivities. In 2012 when Nike launched its ‘Black and Tan’ shoe on St Patrick’s day, an Irishman came out against it live on CNN. He asked ‘How would Americans feel if a brand named a pair of shoes Taliban?!’ For most people black and tan are just two colours but for those in Ireland it represents memories of the British paramilitary units that notoriously terrorised the civilian population during the Irish independence revolution in the 1920s.

Still, Nike was not the only culturally oblivious brand to commit such a gaffe. Ben & Jerry’s also released a ‘Black and Tan’ ice-cream flavour in 2006. Umbro named a trainer Zyklon, recalling the substance used in Nazi gas chambers. Blimey O’Reilly?!  Don’t these people ever use Google?

Accidents don’t just happen – they are caused. Adidas’ flop has hurt Brand Brasil, retailers and Adidas’ own reputation, without scoring any positives. It is time for commercial brands to learn from their mistakes and for Brand Brasil to better utilise its branded resources. There are more elegant and commercially effective ways for nation brands and commercial brands to harness the appeal of hot destinations to their audiences. By the way, did I mention I’m Brazilian? Wink. Wink.

Sergio Brodsky is associate director of strategy, Melbourne, for Interbrand.

BY ON 4 March 2014
Sérgio Brodsky (L.LM, MBA) is an internationally experienced brand strategist, a marketing lecturer at RMIT and chairman at The Marketing Academy Alumni.
He is passionate about cities and culture and the role of brands and technology in society, an intersection from where he drew inspiration to conceive a radically innovative approach to brand communications, he coined Urban Brand-Utility.
Connect with Sérgio on www.sergio-brodsky.com or through his Twitter handle @brandKzarglobal brand strategy and innovation. Follow him on Twitter: brandKzar.