Interview: Mark Kramer on the past, present and future of shared value

Interview: Mark Kramer on the past, present and future of shared value 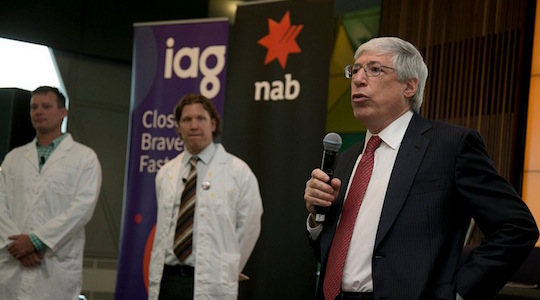 Mark Kramer, co-founder and managing director of FSG, speaks with Marketing about the evolution of shared value and the growing case for its potential to create profit, generate competitive advantage and help solve social problems.

In the five years since the publication of Mark Kramer and Michael Porter’s seminal article ‘Creating Shared Value’ in Harvard Business Review, the response around the business world has been “astonishing”, according to the former. Kramer has established himself as a prominent commentator on philanthropy, corporate social responsibility and, of course, shared value.

Major brands worldwide are adopting the model, building it into corporate strategy and finding new ways to make money by solving social problems.

One of the downsides to the concept’s growing popularity, says Kramer, is the stretching and mis-use of its definition.

In this interview, Kramer helps define shared value by offering examples, and demonstrates how, when executed correctly, it truly can solve social problems while benefitting companies significantly.

Marketing: Can you please explain how the terminology has been used in ways that weren’t originally intended?

Mark Kramer: I think there are a lot of people who think of shared value as just the latest term for CSR, or good citizenship. It’s not that at all. Shared value, first of all, is about having a measurable impact on a social issue, and secondly, about achieving positive economic return for the company and its shareholders by doing that.

You’ve got to have the business benefit and the social benefit together in order for it to qualify.

Second, what people don’t often realise is shared value is really about competitive strategy. It’s about how you find new ways to position your company and to differentiate it from other companies because of the social impact that your company is having.

M: On that topic of positioning and strategy, tying in with brand, is that one of the key distinctions? That is, philanthropy in the past might have just been the CEO’s favourite cause, whereas shared value aligns with the brand and business goals?

One of the best examples is Discovery Insurance. Discovery is a health insurance company that has developed a very sophisticated set of incentives that – drawing on behavioural economics – led their members to live healthier lives.

As a result, their members actually have a six year longer life expectancy than the general population, they get sick less often and they recover more quickly when they do. This is documented by a Johns Hopkins University study. As a result, the healthcare costs of discovery are about 15% less, Discovery is a more profitable company and the whole competitive differentiation is this set of incentives they’ve developed to lead their customers to live healthier lives.

So many companies think about philanthropy and corporate social responsibility in terms of their reputation and, ‘How do we enhance our reputation by giving to charity?’

But if you can find out what the social message is, the opportunity for positive social impact that’s embedded in your business, and then really build on that to differentiate your product or service from others, then you really have a strong brand promise that can drive business and drive social impact.

M: Tim Costello [who’d spoken on a panel immediately prior to this interview taking place – Ed] is a big voice, but in terms of being the sceptical party on the panel he’s representative of a much bigger group in every area of the stakeholder system – internally, externally, customers, partners. Is it a matter of that being tackled through education, or is the best education just a matter of getting results to show impact?

MK: It’s very much a matter of getting results. Nobody believes shared value really works until they actually see it in practice, and see it in practice in their own organisation. We’re so used to thinking that if you’re trying to do good in the world you can’t be serious about making money, and if you’re being serious about making money you can’t pay attention to that social stuff. It’s a cost, a constraint, etcetera.

It goes so much against the conventional mindset that says it’s about shareholder return, and as soon as you start talking about doing good you must be undercutting shareholder return. That’s maybe a philanthropic mindset, but that’s not a shared value mindset.

NAB Assist is a great example. When someone falls into debt, they get hit with all kinds of extra fees, charges and penalties, and typically you fall into debt not because you went on a spending spree, but because you lost a job, or there’s a health crisis, or there’s a divorce. You don’t fall behind on one bill, you fall behind on all of your bills, and then all of the fees begin to add up, and you get into this cascading pile of debt that becomes harder and harder to get out of.

Well, NAB said, ‘What if we actually sit down with people and work out payment plans and alternative arrangements for them when they begin to get into trouble?’ What they found is – they’re now working with thousands of customers – 95% of them are able to get back on their feet and become current within 90 days. It has saved NAB $60 million in bad debt losses just last year alone.

It is a tremendous example of a market failure. They figured you write off people with bad debt. But, the consequences for people’s lives are atrocious, and nobody really thought seriously about maybe there’s a better way to handle this when people fall into debt. It turns out there’s a new business model there, that is very profitable, and very good for the world.

M: That issue of profitability is a complaint from sceptical shareholders, considering a board and a CEO have a legal obligations.

I’m trained as a lawyer, and I can tell you that the popular perception that maximising the short-term value of shareholders is the primary obligation of business is actually not embedded in corporate law.

Business managers and directors are entitled to do what they think is in the best interest of the company, but with a longer-term perspective. They are not obligated to make choices that lead to purely short term benefit for shareholders at the expense of longer term opportunities. So, I think it’s much less about the law, and much more about the incentive compensation for CEOs.

Most CEOs now have an unfortunately short tenure of just a few years. The overwhelming majority of their compensation, certainly in the US, but in much of the world, is based on stock options. So, from the CEOs point of view, he or she has three or four years to get that stock price up to make his or her money.

That is really the issue that leads to some very bad choices. For example, a tremendous amount of money is going into share repurchases, where companies are buying back their shares. In the US it’s something like half a trillion dollars in the last year alone, that companies have spent. Now, it turns out that while reducing the number of shares by buying them back raises the earnings per share a little bit, it doesn’t have any long term benefit for the company.

In fact, there have been studies that say if you took the same amount of money, if you only earned a 2% return on capital. You would do as well, or better, as spending that on buying back your own shares. It is a lack of imagination and vision on the part of management that says there’s nothing we can figure out to do with our money to grow our business other than just buy back shares, and artificially pump up the earnings.

It’s because, I believe, of this incentive structure that we’ve created, that is so tied to short term stock price.

M: You mentioned during your opening remarks around the next step in the shared value story, and the idea of going beyond individual companies. Can you please expand on that?

MK: We’ve focussed a lot on what companies can do individually to create shared value, and there’s lots of opportunities to create new products and services to change the activities and value chain to find new opportunities and new competitive positioning through shared value. But larger social problems are beyond the control of any one company. Indeed, they’re beyond the control of business. They involve business but they also involve civil society and they also involve government.

The next step we’re beginning to see is companies leading cross-sector partnerships, where, if it is successful the company will be more profitable, it has opportunities to grow, to scale, et cetera. But, in order to really solve a social problem it has to change the broader ecosystem in which it’s operating.

We hadn’t really thought, initially, about the idea of companies being the ones to lead social change. We sort of assume it’s up to government to do that, or it’s what civil society’s all about. It turns out, companies have money on the table. If they can overcome market failures, they’ll grow, they’ll make more money. They have an incentive to lead social change. They also have the clout, the influence, the expertise, the scale, to be highly effective at leading social change.

So, we’re beginning to find a new role for companies to lead these cross-sector coalitions. To tackle really complex social problems, and make a huge difference in society.

« Find your females: what are they really saying about your business and brand?Ritson on brand: Marketers are being fed bullshit about social media »