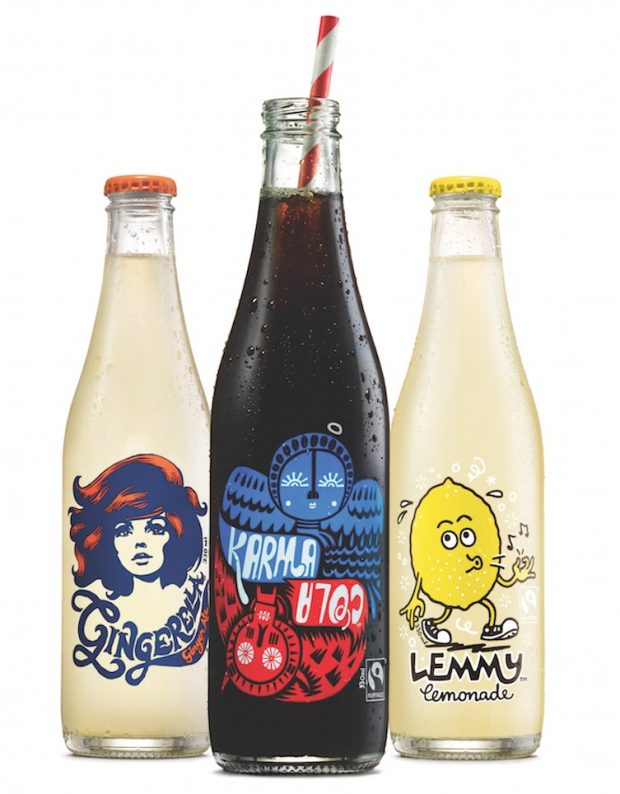 Karma Cola stands out from the world’s larger beverage manufacturers through radical transparency and disruptive design. Cofounder Simon Coley explains how those concepts work for the brand and how they play out in its content. By Peter Roper and Ben Ice.

Karma Cola was founded by Coley along with Chris Morrison, a pioneer of organic products in New Zealand, and his brother Matt Morrison, who had previously worked as a senior adviser in the NZ Treasury and was also an army officer.

Morrison is the financial director and disciplinarian. Coley himself has a background in advertising and product development, and an education in graphic design.

Their first venture into organic products as a team started with importing bananas from Samoa. This formed the origins of All Good, which still ethically imports bananas, now from Ecuador, and gave the trio the confidence to look at other products.

All Good’s positive message reminded Coley of the virtuous cycle of Karma and so Karma Cola really began with the name. Researching cola, they learned about the cola nut, which grows in abundance in West Africa, but is not actually used in many major cola beverages.

Before long, they organised to have five kilograms of cola basically mailed back to New Zealand and, after about 100 recipes, they had their product.

An exemplar of fair trade practices, the brand is committed to supporting the communities around the world where ingredients for its drinks are sourced.

While holding a very small part of the cola beverage market, Karma Cola is available now available in 13 countries, and through attractive, smart design, and brand storytelling through effective use of content and social marketing, the business is growing.

Commitment to giving back to the community in Sierra Leone, from where the cola is sourced, has been one of the most rewarding aspects for Karma Cola, and has formed a vital part of the brand’s message.

“We believe good design and good business is about more than looking good and making money, even though both of these help. It’s about doing good too,” says Coley.

As well as selling their cola, the grower communities enjoy the benefits of five cents from every bottle being invested in local projects.

Simply telling the story of this purpose-meets-profit venture, however, is not enough. To truly engage with their target audience, they must remain transparent.

“There’s this virtuous circle in that understanding of consumers being conscious of the impact of their purchases,” says Coley. This encourages endeavours to “make that supply chain as transparent as possible,” he adds. 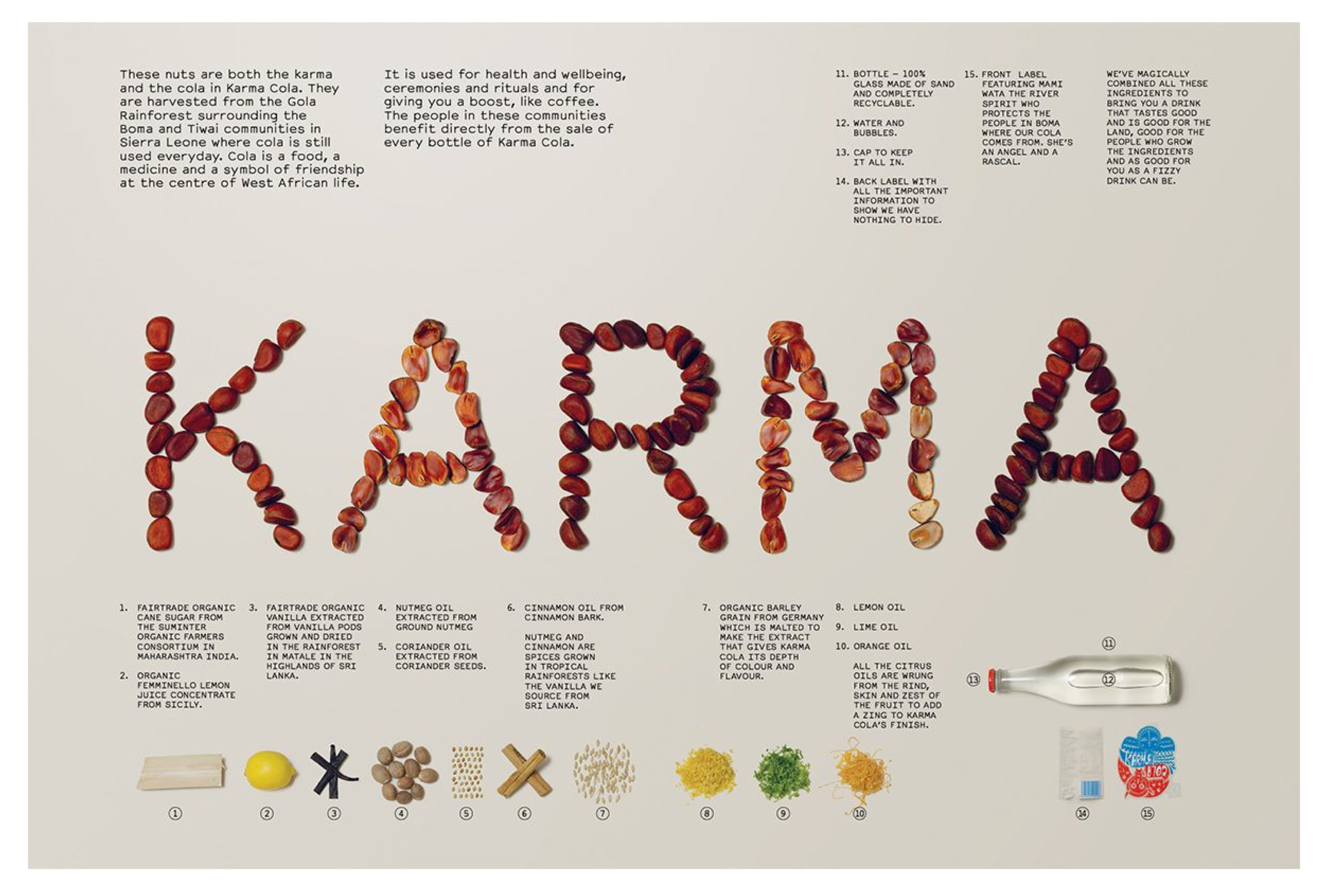 This transparency includes Karma making it very clear in its founding principles that it is not a charity, that it is a commercial venture. It does not determine how those who benefit from the sales of its products use their funds. The Foundation plans to be able to scale its growth by encouraging the long-term economic independence of the communities, as well as working closely with them to ensure they are not dependent on the Foundation, but are developing towards a sustainable future on their own terms.

In the very beginning, fair trade cola was unable to be sourced, so Karma Cola had to develop a fresh supply chain and establish the Karma Cola Foundation, a mechanism for distributing the proceeds. This earned the award of ‘World’s Fairest Trader’, by Fairtrade International.

The same fair trade business model is used to produce the brand’s other beverage products, Gingerella Ginger Ale and Lemmy Lemonade, with organic ginger and vanilla from farmers in Sri Lanka, sugar farmers in India and lemon farmers in Sicily.

Since bottling its first batch in 2012, Karma Cola’s business and funds have been used to build a bridge connecting the old and new villages of Boma in Sierra Leone, to send 50 young girls to school. It has also rehabilitated 12 rainforest farms, employed four teachers and more. 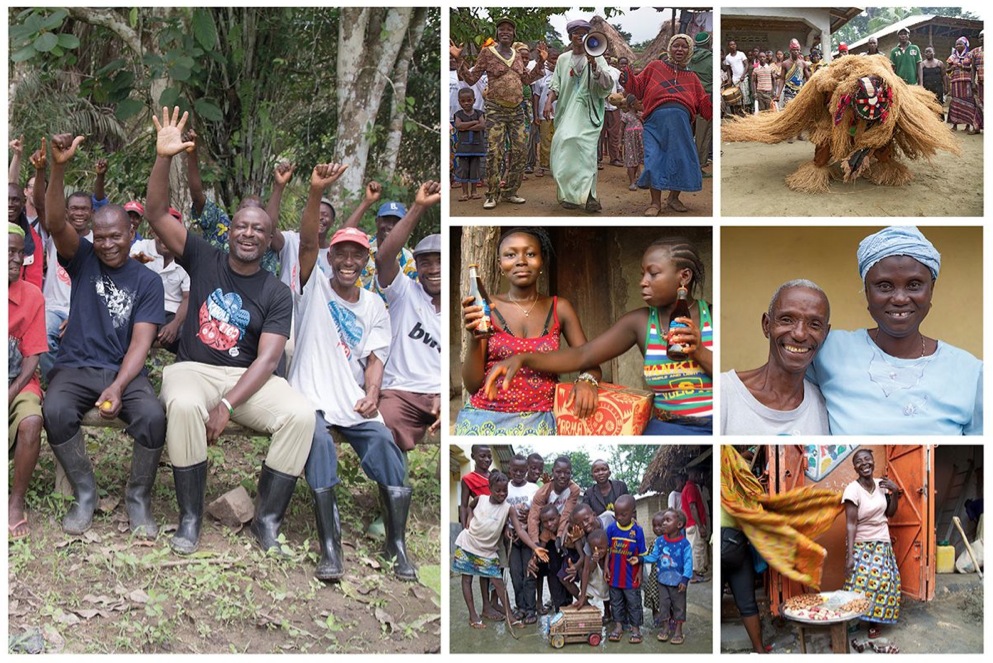 The business of growth, while remaining fair and transparent is a difficult, but vital and rewarding one, says Coley. “You should know what you’re drinking. Anyone selling food now owes it to their customers to be as transparent as they possibly can be. It’s a very different thing to deconstruct your supply chains. There are so many actors in those chains that synthesise products from different raw materials. It takes a lot more effort, but we think it’s worth it.”

One look at the brand’s range of colourful, creatively-packed beverages make it clear that design is a key element of the business. “Visual delight and stimulation is really important,” says Coley. “I think otherwise we would be a list of bullet points on the side of a pack. You can’t really expect people to change the way they think about a prolific product without doing it very differently.”

The brand aesthetic for Karma Cola is the result of good and bad, yin and yang, and karma. Good, because it’s fair trade and is only made of natural products; bad, because it’s a sweet, sugary drink, after all. “It does a hell of a lot of good because you’re consuming it,” says Coley. “That tension is great, and it makes for a more interesting story.” 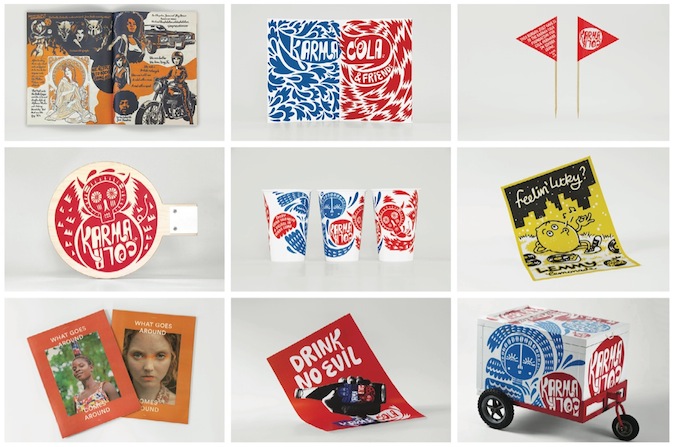 This led to the choice of Mami Wata as the label mascot. A water spirit from local folklore in Sierra Leone, she is a guiding light, but also known for mischief.

The Mami Wata design was developed as a collaboration between Simon Coley, The Special Group and Back Wheeler.

For Gingerella and Lemmy, the company engaged illustrators and, when things fell into place, Coley realised that every one of these drinks has its own personality.

The use of character mascots Mami Wata, Gingerella and Lemmy Lemon steals a little trick from magazine publishing, admits Coley. “If you have a face on the cover, people have to look at it. The more well-known the face, the more magazines you sell. I thought, ‘Why don’t we just try to engage people with their eyes?’”

“That’s working,” he adds. “They like the personalities a lot, helping people identify with the drinks, we did that.” 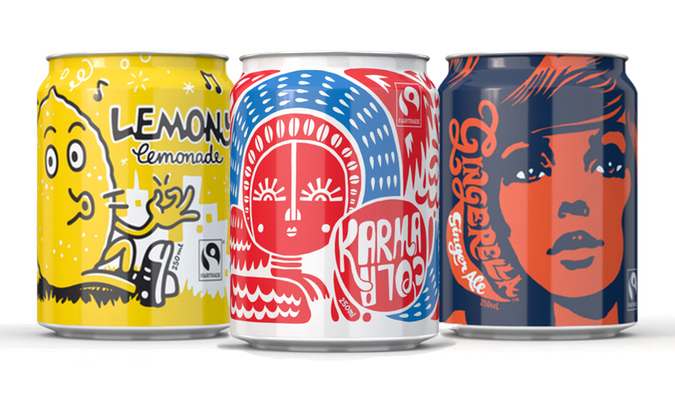 In the four years since the product launch, the design has made its way, in different variants, across an array of packaging. A more recent one Coley is particularly excited about is the cans. “There’s more real estate on a can. They really pop. They look great,” he says.

The small cans – 250 millilitres compared to the standard 375 millilitres – makes them more convenient for use in bars. Conversely, the benefit of bottle packaging makes it easier to push the message of natural products, particularly with the ginger ale and lemonade. “You can actually see the ingredients in them,” says Coley. “That really helps get across the provenance and the quality of the ingredients.”

Whatever the canvas, the purpose of all branded product is much the same, really. “You can see the name. What happens next is that you’ve got to want to taste it. All this label should do is make you want to take the lid off. Once you’ve tasted it, it should deliver that experience,” adds Coley.

The role of brand narrative

The brand’s story forms a large part of its content marketing. One quite literal example is the story of Coley’s first trip to visit Sierra Leone, where he was introduced to the local community and farmers associated with the product. It was about a year after the first batch, and six months after they’d started sending funds back to the community. “We walked in and there was a group of women from the village all dressed up to meet us at the head of the trail. They walked us down through the jungle to these drums beating. I thought, ‘Wow, this is a proper African experience’,” he says.

The hard drive full of videos and photos from this first visit, he thought, would be the perfect piece of content.

‘What are we going to do with it?’ I thought. ‘We could start talking to journalists, see if someone would publish the story. It’s about places you don’t normally go. It’s about a community and the culture of that community. It’s also slightly dangerous. Not many people get into Sierra Leone.”

Once the content was published, it was about spreading it as far as possible, first to the drink’s café distributors.

“I thought, ‘500 cafés, that’s our distribution. We’ll just take some magazines along with the product. The first thing we need to do is show those people in the cafés that selling our cola, ginger ale and lemonade has done this good’.” 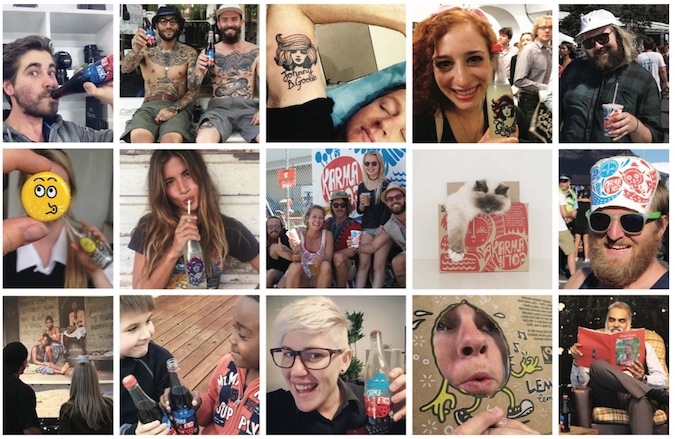 This practice of engaging people in cafés, people already consuming the beverage, has been central to Karma Cola’s branding, much more so than paid traditional media advertising.

“There’s a dry time, people are waiting for someone to turn up and need something to read,” explains Coley. This was enabling customers to read the story and be introduced to the brand. “We thought it reasonable to allow people to discover it for themselves,” he adds. “What’s the most efficient way to get people to understand what we’re doing, so they can help us tell a story?”

With such a strategy, social media also plays a key role, as those who’ve enjoyed the story, the design and the beverage, begin to share their experiences on various platforms.

This marketing strategy is also favourable because it is affordable. “We can’t afford it,” says Coley of traditional paid advertising. “It’s a constraint that’s useful. Even if we could afford it, people would say, ‘Why aren’t you putting that back into the village?’ 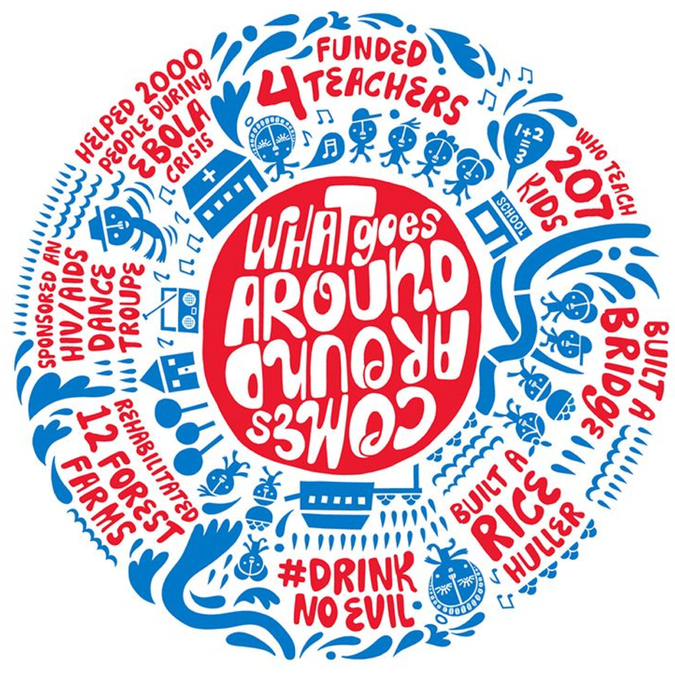 “I think maybe what we’re doing is fine. It does seem to work. It’s respectful to the amount of time and to people’s attention. If people are engaging with these stories and prepared to read them, then we should keep doing it.”

So, while Karma is unlikely to change its marketing strategy to include paid media advertising, the content space and strategy moves along as the company grows and new formats and products are introduced.

“We’re creating new product, or at least new formats for the products,” says Coley. “We’re trying to work out how best to get that in front of people. The key is engagement in the spirit of the brand.”

Long-form content provides the best avenue for this brand code, for two reasons.

One reason its it’s more likely than advertising to land on someone’s social media feed, “which is easily dismissed”, says Coley

The other, Coley says, is because it’s really hard to encapsulate all the facets of a brand story like Karma Cola’s – the sustainability, ethical, organic, respect to everyone on the supply chain and social justice – without plenty of room.

This article first appeared in The Content Issue of Marketing. Buy the issue or subscribe for more »