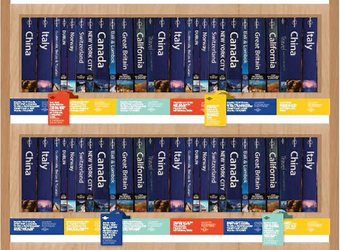 Starting with a beat-up old car, a few dollars in the pocket and a sense of adventure, Lonely Planet began in 1973 with a stapled and typed guide that Tony and Maureen Wheeler collated of their travels across Asia. Forty years later, Lonely Planet is the world’s leading guidebook publisher with more than 500 titles across 15 languages, providing travel advice and inspiration through books, web, mobile, TV, magazines and social networks.

In the year of its 40th anniversary Lonely Planet wanted to convey to readers that
it is more relevant than ever and reiterate the brand’s strength amid growth of other travel blogs and websites. The company saw a great need to celebrate the last 40 years of providing trusted content to its readers, promoting awareness of Lonely Planet as the top global guidebook publisher and as an opportunity to celebrate and inspire travel.

However, having to increasingly compete with emerging online sources, this year’s campaign was to remind readers that Lonely Planet is authentic (because its writers have experienced the adventure) and it has the tools and knowledge to empower readers to experience the world. In the year of its 40th anniversary, Lonely Planet reached out to E2 to develop a major marketing campaign to celebrate 40 years of the brand and to reiterate its relevance to travellers and to the travel industry.

E2 was tasked with developing a campaign that could speak to Lonely Planet’s two consumer markets: the retail stakeholder and the traveller.

The objectives were to: 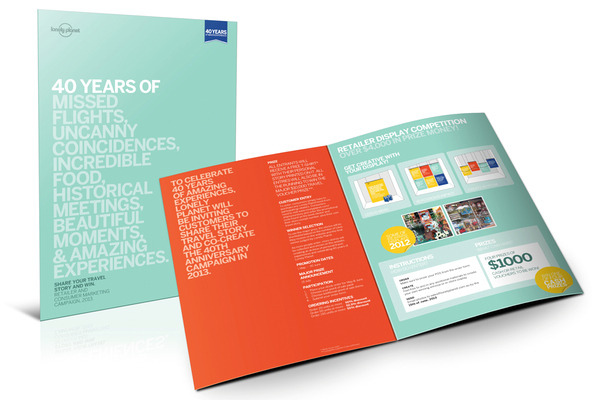 E2’s strategy engaged travellers, asking them to reflect on their favourite travel moments over the last 40 years. The idea was to collate and select ‘hero’ personal travel stories that could be utilised across different trade and consumer campaigns.

The travel stories assisted in building unique and personal narratives across retail networks through a brand campaign spanning online and in-store. They were to be utilised at the point of sale to drive customers in-store and to encourage them to enter their own personal travel stories via the microsite.

E2’s strategy of developing personalised branding meant that entrants and staff were able to customise narratives with their own personal travel stories, extending the brand footprint through people carrying the Lonely Planet message. The campaign enabled wider engagement and social sharing with family and friends on Facebook, strengthening the in-store retail campaign. Customers were taken on a journey and, as a result, travel was top of mind. 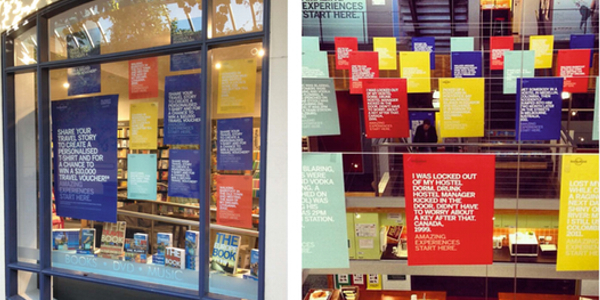 Rolled out from May 2013 as part of Lonely Planet’s 40th anniversary, the dynamic integrated campaign captured the heart and soul of the brand through the idea of encouraging consumers to celebrate and share their personal travel experiences over the past 40 years. Entrants were encouraged to submit travel stories online through lonelyplanet.com/shareyourtravelstory/au, as well as being given the opportunity to create their own customised t-shirt for free and enter a draw to win $10,000 travel money. Supported by a guerrilla execution using travel stories as content and branded communications in-store, a colourful and measurable narrative developed across retail networks and in above-the- line channels.

Retailers also participated in the campaign through visual merchandising in their stores with point-of-sale material. 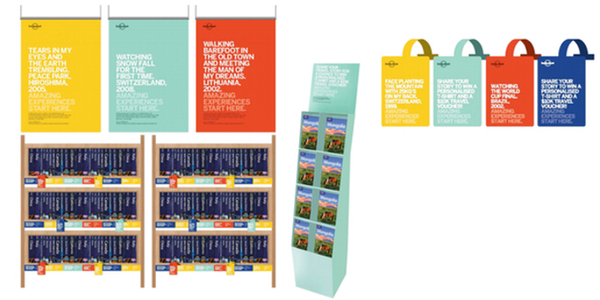 Following internal presentations, Lonely Planet offices in Asia, the United Kingdom and the United States also carried out E2’s campaign. More than 600 retailers participated in the promotion in Australia and more than 200 retailers in New Zealand.