What marketers need to know about artificial intelligence (AI)

What marketers need to know about artificial intelligence (AI) 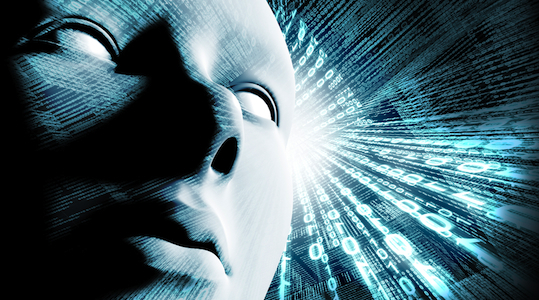 First it was big data, then content marketing. Now Mark Razzell is predicting artificial intelligence (AI) will be the next big thing grabbing marketers’ attention.

AI is a pipe dream that’s been around for a while and a long standing exploration for the storytellers in the sci-fi genre. However, it’s getting close to being a reality. As it gains traction, people in the field of marketing will undoubtedly get super excited about it. I predict it’s going to become the next buzzword and replace ‘content marketing’ as the next big thing that everyone is talking about. I don’t gamble, but I’m tempted to try and put money on that. So, with that in mind, I thought I’d take a perusal through some of the things you, as someone who works in the marketing field, should know about.

Why is everyone getting really excited about it?

Some pretty big advances in the field of AI have been made in the last few years, and there’s one major reason for that; investment. Skynet – sorry, Google – basically started buying start-up companies who work in the field of AI a couple of years back and, when Google backs something, amazing things happen. Facebook, Microsoft, and a few of the other giants have made forays into the field too, and people pay attention when these guys do things. IBM has actually been the major player in AI-related fields for a long time but they’re not sexy, so no one cares. Since the 50s, AI has pretty much been the concern of academics and super nerds. Again, not sexy, so no one cares. Make no mistake, though – those guys made huge incremental advancements in that time. Google and co. are just taking it across the finish line.

So, in short, it’s always been there and was always going to happen. Google and the others picked it up and people started to pay attention. Also, around the same time, Google bought loads of robotics companies, so journalists looked for an angle that would get the public to pay attention and now everyone is scared that robots will take their jobs.

Some really, super cool stuff. For example, Google has just created a neural network that plays computer games. It might not seem fantastic from words alone, but it taught itself to play. That is, frankly, amazing. It involves complex application of fuzzy logic (the appreciation that not everything is 1/0 (or black and white) which amplifies the complexity of equations/algorithms hugely). Also, and this is claimed to be a major differentiator for Google; they focussed on reinforcement learning, which means they only told it that points are good, not how to get them. That means you have a machine learning these games in much the same manner as a person. Awesome.

Perhaps one of the most famous AI systems is IBM’s Watson. Watson is a computer system that has done some great stuff. After its predecessor, Deep Blue, beat Kasparov in chess, the team behind it wanted another challenge. Watson was designed to play the game show jeopardy!, which it subsequently won. It is now being applied to healthcare, specifically oncology. Oh, and it’s a culinary genius.

[ed’s note: check out our stories on IBM Watson here]

For us lowly folk, the most immediate application of AI type stuff can be found with things like Siri and Cortana. While they can’t be strictly called ‘AI’, they do incorporate aspects of the field to better serve their purpose as personal assistants. Cortana is named after a character from Halo, which actually is an AI unit, so it is not unreasonable to assume that Microsoft ultimately see Cortana becoming a truer representation of actual AI. These programs can already make intelligent recommendations based on your previous behaviour, but are limited in their function, relying primarily on pre-programmed inputs.

Also, for you and me, one of the cornerstones of AI is prevalent in pretty much everything Google does. Deep learning, which is basically super-nerds’ attempts to make a computer like a brain, is fundamental to most of Google’s services; search, speech recognition, advertising, self-driving cars etcetera. Seriously, it’s now at the heart of everything they’re trying to do. Did you hear about Google’s consideration to start ranking pages based on facts rather than popularity? Deep learning techniques are at the heart of that.

What the hell is ‘deep learning’?

OK, the goal of artificial intelligence is basically to get machines to think like a brain. This is tough, to say the least. Deep learning is something you’ll hear a lot from people who don’t know what they’re talking about, but it has been described as the ‘launchpad for true AI’.

In many ways, the human brain and a computer work in a similar manner. A computer uses transistors (1/0 or yes/no) and the brain uses neurons (we don’t fully know, but assumed much the same). There are a few key differences (check out this infographic from Scientific American). The takeaway message from this is that the supercomputer ‘K’, produced by Fujitsu, computes four times as fast and holds ten times as much data. It can also draw on the internet for additional banks of information, which is sitting on more than a quintillion bites. However, it needs 9.9 million watts to run, whereas the human brain needs just 20. Also, for reasons that aren’t entirely clear, transistors are faster on an individual basis, but neurons are much faster as a whole. So, as it stands, the computers aren’t quite up to scratch. Yet.

Deep learning, which is a component of machine learning (and effectively a rebranding of neural networks), has started to solve this. It is stupidly complicated, but I’ll try to simplify it. Imagine a simple algorithm, like a flow chart. It might contain things like, ‘is it red’, ‘is it round’, or ‘is it big’. Now imagine billions of them, that all describe the way you might be able to move through a big cube of sensory information to get an answer. Now, take all those billions of algorithms and put them on top of one another and also link them. What you have is a giant, 3D web of links between information. When you also work in statistics and algebraic models, you can strengthen and weaken links depending on what happened last time. Thus, you have a problem solving tool like the brain, a memory, and subsequently the ability to learn.

Nightmare, huh? Yeah, that’s why they pay the super nerds the big bucks… I urge you to have a look around if you want to try an understand more. There are various videos on YouTube.

Anyway, in 2012, Google’s AI learned to find cat videos, which it did with deep learning. This is amazing because they never told it what a cat was. It just, started to recognise them, because they appear so often in YouTube videos and are popular. But, think about it… Cats come in all sorts of colours, shapes, sizes, perspective, ad infinitum. It may seem simple to you and I, but it really isn’t. The fact that a computer picked up on recurring themes and began to identify a species is nothing short of mind-boggling.

All right, so what now?

Well, nobody really knows. For you and me, AI will start to become more prominent in everyday life, that’s for sure. The super computers can handle it now, but your home appliances will soon have better abilities making themselves more conducive for use in AI. In 2017, 10 billion transistors (neurons) will fit into a single chip. In fact, we’ve got so good at squeezing transistors in that quantum mechanics (tunnelling) is starting to become a problem. Also, as of this year, a new system for RAM (DDR4) will double the capabilities of most devices in homes. Basically, AI is getting pretty close to being a reality for everyone, at least to some extent. The dream of having a Siri that goes beyond simply being cool and becomes indistinguishable from magic isn’t as far away as you think.

So, should you be scared for your job? Maybe. The hypothesis of the technological singularity suggests that accelerating processes will cause a runaway effect and AI will exceed human intellect. Some people think this will happen in the next 25 years. Frankly, as long as we keep the buggers plugged in and can subsequently unplug them, I think we’ll be OK. Also, always remember that people buy from people, not machines… So brush up on those interpersonal skills, because machines will never have any need for money.

I am not going to waffle on about ‘what I think this means for marketing’. Frankly, beyond Google and co’s behind-the-scenes work, I don’t believe it is imperative for us right now. I suspect it will become a big part of what we do, but we don’t need to know about it. It’ll be a buzzword but, like ‘big data’, it means nothing to 99% of people. I do believe it will impact the following industries heavily and quickly, though:

BY ON 4 May 2015
Mark Razzell is strategic planner at Zuni.