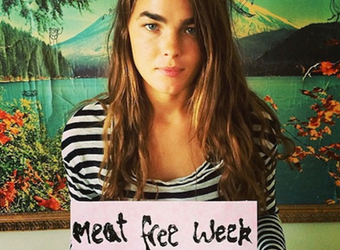 This Marketing case study details the public relations (PR) campaign behind Meat Free Week 2014, the second year of the not-for-profit event that encourages Australians to think about the amount of meat they eat, drive awareness and raise money for health research, environmental conservation and animal welfare.

Meat Free Week (24-30 March 2014) is a national week dedicated to raising awareness of the amount of meat Australians eat and the impact it has on human health, the environment and the welfare of animals.

Participants of Meat Free Week are sponsored to go without meat, including seafood, for seven days in order to raise funds for one of three leading charities: Bowel Cancer Australia (health), The Australian Conservation Foundation (environment) and Voiceless, the animal protection institute (animal welfare).

In 2012, Meat Free Week was awarded a $15,000 grant for the inaugural 2013 campaign through the Voiceless Grants Program. In its launch year, Meat Free Week had a core focus on excessive meat consumption and animals harmed by intensive factory farming. This was reflected by the tag line, ‘Help End Factory Farming’. Meat Free Week 2013 had a big impact, with wide-reaching national and regional press coverage, over 2000 people signing up for the challenge and almost $70,000 raised to assist Voiceless in their work.

In 2014, the message broadened to encompass the impact excessive meat consumption has on human health and the environment. In response to this, and to give the campaign a slightly softer, more approachable message, the tag line changed to: ‘Eat less, Care More, Feel Good’. 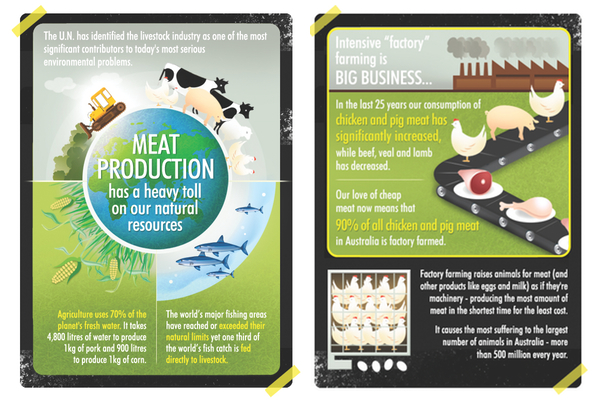 The primary target audience for Meat Free Week is socially aware women aged 18 to 34, with a secondary target of all people aged 25 to 54 who live in cities.

With a limited marketing budget of just $10,000, it was decided that PR would be the main driver of the campaign, with traditional and social media being primary channels to extend the message.

Ambassadors and chefs were a key component of the 2013 campaign and proved beneficial in leveraging PR. Recognising this, the number of ambassadors was increased in 2014 and two new supporter categories introduced: Experts and Community. Individual experts in human health, the environment and animal welfare ensured credibility across the messaging platform, while the community supporter base gave a voice to food bloggers and businesses who were aligned with the core messaging. All supporters provided their time to Meat Free Week at no charge, which was a huge win in terms of delivering a big impact within a small budget.

The strategy to broaden the message beyond animal welfare (factory farming) to health and environment saw charity partners extended to include Bowel Cancer Australia and the Australian Conservation Foundation. Widening the scope of charity partners assisted in generating more content, attracting more ambassadors to the campaign and targeting a wider group of media and influencers. It also gave participants a fundraising choice and opened up the campaign to those with an interest outside of just animal welfare.

The website strategy encompassed a layered approach to information. Info-graphics were introduced in 2014 to communicate top-line information in the core pillars of health, environment and animal welfare, with the ability to drill down to more specific/detailed content. All communication featured a strong call to action and drove consumers to the website. 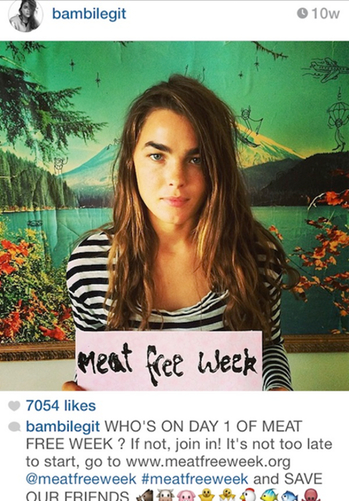 The four month campaign took place from December 2013 to March 2014.

The primary component, a traditional PR campaign, was used to generate mass coverage and discussions about the issues across local, regional and national newspapers as well as magazines, websites, blogs, radio and TV.

Having access to a diverse range of campaign supporters, from local participants to celebrity ambassadors, experts, chefs and charity partners proved invaluable in generating a wide span of coverage. A number of story angles were offered to media, from local families taking part to celebrity chef’s recipes, commentary from experts in a range of fields and interviews with well-respected scientists and charity heads.

Traditional media was also used to run a number of full page ‘charity filler’ ads in leading women’s, health and food titles. The creative communicated the core pillars of Meat Free Week, when the event was taking place and how to get involved. In addition, 500 posters were displayed in cafés, schools, universities and train stations nationally.

For social media, Facebook was used as the primary driver for its high frequency engagement with the use of clever creative, ensuring strong branding and increased sharing. Twitter was used to build and influence the conversation, while Instagram was used to target a younger influential audience and encourage the sharing of vegetarian meal images and ideas. They all generated highly topical discussions before, during and continue to after the campaign.

Blogs, particularly those in the food and wellbeing arena, played a very important role, with several well-respected bloggers brought on board as part of the new Meat Free Week Community. Utilising their already well-developed followers, they helped spread the campaign message and encourage sign ups. Many also created a number of delicious vegetarian recipes and blogged daily with Meat Free Week diaries and dishes.

Newsletters, in the form of an EDM, were sent regularly to the Meat Free Week subscriber base and were designed to communicate key issues and news.

As with the 2013 campaign, Meat Free Week created a lot of engaging conversation, and at times heated debate, around the topic of meat consumption and in particular, factory farming methods. In 2014 this ramped up when the campaign attracted the interest of LNP politicians who created their own counter-campaign ‘Free Meat Week’, which was held in parliament in response to Meat Free Week. While not planned, this activity increased press and social media conversation and also brought more Meat Free Week advocates into the public arena.

Coinciding with the counter-campaign was positive support for Meat Free Week by NSW Greens MP Dr John Kaye who, for the second year, filed a motion to the upper house. The motion congratulated participants, sponsors, organisers and charity partners involved with the campaign and noted a number of studies detailing the negative impact excessive meat consumption has on human health. 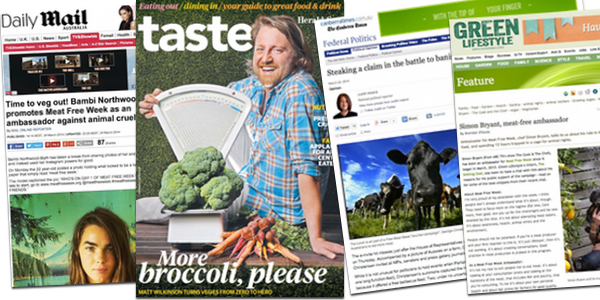 « Programmatic advertising and the future of media buyingThe Spirits of Australia part 3: brands big and small battle on the same front line »