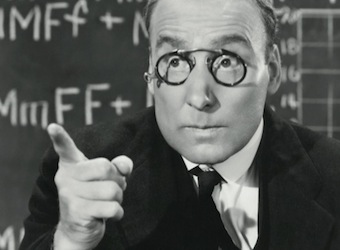 In 1997, I spoke at an internet show in Singapore. I expressed what was then regarded as extreme concepts about the future impact of the internet and the World Wide Web.

I proposed wild ideals at the conference that one day the use of an organisation’s web address would become as commonplace as their phone number and that someday a major brand would do nothing more than show their web address to create interest and intrigue.

It was a frustrating time for early adopters in trying to avoid the ‘lunatic’ label and trying to shake some sense into brands and agencies that the ‘digital age’ was upon us and we should embrace this new medium.

Accelerate ahead to 2012 and recently I had this horrible sense of déjà vu, but in a less inspiring atmosphere than in 1997. I was speaking to an audience of what appeared to be some of the industry’s finest eDM (electronic direct mail) facilitators and organisations engaged by brands to share their knowledge, experience and skills to deliver outsourced eDM projects. However, I was quite shocked by the lack of understanding as to the impact of the mobile on eDM strategies, plans and measurements.

There seemed to be this confusion or maybe even ignorance about how mobile has changed many aspects of our social behaviour. First, let me clarify that my discussion here is focused on B2C – consumer oriented brand engagement.

I have consistently said over the last four or so years that people should be very wary of statistics and should look carefully at the region they are focusing on and the sample space they use to derive measurements or opinions. Mobile is very different across many regions and so basing a campaign entirely on overseas statistics or because the head office used it in Asia is a recipe for disappointment.

The best and most high profile and actively debated example is that of the Android versus Apple battle. Android is now a more dominant platform than Apple. Depending on which stats you look at, be they either new sales or devices currently in use, the numbers are pretty even, but certainly have Android out front.

Back to the stats – Android is now the dominant handset being used and sold in the market. Unless you’re an application developer, then who really cares? But to make a point about how misleading stats can be, you need to look at the ‘connected audience’.

I saw some recent numbers from a telco and have done some research with a number of my customers in retail, news and information aggregation, and even in general information portals, and they all tend to reflect the same results: the iPhone dominates for mobile access. In fact, one customer’s data showed that over 87% were iPhones or iPads being used to surf their website. Another show upwards of 90% and another down around 71%. This is definitely unusually high, but more a reflection of the age segment of sub-25.

What is speculated with these kinds of usage discrepancies between what’s in the market and what’s being logged by websites is that over 95% of all iPhone users regularly surf the web and use their phone for their email and social media interactions. However, with Android phones there are a significant number of people who never connect data, never surf or use the phone for anything except calls. Therefore, iPhone activity and ‘connected’ usage will appear to dominate.

Among my eager breakfast audience of ‘modern world marketers’, the lack of understanding about these kinds of stats was concerning.

Email engagement seems to be the slowest segment to morph its behaviour around the changing market and to adapt and benefit from the incredible analytics that can be attained. Maybe it’s a reflection on the legacy systems we use to design, create and generate the messages or the lack of integration with web landing pages. Understand the power and control that is now at your fingertips and the direct one-on-one consumer relationship that can now be nurtured is like never before.

Today, it is speculated that over 90% of all personal emails are read on mobile phones. Our consumption of personal email has changed time periods and the types of interactions that ‘connect’ with a consumer are vastly different.

It is also speculated that by 2014 over 30% of all consumers will have a mobile and possibly a tablet (most likely an iPad) as their primary internet access device, with their desktop PC being solely for entertainment like gaming or for serious ‘work’ like proposals, resumés and spreadsheets.

The days of surfing the web and interacting through social media channels via a desktop PC at work and at home are declining and this changing model needs to filter upwards to change the way brands try and engage.

Exploring the most important fact that private or personal emails are now the principal domain of a mobile and the downstream effect is significant… or at least should be.

It is incredible that the majority of email I receive is designed to be read on a desktop, rich in images and using fixed width constructs such that trying to read them on my phone is a challenge. Unless the offer or invitation is truly of personal benefit I simply hit delete.

Interestingly, about a third of my email subscriptions or lists are from the US. I have five retailers I’ve ‘joined’ and nine informational sites for industry updates or events. Many of these are now reverting to simple text-based email again and they have varied the time of day I receive them.

One of my customers started adopting simple plain text ‘no noise’ emails and increased the click-through rate to landing pages by over 30%. From the landing page, he was able to gather data like phone make and model being used. Tie in the occasional SMS or MMS and you can collect information on what telco they connect with – then turn on location logging on your landing page and you can map where people are connecting to you from. If they are loyalty customers, you can then start to see who reads emails from home, maybe in transit or from work. Not only can you start to build some valuable insights about your customers, but you can also adapt and vary your eDM on a per customer basis and have this advanced model of ideal communications being refined and tightened per customer to leverage every interaction for the best possible outcomes.

As a consumer am I worried about all this profiling and tracking? No. I have consciously joined a loyalty program or registered for a mailing list and have asked for this information. I want it sent at the best time for me to read in a format I can easily scan and understand. I want what is best for me!

Back to my breakfast and, astonishingly, only three people in the entire audience had adjusted eDM thinking around simple things like the times of sending based on consumers being in transit or at lunch and using their phone and not work PC. Only three people had tried to analyse devices and reading habits, and then applied the basic insights to future initiatives – adjust, measure, track and then adjust again.

Only five people had begun reducing the highly graphical nature of emails and one had reverted back to basic text citing some good preliminary results.

The mobile is not just an extension to ‘a digital strategy’ – it is a medium all on its own, distinct from the desktop environment.

The usage patterns and the technical differences are so vast that having a digital strategy that isn’t split into two very different streams to enable maximum leverage from mobile is simply ‘old school’ and doomed. Using an integrated series of campaign formats that leverage all aspects of mobile can build a wealth of customer intelligence and then be applied to engage in a very powerful and neverbefore-capable one-to-one fashion.

BY ON 1 October 2012
Joe Barber is a 25 year veteran of technology companies with the last five years focussed on mobile and retail. He is currently CEO and founder of Edge80.com with other notable start-ups under his belt being Third Screen Media, Sniip and Planet Internet. Joe has lived and worked in the US, Malaysia and parts of Europe and talks at numerous trade events worldwide.