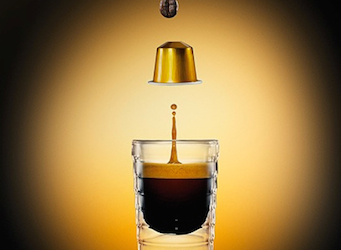 Nicole Parker speaks with Marketing about the brand’s unique business model, its customer research projects (including finding out there’s 1001 ways to prepare a Nespresso coffee), its latest campaigns and its global content marketing efforts.

From the brand’s birth in Nestle’s mountaintop headquarters Switzerland 28 years ago, Nespresso has eschewed third-party distribution for its direct, ‘club member’ model.

It doesn’t sell via third-party retailers, favouring its own boutique stores, ecommerce and a 24/7 telephony service.

It entered the Australian market in 1997, but it wasn’t until 2008 that consumer uptake of pod coffee started taking off.

Data released in March 2014 by Euromonitor pegged Australia’s 2008 levels of coffee consumption via pod machines at 11.1% of fresh-ground coffee, or around 144 tonnes. By 2013, that figure surpassed 50% of the fresh-ground coffee category, a ten-fold increase in tonnage.

Buy 2018, Euromonitor projects 3833.8 tonnes will be consumed, amounting to a spend on pod coffee of $248.3 million, with pods claiming a 65% share of fresh-ground coffee.

Nicole Parker, marketing manager for Australia and Oceania at Nestlé Nespresso SA, speaks with Marketing about the brand’s unique business model, its customer research projects (including finding out there’s 1001 ways to prepare a Nespresso coffee), its latest campaigns and ongoing content marketing efforts.

This interview follows a visit to Australia by Nespresso’s global CEO. Parker says it was a good chance to share Australians’ passion for coffee, which in Europe is still a bit misunderstood.

M: How has the Australian market played out for Nespresso?

NP: We’ve been a very successful market for Nespresso globally. Our traditional roots were in Europe and becaseu of pop size and because of historical affinity to drinking espresso based coffees, markets in Europe are still a very large part of our business, but increasingly the world outside of Europe is becoming the focus for our brand and certainly within the region we operate in, Oceania, and to a larger extent the greater Asia-Pacific region, we are certainly a progressive market within that group of countries.

M: Asia must be seen as a big opportunity for the brand?

NP: It is. There are emerging coffee cultures in a number of Asian markets as well. Where it’s been a little easier for us in Australia and New Zealand is because our population has become accustomed over the last 60 years to drinking espresso based coffee beverages, so we saw the post-WWII migration of a lot of people from southern Europe who brought coffee culture to Australia and that’s really taken off.

I’d say in the last 30 to 40 years, especially where coffee took over and became the predominant hot beverage over tea, which was transitionally drunk until that time period.

M: Interesting you say our existing coffee culture has made it easier for Nespresso. I was going to ask whether it’s made it harder given pod machines are different to which people are accustomed?

NP: Certainly when we came to market… We always talk about providing a high-quality experience in the home, because we know that in Australia we have a really good quality espresso coffee product out of home. So we weren’t aiming for that audience specifically, and there are a lot of reasons people like to go to a cafe beyond the functional of just going to get a coffee – it’s a social experience for many of us. We knew that wasn’t where we’d play a role as a product, but where we have been able to create a point of difference is to say you can replicate that espresso quality coffee in home, and what Nespresso is able to provide is consistency time and time again, because the machine and the capsule take a lot of the guesswork out of making a coffee. You go to a cafe and the barista’s trained, they know how to grind the coffee, they know how to tamp it, they know what temperature of the water going through the machine – they’re able to control those variables because of their experience and training. At home it’s difficult to be able to recreate that experience with all those variables and control.

We pioneered the category 28 years ago by being able to provide a very high-quality product in a very convenient way for people to consume regularly at home.

M: Nespresso’s direct-to-customer business model is pretty unique – what benefits does that have for the customer relationship?

NP: We refer to consumers who purchase Nespresso coffee as ‘Club Members’ because we have a direct, end-to-end relationship with us.

What that allows us to do is to build relationships with club members. We learn their coffee consumption habits, we learn how frequently they consume coffee, which of our coffee they prefer to others. That then allows us from a marketing point of view to target more in line with their behaviours.

M: ‘The Art of Coffee and Milk’ is your latest campaign – how’s it going?

NP: What that’s designed to do is hero Nespresso’s milk credentials.

Part of this campaign was actually initiated by a questionnaire we sent to our club members. We received a lot of fascinating feedback from them. What that questionnaire was designed to do was to really probe how our consumers drink coffee at home.

We counted a thousand and one different preparation methods for coffee alone, which is mind boggling.

NP: Yeah, but when you think about it we have 22 Grand Crus – the name of our coffee blends – and we know that Australians drink full-cream milk, skim milk, soy milk, rice milk… When you add in all the options of milk, sugar, syrups, any other sweeteners, hot and cold beverages, you start to see the mind starts to explode with the number of variables possible. But you know, you can kind of see anecdotally if you go into a cafe. No one person is ordering their coffee exactly the same as the next five people in the queue. It’s a very individual experience.

So the campaign started off with that survey, [then] in August we launched our above-the-line campaign. A four week TV campaign nationally on the free-to-air and subscription networks. We had a variety of lifestyle print magazines within the schedule as well, we have a national out of home campaign, and obviously we have a digital campaign as well, which includes banners and a competition via our social media platforms where we’re asking our club members to create their favourite Nespresso coffee and then share that via the hashtag #nespressocreations.

NP: There are two facets to it. Certainly the questionnaire and the social media campaign is arguable targeted more towards our existing members, so you could call that a retention campaign, or a ‘stimulation’ campaign.

The above-the-line activity is probably more to do with acquisition, because within the campaign, using TV as an example, we’ve run a top-and-tail strategy, so we’ve had the 30-second hero TVC, which is the brand camping featuring George Clooney, and then we follow that up at the end of the ad break with a 15-second product tail, which in this instance is very much focused on the machines and how the machines can help you make all of these different coffees.

What is new is the 15-second product-based trailer. And we’ve been able to customise that in line with Australian coffee consumption habits. One of the things we’ve been able to do as part of the global campaign is look at ways in which we can localise the messages to make it more relevant to our prospective consumers in Australia.

M: What role does the print part of the media plan play for Nespresso?

NP: I think there are three facets around why print is still relevant for us as a brand and the first is our brand positioning. We’re a premium lifestyle brand and magazines target consumers in a suitable environment, and with complementary products outside of our category that also are part of that environment.

The second one is that we have had now long-standing relationships with boutique titles and that allows our investment to live beyond the advertising page. We’ve been able to work with some titles around developing some editorial opportunities.

And the third one would be that as the print media brands extend into other platforms and affiliations that we’re then able to take our brand into the more relevant spaces. An example of that is with Australian Gourmet Traveller, we are the premier sponsor of the Gourmet Traveller Hotel Awards annually. It’s a property that we developed in conjunction with Gourmet Traveller seven years ago, and continued that investment with the title over the last seven years, and what that means is that it also gives us the relationship not just with the magazine but with the readers of that magazine through the various extensions that sponsorship brings, whether it’s an event, or whether it’s a clip-on booklet readers can keep, or to download that via the app. But also the event itself allows us to reach organisations such as hotels and conferencing venues that are a value to us for the other side of our business, the B2B or our professional machines and coffee range.

M: Does producing your own content play a big part of Nespresso’s marketing strategy?

We hosted an event for our club members in our flagship boutique in Pitt Street in Sydney, Donna was there as a co-host, and we had Tetsuya Wakuda, as one of our two chef ambassadors, who made his well-known ocean trout for our guests as well.

It’s a great way for us to bring the brand to life for our club members. Through each of the issues, you also get to travel to another city that has Nespresso in it, but also explores aspects of that city from a cultural point of view, that you may not have had access to before.

It’s very well appreciated by our members. This year we’ve been able to launch it as a digital version for iPad and Android devices, so that allows us to get the magazine into the hands of more people now as well.