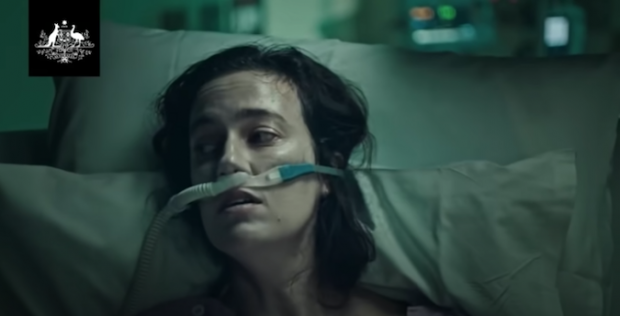 With two new vaccine ads recently released by the Federal Government, healthcare marketing has never been more hotly debated. Simon Davies reviews both campaigns and considers if they are effective.

A young woman struggles to breathe. She lies in a hospital bed, attached to a nasal cannula. Her eyes dart around, panicked. Her distressed breathing is highly audible over the beeping of machines.

Welcome to the Federal Government’s new COVID-19 ad, which rolled out last week as Sydney cases rose and its lockdown continued and Melbourne entered snap lockdown. Designed to cultivate fear of the virus, the ad imparts a three-step call-to-action: Stay home. Get tested. Book your vaccination.

But is it effective?

On the plus side, it certainly captures the viewer’s attention and incites a need to take action. For better or worse – whether or not they agree with the message or the means – people are talking about it. The choice of a young woman as the focus is also effective in making people realise this isn’t just an issue for older people but an issue for anyone of any age.

Fear in marketing works, but it needs to be used carefully. Some people may find this ad too graphic or distressing and turn-off, but actually, it’s trying to reach those people who haven’t been taking the virus seriously until now. Regarding this segment of viewers in particular, I believe it works.

Essentially, this ad creates a sense that you do not want this to happen to you or your family and friends. It’s also helpful that the call-to-action points are straightforward, which turns the fear into actions that are easy enough to take: stay at home, get tested and get vaccinated. I think it will compel behaviour change and reduce some of the complacency around COVID-19.

The biggest drawback is actually outside the ad. The administration of the vaccine is unclear, particularly for people under 40, so if the ad motivates young people to book a vaccination it might turn out to be harder than presented.

The second ad that debuted over the weekend has a very different feel. Set against a colourful backdrop in a pastel palette, ‘Arm Yourself’ features a number of people lifting their sleeves to show a band-aid, indicating that they have been vaccinated. A woman’s voice, over a forgettable tune, tells the viewer that vaccination is the best defence against the virus and ‘our only way forward’.

In its favour is the diversity of the cast with arms from people of different ethnicities, genders, sizes and ages featured, but that’s about all that’s interesting. Unfortunately, the ad is simply too boring with no cut-through to be effective. The message is clear on what to do, it just isn’t compelling enough to make anyone want to do it.

Personally, I do like the use of the motto ‘Arm Yourself’. It is quite strong and simple. With better execution, it could work well to encourage vaccination. I would suggest more personality – we see arms but we don’t see faces, which people relate to more strongly. To make it more compelling, I would add human emotion into the mix, whether that’s the owner of the arm being relieved that they’re protected or excited to be able to continue with their lives.

As it stands, this ad does not compel me to want to take action because the narrative stops at the band-aid and doesn’t show the positive consequences of being vaccinated. Frankly, it doesn’t answer the ‘why’ of the call-to-action. Demonstrating benefits provides a better incentive than social proof alone.

The two ads are tonally different for two different audiences. The medical ad is fear-based because it’s trying to reach the most complacent population, shocking them into realising the real effects of the pandemic and I think it lands that segment. ‘Arm Yourself’, however, is designed to rally people to a cause and it’s not quite there. I believe the story of vaccination is yet to be told well because it’s not just drama that propels us to action. Sometimes we also need to know that we can look forward to a happy ending.

Simon Davies is the CEO and founder of Bastion Brands.