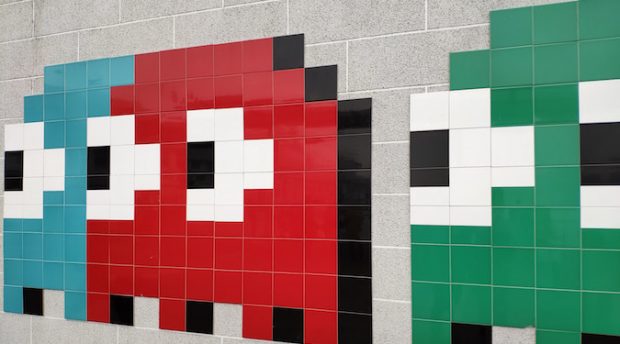 Using mobile games as an example, Brian Bowman explores consumer motivation, the idea of ‘horizontal segmentation’ and how a better understanding of clusters and profiles can help optimise Facebook advertising.

It’s an idea that remade the food industry a few decades ago and has remade several other industries since. We believe it’s about to remake user acquisition and Facebook ads, too.

The first champion of horizontal segmentation in consumer marketing was a guy named Howard Moskowitz. Moskowitz, a food researcher and psychophysicist, had been asked to find the perfect sweetness level for a new type of Pepsi. But after he dug into the problem, Moskowitz discovered there was no perfect level of sweetness for the new
type of Pepsi. There were only perfect levels of sweetness. Or, as Malcolm Gladwell explains this in his TEDTalk on the subject, there was no perfect Pepsi – there were only perfect Pepsis.

Pepsi, unfortunately, wasn’t sold on this concept. Moskowitz had to keep pitching it far and wide, with tepid reception, until a pickle company gave his idea a spin. And Moskowitz, true to form, found them not the perfect pickle, but their perfect pickles – ‘zesty’, ‘classic’, etc.

Most famously, Howard returned with a recommendation to make chunky pasta sauce. No other company had been selling chunky sauce, and pasta sauce makers weren’t aware that people even wanted chunky sauce. But because Prego trusted Howard and the research that pointed to this unmet need, Prego launched a line of chunky pasta sauce. And went on to sell $600 million of it over the next few years.

So, what does all this sauce talk have to do with user acquisition? Everything, actually. Because in essence, Moskowitz had unearthed the following ideas:

a) People are not all the same.
b) While people are not all the same, if you study them in large groups you will find they tend to cluster around a certain set of profiles or preferences. Personas, if you will.
c) With enough data and data analysis, these preference clusters can be found.
d) If you develop products expressly tailored for each of these preference clusters, you can sell more stuff. A lot more stuff.

Gladwell explains in his TEDTalk that, for example, if his audience was to get together and make one perfect brew of coffee together, they would individually give that brew a collective average score of about a 60 on a scale of zero to 100. But if the group was allowed to break up into coffee clusters based on certain dominant preferences and was able to make coffee expressly designed for each of those preferences, the satisfaction score for those preference-driven brews would rise to about 75 to 78.

So, to paraphrase what Moskowitz and Gladwell have explained and to bring it into the context of Facebook and Google user acquisition:

This is clearly an evolution – if not a revolution – in how most UA and design teams have been doing creative for user acquisition. We’ve all been doing reasonably well by focusing on creative testing, but we’ve been largely focused on the creative elements of those ads that have the largest appeal (though good competitive analysis does take emotional hooks and the tone of ads into account).

What if we could talk to people based on what motivates them to play the game? What if we could take a video ad – the exact same video – and then adjust the copy or the call to action based on what motivates different users to want to play? By tailoring messages according to what those player profiles will most respond to, could we increase ROAS by  20% or 30%? Or could we expand the game into a whole new audience segment?

If you know your way around game theory, you’ll know we already have quite a few detailed studies about different gaming profiles and user personas. So, we actually have quite a lot of information about what motivates people to play games.

You can look to Fogg’s ‘Behaviour Model,’ or Scott Rigby’s ‘Player Experience of Need Satisfaction’ (PENS) model. Or you can view your users through something simpler, like ‘the Big Five,’ or the ‘Five Factor Model.’ Paula Neves breaks that model out well in her article Looking at Player Motivation Models:

“The five traits, under the acronym OCEAN, are therefore treated on a spectrum where you can be open or closed to experience, conscientious or unconscientious and so on,” explains Neves.

Bartle’s ‘Player Types’, in particular, may be the model that the gaming industry embraces the most:

In fact, given the names of the player types and their descriptions in Bartle’s model, it almost seems like some of these player types have already filtered down into ad creative.

Or maybe behaviour models aren’t quite your thing. Maybe you want to view things more through the lens of which types of emotional hooks appeal to different player types.

As a UA manager or designer (or even a game designer, but that’s another article), you can start seeing your user base through any of these different models. And you can start customising your advertising accordingly.

Cutting-edge UA and design teams are already exploring these different models and applying them to their user base. When we polled our clients, we learned that about 10% of them have these sort of persona profiles in place. Typically, these models are being generated in marketing departments through the use of user surveys.

So, here’s what an actual player profile might look like. This is actually fake data, but it gives you an idea of what information gets included and how detailed these profiles tend to be. 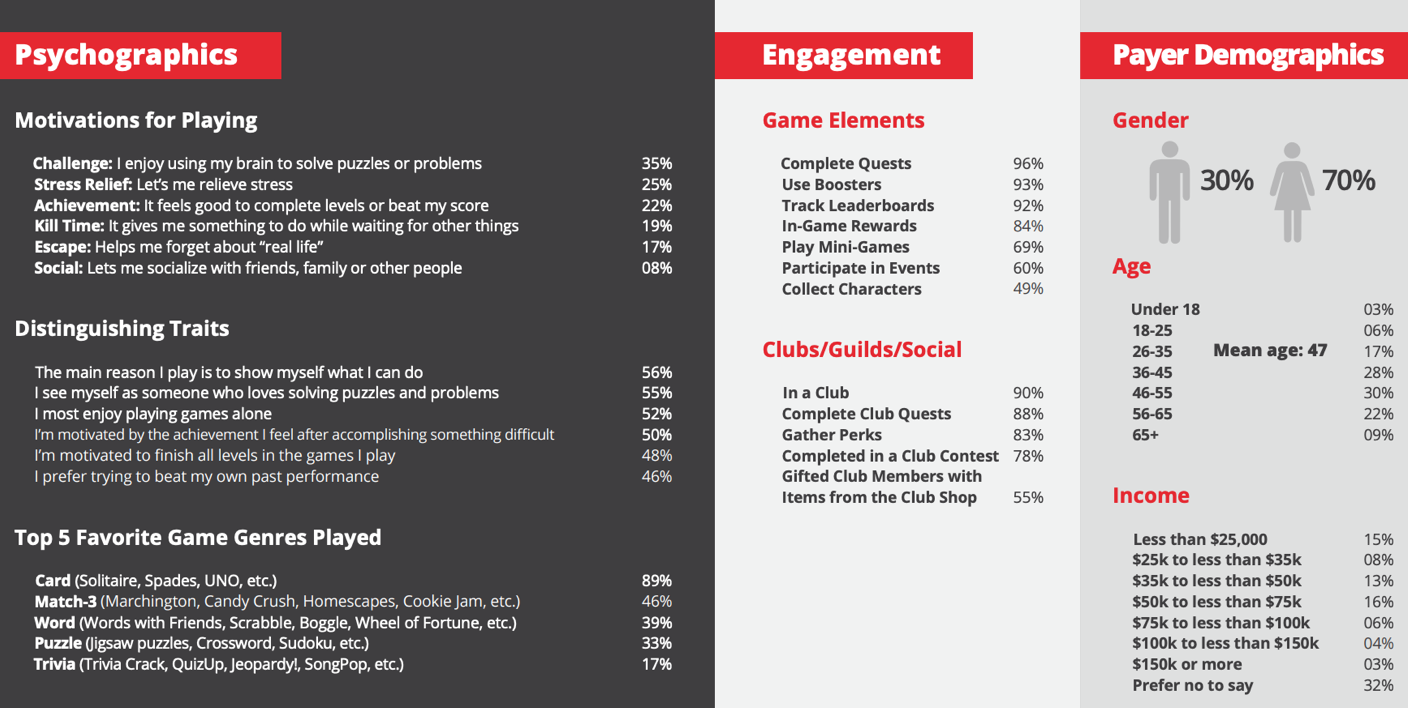 Note how the graphic shows what this particular player profile most cares about in the game. The Demographic info is included, but what will really shape our creative is in the left column. Demographics might help a little, but user motivations are the driver.

So, we can take the motivations from these different player clusters and look at what’s unique about them. We can also see which other titles they’re playing. This helps us come up with new creative ideas and a new list of competitors, which in turn lets us do better competitive analyses.

Armed with this information, almost any designer would immediately understand that they need to create different ads for these different player segments. These are different audiences.Even if the ads are ultimately meant to sell the same game to all the different profiles, ads tailored to each profile are going to perform dramatically better than one ad designed to try to please them all.

Even being able to swap out different bullet points for each player persona could result in tremendous improvements to ROAS.

There are also media buying implications to a player profile methodology. Each of the player profiles above, for example, tends to favour somewhat different websites, apps, and even YouTube channels. So if a user acquisition manager wanted to squeeze every possible drop of ROAS from an audience, they would segment that audience based on different player profiles.

But that’s where the art of UA management intersects with the science of the ad tools we have now; it’s up to each UA manager to find the sweet spot between audience targeting and audience automation.

It will take some experimentation to figure out whether it’s appropriate to segment audiences for player profiles, or if it’s better to just make different ads for the different personas and to let the algorithm figure out optimal performance.

People can’t always tell you what they really want

Before you try to apply all this by launching a user survey or research study, know this: people may not be able to tell you what they really want. Because they don’t know. Sometimes, you don’t know what you really want until you happen to stumble upon it.

For example, Moskowitz, the pasta sauce researcher, discovered that many people wanted chunky pasta sauce, not the perfectly smooth pasta sauce that was only available at the time. Only with some unusually clever research was Moskowitz able to unearth this desire.

All this, of course, turns standard product research on its head. It means all those surveys and focus groups and other tactics we’ve been using to figure out what people want from our games are not the full story. But this is exactly the principle that put Apple on the map. Steve Jobs didn’t go find out what people wanted from a better cassette player. He built them something beyond their imagination: The iPod.

Henry Ford is often quoted with a similar sentiment: “If I had asked them what they wanted; they would have said faster horses.”

So, what we may be aiming for here is a quantum leap, not an iteration. Whoever can figure it out, systematise it, and apply it to game design and creative strategy could well become a billionaire. Or another Howard Moskowitz.

For the past two years, we’ve watched Facebook and Google move towards fully automating UA advertising. And because the algorithms of those two ad platforms have been getting better and easier to use all the time, much of the qualitative side of UA management is now best done by machines.

But now, with player profile theory, there’s a whole new dimension to creative. It takes everything to another level.

Once we can see into what’s motivating people to play games, we’ve discovered a whole new level of creative theory. It makes getting overly focused on button colours look downright shallow.

All the creative elements we’ve been focused on up until now (colours, sounds, even ad copy) need to be realigned to serve these customer motivations.

With player profiles theory and player motivations, we have crossed into creative strategy 2.0.

Photo by Kirill Sharkovski on Unsplash