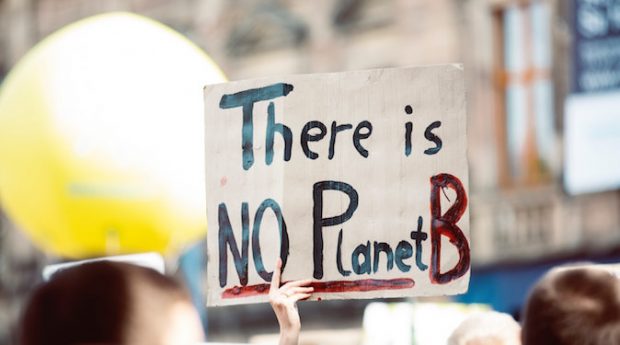 In the midst of the climate crisis, Daye Moffitt believes that creativity and multilayered thinking from corporations could be the solution.

Having only ever worked within the field of creativity, I’m obsessed with the discipline. I’ll admit, claiming creativity will save the planet is a bold statement, but I truly believe it can and will.

In 1963, an individual addressed an audience of 250,000 people demanding two of humanity’s most fundamental rights – fairness and equality.

Martin Luther King, Jr had a dream. And the persistent and creative delivery of his dream changed the world.

Today, we face a new challenge.

The world, as it turns out, is dying. Our oceans are warming, ecosystems have been destroyed, and climate change is decimating animal populations. We’re staring down the barrel of mass extinction – and the worst part is, collectively, we’re not trying hard enough to stop it.

See, we’re all aware of the issues, but no one is really sure how to, or who will fix them. For now, some corporations are offering the market more eco-friendly, consumable options. Stainless steel straws via Amazon. Recyclable plastic bottles from Coca-Cola. Carbon neutral products, offers and experiences, like Ikea’s urban village and sustainable living project, or near-future autonomous, sustainable ride-sharing platform concepts like Joyn.

However, when Sydney’s air quality matches that of Mumbai’s, as it recently did, we have to ask ourselves: Should corporations be working harder to clean up a world they helped contaminate? The world now consumes 2.5 million times the amount of resources it requires, so we need bigger, harder working ideas and systemic change from big and powerful corporations – and fast.

It’s not like it’s not possible. Look at the UK’s The Growroom which is busily reimagining the future of agriculture by creating food-producing architecture. Or Lego which is producing campaigns in collaboration with Mark Ronson and British designer and inventor Dominic Wilcox to do only one small thing – ‘rebuild the world’.

Here’s the problem: The health and vibrancy of our planet is at risk. With most governments preoccupied with winning elections, we’re relying on the only force big and powerful enough to cultivate and disseminate meaningful change – the big corporates.

If only the problem stopped there.

Shifting business practices, products and services into more sustainable and regenerative product formats comes at high operational and structural costs. Quite simply, if big business can’t make big money by saving the world, it’s unlikely to be their top priority.

So, what we have on our hands is a major, multilayered problem that requires major, multilayered thinking power to resolve. The only thing left to turn to is humanity’s own renewable resource. The original problem solver. Creativity. It’s a fact – creativity solves problems and leaves situations better than they’re found. And Houston, we have a problem!

Let’s pause for a moment to understand creativity properly. It’s a mode of thinking reserved for a minority of minds ruled by messy, non-linear (and often nonsensical) cognitive mental processes. It’s beyond the individual’s control, an innate and sometimes unwelcome talent. Many people identify as creative, but only a few truly are. Genuine creative minds break through the limitations of perceived possibility and exist in a world where there are no boundaries. To explore uncharted terrain freely, and in doing so, solve big, small, old and new challenges with original ideas.

It will come as no surprise that I hold creativity in the highest esteem. As the world grows increasingly automated, creative thinking becomes increasingly valuable. Corporations turn to their creative agencies to solve challenges they need fast, reliable and trailblazing answers to. With this in mind, we have to ask ourselves, and more importantly, our clients, why aren’t they calling upon us to help them solve their biggest problem yet, how can they survive if the world doesn’t?

I like to simplify tasks because it makes them easier to resolve and frankly, helps me sleep better at night. So, I’ve distilled the task for clients (or anyone employed by a big or formidable corporation) into three bite-sized, easily executable steps:

Seek outside help and opinion

Find a business partner who can help you solve the world’s problems. Whether that’s your current agency partner or someone else, the world is full of brilliant, wildly eager, creative minds – so use them. Chances are, someone who is smart enough to have solved previous business problems with bold and inspired fresh thinking, is also capable of solving the world’s problems too. All you have to do is give them a chance.

Action: Make it your agency’s problem. They’ll thank you for it.

Don’t be a coward

This is not a drill. The world is counting on you. Believe me, this is not the time to play it safe. Agencies have a habit of pushing clients out of their comfort zone. And frankly, they’re not doing their job if they don’t. Don’t shy away from big, never-seen-before ideas when given to you. A truly new idea should make you feel uncomfortable but inspired. You’ll know it when you see it.

Action: Radical thinking is the mandate. Don’t forget that.

I’m not going to pretend it’s easy to push ideas through big and often bureaucratic corporations. I’ve seen more great ideas killed by risk-averse and conservative executives than anyone cares to know. Ideas that can change the world die a quick death if their custodians don’t confidently stand behind them. No matter what, back the idea.

Action: Be tenacious. After all, this idea could save the world.

If one man with a trailblazing vision could change the world, imagine what huge corporations full of millions of creative individuals could do?

Daye Moffitt is an executive strategy director at Landor Australia.