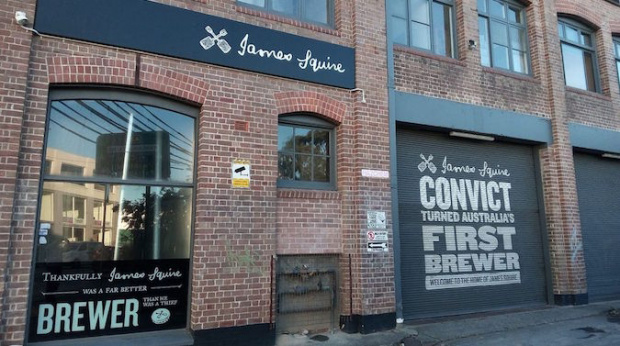 The incredible James Squire story has become synonymous with selling beer. Adam Joseph uncovers a history of the man that we hear less about – his relationship with Aboriginal people, including the renowned Woollarawarre Bennelong.

I love and hate the James Squire™ beer brand in equal measure. And it’s not uncommon to hear descendants of James Squire himself say the same.

Were it not for the initiative and persistence of Chuck Hahn, who built the contemporary beer brand based loosely on the life of the real life character of Squire, few would know the name. Squire’s was a life well lived and he deserves remembrance.

Yet, with the James Squire trademark comes a moral duty to the man,  to celebrate his extraordinary gifts of benevolence; how he extended opportunity, care, dignity and hope to Aboriginal people. The example he set is something that Lion, manufacturer of the contemporary beer brand, refuses to discuss.

TV commercials produced by Lion take an Australian heritage commemoration approach to selling beer. They lionise an individual who copped a beating from the system, but who then forged a new path to success and riches.

It’s a theme is somewhere between the Victoria Bitter commercials narrated by John Mellion (“a hard earned thirst needs a big cold beer”) and the Swan Lager advertisements by MoJo in the mid-1980s celebrating those who’d “made it through” adversity.

James Squire™ commercials, sometimes openly, are littered with spurious facts and outright falsehoods. Which are peddled to capitalise on the affinity Australians feel for their convict forebears, the underdog, and with pioneers who ‘had a go’.

Big budget TV and print advertising campaigns have refamiliarised Australians with the name. Consumer disposition is also actively extended through bricks and mortar hospitality venues built around the Squire legend.

The ‘Malt Shovel Brewery’, on Parramatta Road, Camperdown, brews an ever growing volume of beer, which is consumed at places like ‘Squire’s Landing’ (ground floor at the Overseas Passenger Terminal at the western edge of Circular Quay, facing the Sydney Opera House), and ‘Taphouse at The Rocks’, which is a short uphill stroll on Harrington Street.

It’s no coincidence the new Taphouse at The Rocks occupies a heritage-listed building, under which are foundations built by convict labour that are visible through a glass floor.

A visual cue, obviously, to reinforce the ‘story’ that Squire was transported to Botany Bay for stealing beer brewing ingredients. That marketing narrative tells us he received a reduced sentence and ‘only’ 150 lashes because he bribed a judge with a barrel of beer.

The real life James Squire was caught stealing five hens and four roosters and was duly convicted and transported. While in Sydney, he worked in the surgery of John White and William Balmain, where he pilfered medicine to help a sick friend. He was caught in the act, again, and sentenced to 350 lashes.

It was punishment he took in instalments, since humans generally don’t survive more than 150 lashes inflicted at a time.

The financial resources of Lion can guarantee its survival in the restaurant trade where the previous occupier of the building – the Belgian Bier Café – failed. The bricks and mortar motivations of Lion, however, in serving food at Taphouse at The Rocks, is not to build a name for itself in the restaurant trade. Rather, it is to cement an association between the real James Squire and the alcohol manufacturing trademark that leverages his legacy.

Most pedestrians passing the frontage of Taphouse at The Rocks fail to see a tiny cement sculpture on the footpath outside. It looks like any other crumpled and discarded package littered thereabouts. It’s unusual for an installation artwork, only the size of a cigarette box. Its sculptor intended for it to be overlooked by the masses. Poignantly, it bears the word ‘epitaph’.

Across town, the mortal remains of the real James Squire are interred at the early settler cemetery at Matraville. His tombstone mentions his success as a brewer, but just in passing.

The grave marker bears a quotation by Joseph Lycett, the convicted forger whose paintings are a remarkable record of Aboriginal people and Indigenous life during the British colony’s early history. The headstone epitaph highlights that Squire was far more than a beer brewer. He died a wealthy man, who would have died far wealthier were he not so generous with others.

In September 2016, campaigners for the preservation of the grave site of Bennelong met with Charlotte Churchill of Lion’s corporate affairs unit, seeking the company’s potential support. The outcome of that meeting underscores why multinational FMCG food businesses should not be entrusted with profound responsibilities to Australian history, or to our understanding of the national character.

Bennelong, his wife Boorong, and his protege Nanbarry were all buried, together, by James Squire in his orange orchard at Kissing Point in the early 1800s. The site has been transformed by the passage of time, and encroachment of suburbia (just as that same Wallumedegal land was transformed by agriculture in colonial times, when Francis Bathurst Suttor and James Squire managed adjoining farms there).

Today, the site is the front yard of a residential dwelling at 25 Watson Street in Putney. It was put up for sale in December 2017 and was ‘passed in’ at auction on the 25th anniversary of Paul Keating’s Redfern Address[1]. A date 250 years to the day since Bennelong departed for London with Arthur Phillip, becoming our continent’s first foreign envoy.

Campaigners for the grave’s purchase and preservation approached Lion Co assuming its ownership of the James Squire and Malt Shovel trademarks signalled the company’s desire to honour the character who brewed beer at his Malting Shovel brewery and farm on the banks of the Parramatta river.

After an initial, cordial meeting, Lion Co ceased all further communication. Perhaps the company judged it was inherently risky to be involved in the project, given the damage alcohol inflicted on Bennelong and its contribution to domestic violence and the breakdown of his marriage with Barangaroo.

It’s a familiar narrative. As Keating said at Redfern on 10 December 1992; “Just a mile or two from the place where the first European settlers landed, in too many ways it tells us that their failure to bring much more than devastation and demoralisation to Aboriginal Australia continues to be our failure.”

The truth is more complex, but worth the discussion. When Squire had served his full convict sentence, he was given a 30-acre land grant at Kissing Point, land that had been vacated by the Wallumedegal who either succumbed to, or ran from, the ravages of smallpox.

At a time when many settlers were trying to rid ‘their’ lands of Aboriginal people, Squire invited Bennelong to come on to his farm, and to bring as many others as he wanted. Thus, the 100 strong ‘Kissing Point Tribe’ was established.

During Australia’s bicentenary year, the same year that Hahn created the James Squire brand, historians set themselves the challenge of solving a persistent mystery. Squire was said to have had a ‘military bearing’ and understood combat tactics, yet his name could not be found in the British army or navy service records. The mystery was finally solved in December 2016 and published by the Fellowship of First Fleeters (Vic)[2].

Squire was a founding member of George Washington’s revolutionary army. He had previously been convicted in England and transported to North America. There, he opted to serve a term in the military instead of being subjected to hard labour as a convict. He was likely involved in the siege of Boston, and ultimately was the commandant of a prison that included North American Indians dispossessed of their lands.

That experience, and his own reported Gypsy cultural background, makes his sympathetic attitude towards Aboriginal people completely logical. In no small measure, it was mutually felt. Bennelong’s second wife Barangaroo was so disgusted with the practice of flogging convicts that she once placed herself between a convict and a soldier who was flogging him.

Many of the first fleet convicts were Irish political prisoners. The others were petty thieves, whose actions were not seen as crimes by Aboriginal society, which was based on sharing resources.

The tens of thousands of years spent by Aboriginal people sharing food on the eastern side of Circular Quay produced the largest shell middens found by the British when they arrived in January 1788. Those shell middens were used by colonisers to create lime mortar that binds together white sandstone buildings erected by the British around Sydney cove.

If we choose to, we might approach the topic of that cultural heritage desecration in a way that offers something positive. By considering the combined initiative and effort of ancient and more recent cultures, in the construction of modern Sydney.

Likewise, we might regret the obliteration of the hut that Arthur Phillip ordered for the use of his former prisoner (and later, teacher and friend) Wollarawarre Bennelong. Instead we might reflect on the fact that bricks were repurposed – incorporated into the structure of the lighthouse built at South Head.

Those bricks represent a conscious effort by Phillip to extend opportunity and care, dignity and hope, to Aboriginal Australians. A well-meaning, albeit misguided, attempt to convert Bennelong to the ways of Europeans, with a focus on individualism and ownership. The symbolism of their re-use as a lighthouse is a fitting tribute to the Australian continent’s first international traveller.

The confected brand ‘history’ of James Squire™ is, sadly, silent on the lengths to which the real James Squire went extending protection and care for displaced tribes and clans of the Eora. I believe that omission is not an oversight, but a deliberate choice.

In fairness to Malt Shovel Brewing and Lion Co, it is an understandable one. The experience of alcohol by Indigenous Australia has been, in the main, an unhappy one. But it underscores the failure of the James Squire™ brand to offer anything of substance and lasting value.

The onus on today’s alcohol manufacturers, surely, is not to ignore the inconvenient downsides of alcohol in our national story, but to deliver improved outcomes through corporate social responsibility and corporate social investment programs.

To remain silent on the most remarkable achievement of the real James Squire – his care and concern for Indigenous Australia – dishonours the man.

Worse, it denies modern Australians a source of inspiration. Australia is getting better at facing up to the ugly truths of colonialism. It is time we also shone more light on sources of pride, beginning with James Squire.

BY ON 29 September 2020
Adam Joseph has worked for federal Coalition tourism and regional development portfolio holders during the Howard Government and Abbott Opposition. He is a former (environment and community) director of the NSW Minerals Council, and is a past government relations director of the Australian Water Association.