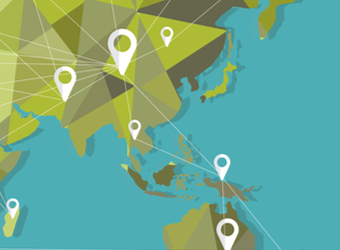 The diversity of the Asia-Pacific region is staggering, but common issues, innovative methodology and a lot of trial and error have made running multi-market projects easier over time, says Weber Shandwick’s Tim Sutton.

Recently named Asia Pacific Consultancy of the Year by The Holmes Report, Weber Shandwick’s regional chairman, Tim Sutton, spoke to Marketing about managing the complexities of an Asia Pacific agency, ­from service offerings to talent.

M: Big question first up: what does it take to run a successful business across Asia Pacific?

TS: We’re still trying to work it out, is the honest answer.

Asia Pac is this crazy, crazy region. It extends 10 or 11 flat hours flight time north, you can do a similar time to India, and it’s four or five hours across. If you’re sit in New York or London and you talk about Asia Pacific, it seems to make a lot of sense. It’s a big wodge on the map, and you say, ‘Great, that’s a region’. But we’re talking about a region which is hugely diverse. It’s not just the sheer geographical size of it – that’s one thing – but it’s hugely diverse in almost every measure you can think of.

That includes political systems, whether a one-party state in China, or the systems in Singapore or Hong Kong which are well-governed but not fully democratic in the way you’d understand them in the UK or Australia. The federal system in India, which is a crazy democracy and the largest democracy in the world. So the political systems are hugely different.

Languages, of course, are mind-blowingly different. Cultures and religions are hugely different.

You try and work out what Australia has in common with India, has in common with Japan, and it’s really hard at first to write many things down on a piece of paper. But, having said all that, we do try to make sense of it, and a lot of clients manage to make some good sense of it as well. I suppose there are two keys to that, I think.

One is that, in spite of all of these countries and markets being hugely different, they do actually share some things in common which distinguish them from large parts of North America and Europe.

TS: One of the things they share in common is that these are societies which are generally – with the exception of North Korea – becoming more pluralist in their nature. Whatever their political system, be they one-party states or Western-style democracies or the hybrids in between, they’re becoming more pluralist in that lots of different interest groups within those societies influence for power, influence for agendas, and they do so legitimately. Even in China, there is a legitimate system of governance and people can exert influence and do exert influence and they’re allowed to do that. That applies pretty much across every market. With the exception of North Korea, you’d be hard pressed to exclude many others.

Even in countries with very different political systems, say Australia, where that pluralism is happening within societies, that’s very fertile territory for businesses like ours, which are to do with stakeholder engagement.

Even though the model we use can be quite different to what we do in London, Brussels or New York or DC, nonetheless a pluralist model is good news.

The second thing is that all of these markets to varying degrees – Australia being a main exception – share common issues. Examples would be the relentless rise to urbanisation away from the country, the growing issues of inequality in income and what to do with the destitute poor. The issues of infrastructure investment – roads, citizen engagement, building architecture – how to do that. Really basic things like clean water and toilet facilities and so on.

[And] huge trade surpluses developing with the rest of the world. So there are good things on this list as well as bad things on this list. They’re hugely more energetic and high morale – high confidence markets I think is the best way to put it – than they were pre the Asian financial crisis. If you look at the last crisis, in 2008-9, in the West with Merrill Lynch, Lehmann Brothers and all that – hardly effected Asia, really. Hong Kong carried on as before, Tokyo pretty much carried on as before. They’re a lot more confident in their predictions and they’ve got a greater share of world trade.

Nearly all the markets share these things, so what starts off as being this weird, wacky, huge region actually does have quite a lot connection points. Australia’s a little bit different for obvious reasons, but even Australia is trying to integrate itself more and more with Asia and is finding common grounds.

M: How has your organisation adapted, evolved in the region?

TS: We’ve got more smart on how to run programs for clients.

Last year we did 130 assignments for clients which involved three or more Asia-Pac markets. Say for MasterCard, we were running in a lot of Asia-Pacific markets, managing up to 20-plus markets.

That again is challenging. It’s not like advertising where you press a button and run a campaign in every country because of the cultural differences.

We’ve got a really inventive system – something we call the ‘client relationship leader system’ – where we hub a global piece of business, can be out of Sydney but it’s very often these days out of Hong Kong or Singapore or Shanghai.

We have a methodology for how we manage global clients, which was actually featured not so long ago by Harvard Business School because it’s quite innovative. That doesn’t iron out every problem, but it does give us and our clients quite a good grasp on how you overcome some of these big cultural, linguistic, philosophical differences between each country.

M: Are multi-market campaigns now always run from one base rather than briefing in multiple offices?

TS: Not always-always but typically, yes. It’s hubbed out of one place.

What has changed – and Asia-Pac has become more interesting for this reason – is that 10 or even five years ago, 90% of programs would have been run out of either Sydney, Singapore or Hong Kong.

Now, we hub business out of Shanghai. We represented the successful Tokyo bid for the Olympics which was hubbed out of Tokyo and ran globally. We’ve hubbed business out of Bangkok for clients like General Motors.

Increasingly we’re able to go into cities which were previously regarded as secondary and we’re able to run multi-market pieces of business out of them, partly because the talent is better than it used to be, partly because the infrastructure is better than it used to be. If you go to Kuala Lumpur or Seoul, they have fantastic airports and fantastic infrastructure and so on. Sometimes I go back to Heathrow and think I’m going back to a third-world country. Even though I love my country dearly, compare it to Incheon or Changi… There is a duality to these place, you know, that even though they’ve got all these problems they also have some really swish infrastructure.

M: On your comment about talent getting better, is that talent coming through locally or imported talent?

TS: Kind of both, but the latter is reducing. I’m an example somebody who came from Europe, who worked in London a long time. Looking around our office here [in Sydney] you’ve got a lot of Brits or other people in Australia. Whinging Poms, like me, who made the journey.

We’ve always had, in Singapore and Hong Kong, a large number of expats who’ve come in from North America or from Australia – a huge Australian diaspora. We’ve always had people coming in to Asia-Pac from so-called Western markets and taking senior positions and running agencies. That’s not going to stop today, but it is reducing.

What we’re finding, and what’s important to us, is that, increasingly, we are getting better – we being the industry, not just Weber Shandwick – at delivering and fostering local talent. We’ve got better at retaining it, which we were not very good at before – turnover was huge, and still is in one or two places, but it’s getting better.

The word we like to use is making sure the offerings are ‘authentic’. If you look at our website – and I’m not boasting about this, it’s just common sense – all of our MDs in each market are pretty much from that market. There are exceptions, such as China which is headed by an Australia, but he’s been in China for something like 17 years, so he’s pretty authentic now.

That is important not for reasons of morality or diversity, although I happen to believe in those things, but it’s important because of the authenticity of what we take clients. I personally believe that if you’re going to go into any of these markets you’ve really got to be able to demonstrate you understand them.

And the final reason [local talent] is getting more and more important to us is that, until, again, five years ago, we were pretty much net importers of overseas clients into Asia-Pac. In other words, most of our client base and most of our competitors, were representing Western multinationals, whether American or European, and as they moved into Asia-Pac and tried to extend their operations here we were representing them.

We still do represent a lot of them, it’s still a fair chunk of our business, but we are now finding around about 30% of our business are Asian domiciled clients. They can be Australian, Chinese, Japanese or, increasingly, Indian. These are businesses, some of which either are or aspire to be global players. The big Japanese companies are already global players, so are companies like Samsung in Korea, and so on, and LG. But there’s another category of companies – the Lenovos, the Haiers, the Huaweis – and there’s a layer below that which are not global brand names yet but very much will be in the next five or 10 years. We’re beginning to seriously export business, as an Asia-Pac agency, back to London or North America or wherever we happen to be domiciled, and that’s important to us, too.

« The future of ecommerce has another ‘m’ in itFeature: A brand-led reinvention of higher education »