During a visit to Hiroshima, Australian Red Cross CEO Robert Tickner was shocked, not only by the destructive nature of nuclear weapons, but by the fact that in this day and age there is no specific law against dropping a bomb.

Throughout the Cold War from 1945 the world was on tenterhooks, waiting for either Russia or the USA to ‘drop the bomb’. Ironically, the nuclear stalemate provided by the balance of weapons meant no one did drop a bomb, but this was through luck rather than political will.

The clear and present danger of nuclear threats ensured the weapons debate remained high on the public agenda throughout the second half of the 1900s. But the new generation of youth (Gen Y) are barely aware of the Cold War, and the very real danger of such weapons. 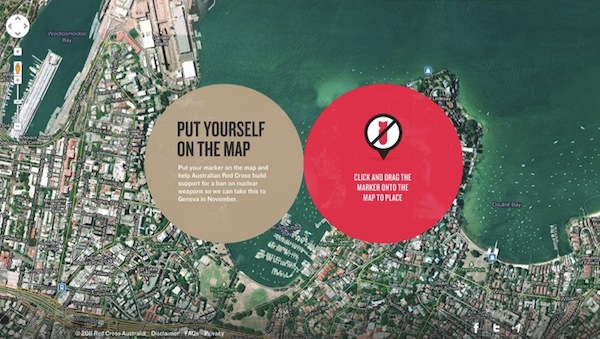 In 2011, Australian Red Cross decided it was time to reignite the fight against nuclear weapons. BWM needed to create a movement that would engage the younger online population, and deliver measurable results to take the cause global.

Returning from Hiroshima Tickner’s dream was to make the use of nuclear weapons illegal.

His challenge was clear: to re-ignite the debate on nuclear weapons with a new generation, and to prove ‘nukes’ were a big issue again. The follow-on objective was to convince the International Red Cross member states that it’s an issue worth fighting for and one that will have the support of the global population. 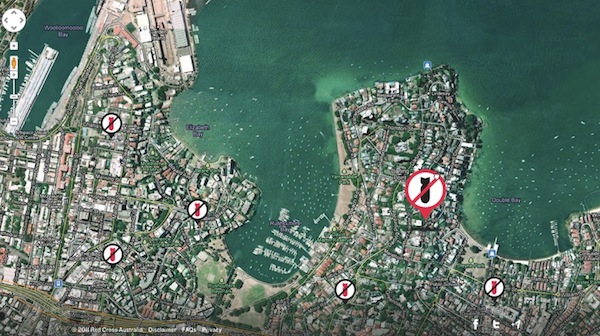 It would seem obvious to use Tickner’s Hiroshima experience and traditional broadcast media to highlight the devastating threat of nuclear weapons.

But, BWM was curious to delve deeper and understand exactly what Gen Y felt and understood about the issue. Interestingly, while not ‘top of conversation’, prompted awareness of the issues was surprisingly high.

It was clear that most people remained concerned about nukes, but were under the misconception the issue was sorted.

When presented with the facts, even in a country as far away from the action as Australia, the revelation that nukes are proliferating in places like China, Pakistan and North Korea, started to represent a very real threat.

Suddenly the issue became very clear and present again. We needed to address the misconception, present the facts and empower Gen Y to take action.

BWM and Pollen’s strategy was to personalise and localise the threat, making it relevant and immediate for Gen Y. An easy, personal and shareable mechanic would then empower them to take action and spread the word across their social networks. 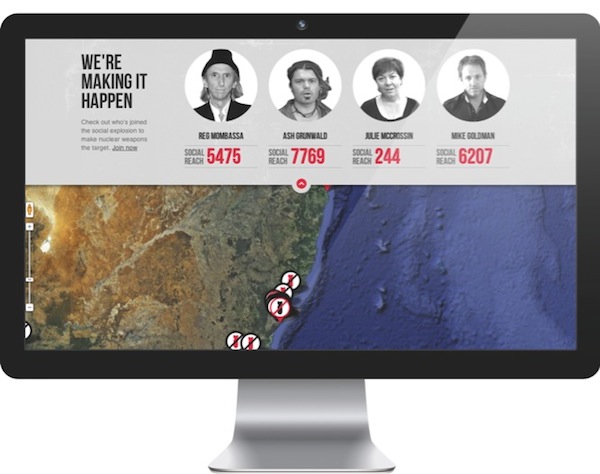 We enabled users to experience first hand the shocking impact of a bomb drop in their own back yard. Then we made it easy for them to use their social influence to help ‘destroy’ nuclear weapons.

Launched on the 66th anniversary of the bombing of Hiroshima, a Facebook page was set up as a platform for discussion and debate. Provision of shareable content was critical from day one: celebrity endorsement was kindly donated to spread the word via Facebook and Twitter. Ruby Rose, Mick Fanning, Reg Mombassa, Mike Goldman and many others contributed video content to support the campaign.
This coordinated blast created the ‘social explosion’, which maximised the impact of our message.

This component asked permission to utilise participants’ social media accounts to blast a one-time message to their network. The message reached a new audience, asking them to repeat the action and further spread the word to ban the use of nuclear weapons. This created a ripple effect across the social web and empowered users from different place at different times to participate in a singular optimised and coordinated virtual protest.

On 26 November 2011 in Geneva, Robert Tickner and (Australian) Red Cross took the campaign case study to spearhead its recommendation to the Supreme Governing Body of the International Red Cross and Red Crescent Movement.

At this body, Australian Red Cross was one of the key advocates for the passing of an historic resolution which pushes for countries to ensure that nuclear weapons are never used again and are ultimately eliminated.

This resolution was overwhelmingly supported by 186 societies with many member states keen to run the campaign in their own countries.

If you can’t see the campaign video below, please refresh this page.

« London Olympics – inspiration for PRsB2B marketers up for the sales game? »