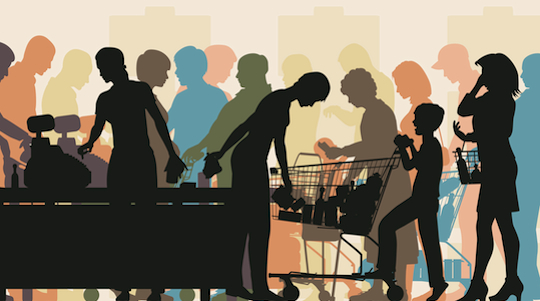 Dominant retail giants Wesfarmers – owner of Coles supermarkets – and Woolworths hold a 70% of market share of Australia’s fresh food grocery market, but have had contrasting fortunes over the past few years. Half-year results for Wesfarmers and Woolworths for 2016 show very different outlooks. By Shumi Akhtar and Farida Akhtar.

Meanwhile, the major retail players are continuing to feel the disruptive impact of smaller players such as Aldi and highly competitive market conditions; both will have employ new strategies away from the tried and true defensiveness that has worked in the past.

Wesfarmers reported a net profit after tax of $1.4 billion, up 1.2% since the same time last year, while Woolworths reported a net loss of $973 million after a profit of $1.3 billion. Over the last few years Coles has seen stronger sales growth and comparatively better market share.

By contrast, Woolworth’s strategy problems with its home improvement business, Masters, has been widely ventilated. The company attributed $1.8 billion loss to the costs related to its exit from Masters.

Woolworths’ underlying profit was $925 million, still down 33% on prior year. Woolworths would hope that its exit from the ultimately costly Masters endeavour will serve as a boost to investor confidence.

Woolworths has also struggled with branding and has seen advertising agency changes over the last few years the most recent being the dropping of Leo Burnett and a return to M&C Saatachi.

Perhaps more revealing to the outlook of the industry are some of the underlying similarities in strategy. Both Woolworths and Wesfarmers emphasised price deflation, cost reduction and further price cutting, as key strategies.

The companies expect highly competitive market conditions and consumers to remain price sensitive, and will largely focus on improving supply chain productivity, through cost reduction. Woolworths is reducing its spending on activities such as marketing, property acquisition and rent as part of $500 million in cost savings during the 2016 financial year (July 2015 to July 2016).

Likewise, Wesfarmers has highlighted similar measures, with cost cutting objectives, the company hopes will allow them to lower their prices in the supermarket even further.

In an industry where profit margins are already low, such intense competition would carry significant risk. If sales don’t meet expectations, the retailers have little room to lower prices when margins are low. As a consequence, covering fixed costs like maintenance and rent of stores becomes increasingly difficult and the likelihood of making a loss is higher.

To some extent these price wars reflect the two retail giants directly competing against each other, but another factor is the disruption caused by new entrant Aldi. The supermarket chain has gained 11% of the market since it came onto the scene in 2002, using its streamlined, low cost supply chain to undercut Woolworths and Wesfarmers on price.

Aldi is a unique player in this space. In the past Coles and Woolworths could exercise their market share and size to squeeze out small producers; but Aldi is a different beast, a global company with a presence in both Europe and the USA.

Aldi may not even be the biggest problem facing the locals, if reports that European retailers such as German retailer LIDL are sizing up the Australian market prove true. LIDL is the fourth biggest retailer in the world, with $128 billion in annual sales. Whatever hold true for Aldi is doubly true for LIDL. Other hypotheticals floated around Danish discounter Netto and UK grocery giant, Tesco.

The traditional defensive strategy against competitors employed by the Aussie giants relies on economies of scale, being larger than your rival and being able leverage this efficiency to deliver a cheaper end product or more controversially to loss lead and force your opponent out of business maintain your market share and eventually maximise your profit.

Woolworths and Coles are falling back on their old ways to try and beat Aldi, the companies’ corporate strategy for the most part is focused on a doubling down on the traditional squeeze out all newcomers approach. However Aldi brings global resources to the table that Woolworths and Coles don’t have access to.

In the retail sector Aldi will continue to steal market share from Wesfarmers and Woolworths more so if the companies continue with old strategies and don’t think of a way to innovate the retail space.

« Online video beyond brand advertisingCreativity and crowdsourcing: how does Australia stack up globally? »