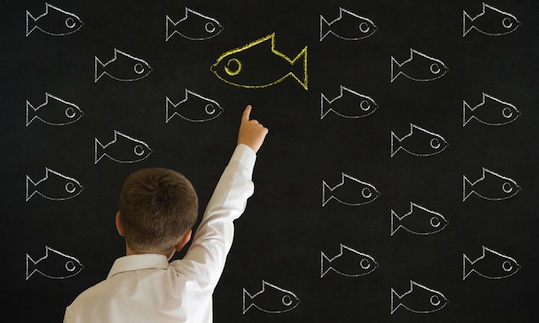 Graham Winter walks us through how to open up ‘mind silos’ within our organisations in order to reach their full potential.

We only use 10 percent of our brains. Truth or myth? Myth of course, however is it possible that it’s actually our enterprises that are missing out on 90 percent of their potential because of the way people think? The evidence seems strong. Exponential technologies are widening the gap between high flying companies and the rest, however it’s not the technology by itself that makes the difference but rather how nimble these companies are at thinking and acting as one to scale the value of ideas. Those who do it well are transforming their businesses to unlock a lot more than 90% of untapped potential. They’ve escaped from an ‘experts-in-silos’ mindset that continues to trap their more cumbersome competitors.

A mental model for transformation

To find that untapped potential we first need to understand the concept of ‘Sky to Ground’ as described in my most recent book Think One Team (2nd edition). The concept is simple and the implications are immense. Look at the Sky to Ground diagram and you’ll readily see the familiar journey from Q1 to Q2. This is the classic linear industrial model which means that we create a specification and deliver quality at minimal cost. This is step-by-step change and managers and technicians love it because it’s manageable!

Now look at the journey from Q3 to Q4. This isn’t about step change. It’s about a loop of constant testing and refinement, until a new business model is ready to be scaled and delivered (Q1 to Q2), or discarded for another idea. Managers don’t like it because it’s ambiguous and technicians don’t like it because they can’t just stay in their own silos.

The untapped potential for most enterprises (and people) lies in being able to play all four quadrants(step change and loop change) at the same time. Few of us play this well and the key reason is the silos in our minds. 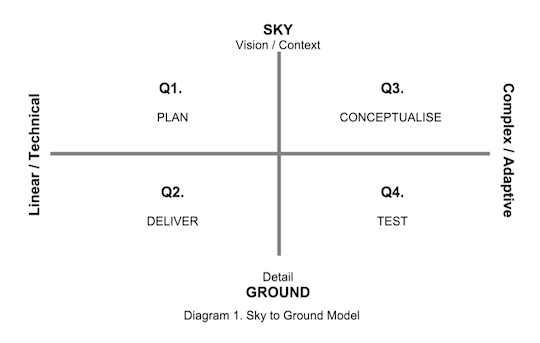 Two silos in our minds

1. We protect our paradigms

Pablo Picasso once said, ‘Every act of creation is first an act of destruction’. Poetic yes, but also confronting to tell a management team to destroy what they’ve created. In his book titled Paradigms: the Business of Discovering the Future (1993, HarperBusiness), Joel A Barker posed the question: ‘How do we get ahead of the game by predicting future business products and services?’ While most people look to trends, Barker suggested that trends are misleading when innovation is discontinuous. Instead, says Barker, the next generation of products and services is always the solution to the problems or opportunities that the current model doesn’t solve. For example, the smart phone wasn’t a continuation of a trend. Instead it transformed mobile communication while also mopping up the camera, calculator, music player and so on.

Simple? Not really, because as Barker explains, the managers and technical experts are particularly defensive about their own products, and refuse to be fully open to what’s wrong with them. Their arguments for extensions to current trends instead of breakthroughs leaves the future not just untapped, but unreachable. Think Nokia and Kodak for recent examples.

2. We are oblivious to our values

If paradigms are a visible problem, then values remain hidden and misunderstood as the underlying driver of many blind spots and disconnects. The simple and effective Window on Work Values model developed by Dick McCann, one of the founders of Team Management Systems, is helpful to look inside our mental silos. This model highlights the inherent conflict between two sets of value types. The first set describes the values of organisational constraint and organisational freedom. Imagine the leadership team of a bank who have well-developed (but nicely concealed) values of conformity, compliance and respect for authority. These are the values of Organisational Constraint. How could you not have these and survive in a bank? Of course the managers see the opportunities of digital disruption and they hire a whole bunch of people who value independence, autonomy and equality. Not surprisingly, these are the values of Organisational Freedom and they make intellectual sense to the managers who ‘walk the talk’ by discarding their ties, talking about ‘failing fast’ and imploring people to take risks.

Should we be surprised when managers become increasingly uncomfortable with the freedom-like behaviours and (subconsciously) find subtle ways to rein in the people who they are telling to be free thinking and bold? You know the answer!

The second set of values in the Windows on Work model contrasts Group Focus (putting the group before the individual) to Individual Focus (putting individualism and personal goals at the fore). We only need look to the typical HR practices of rewarding individual KPI’s and directing performance reviews at individual level (while encouraging teamwork and collaboration) to see how oblivious we are to the conflicting messages we send. McCann’s model is readily applied to most organisations and perhaps never better than in universities where academic values of freedom and individualism collide with the management values of constraint and group focus. Can you see why silos block one team thinking?

Three ways to open up the silos

Despite the obvious power of the silos in our minds, here are three ways to reduce these protective behaviours that are wrecking Sky to Ground teamwork.

When a group of public service leaders began a 90 day change project with a design thinking activity, they quickly recognised how protective they were of their own paradigms. This awareness helped them to be more open to the opinions and experience of communities (instead of defending theirstatus as experts). Similarly, when a bank leadership team was extremely frustrated with themselves and their workforce, they found that a quick reflection on the Windows on Work model helped them to see the problem and to respond accordingly. Awareness is the first and most powerful strategy to open up the silos in our minds.

2. Embrace growth instead of change management

Ironically, there has been little innovation in change management methods despite the popular models failing to grasp the loop (adaptive) change. New models based on in-the-field learning models and fluid teamwork are now beginning to address both the technical and adaptive. They connect the values of compliance with freedom through fast debriefing/reflection loops, and they connect the values of group with individual through accountability models that encourage freedom with engagement. By opening our minds to learning and to continually changing we see and adapt to the real world as it evolves and not through discrete change management projects.

3. Be open to real diversity

Being open to real diversity is a powerful way to move outside existing mental models. Real diversity means recognising and respecting both the entrenched and enlightened values. It is seeing from the other’s perspective not from a personal or ideological paradigm. It’s not about judging whether the other person is right or wrong, but rather in thinking about context and whether what’s being considered might work or not work in that situation.

We all need psychological structure and that comes from our values, belief and assumptions. The challenge is that our world has changed from the way it was when we learned or inherited this structure. It’s time to adapt. Awareness of course is key, and if we can be like the young child, ever curious, fascinated by things that are different, and willing to co-create then we can learn and grow. And it is learning together that opens up the silos in our minds because there are treasures in yours and treasures in others. We just need to find a way to open the windows and share the possibilities together to unlock that untapped potential.