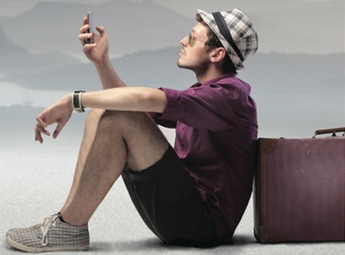 This feature article was first published in the April issue of Marketing magazine. Subscriptions are available in print and digital versions.

SoLoMo: The latest buzzword to emerge may not roll off the tongue, but it may just be the next leap forward for consumer targeting.

Touted as the next big thing, social commerce elbowed its way onto the agenda in 2011, transforming the way retailers approached ecommerce. None other than Mark Zuckerberg proclaimed, “If I had to guess, social commerce will be the next area to really blow up.” The concept – anything that gets consumers talking about or buying products in a social setting – saw social recommendation, sharing and user reviews play a key role in the success of Netflix, Pandora, Etsy and Amazon, to name a big few.

Now in 2012, as our thought leaders rush to espouse the next big thing, a new buzzword has emerged: SoLoMo. Simply put, it’s an extension of social commerce – selling or marketing that utilises social platforms with the added context, courtesy of the mobile phone, of location. SoLoMo takes the social graph and puts it in the shopper’s pocket, so that marketers, as long as participants are willing, can communicate at the point of ultimate relevance. It’s a trend to look out for.

But while it’s causing a lot of buzz, how genuine an opportunity it is and how possible to implement is yet to be established. For some, such as travel marketers, it’s heralded as the way forward. Others claim it’s no more than a new title for a whole ecosystem of existing concepts around mobility. Either way, we thought it was worth a look.

The social side to shopping is a heightened reality of today’s retail landscape, an influence that has been amplified by the rise of social media. Facebook, Twitter and the like have had a profound impact on the way we communicate, as well as the purchase cycle. Research conducted for the Product of the Year awards revealed that recommendations from within the peer circle have become more influential than recommendations from experts, official sources of information and even review sites.

But wasn’t this always the case? Consumer behaviour theorists, such as Malcolm Gladwell, talk about the law of the influential few who wield the power to make ideas popular – a theory of cumulative advantage where, under the right conditions, word of mouth can turn brands or products into social epidemics. These influential peers were always part of the cycle, being the driving force behind making new ideas sticky.

What has changed during the digital revolution is the ability of influencers to disseminate their clout.

Identifying the key points of influence in the purchase cycle and making an effort to dominate these is what, in today’s world, retailers and brands face the increasingly difficult task of doing. Now that this influence is so deeply ingrained in the social media world, most brands have little choice but to enter the space. Social commerce is the link in the chain, but it is more than just a Facebook fan page or selling via social networks. It’s about generating word of mouth and social recommendation from the people that count, to influence consumers during the purchase cycle.

The increasing sophistication of smartphones, and impending arrival of the critical mass required for services to take root, is what will add the ‘lo’ and ‘mo’ to the ‘so’. JWT Intelligence earmarked SoLoMo as one of the top 10 developments to watch in its annual trend list. The trend watcher believes helping people bring their online networks into the physical world can dramatically increase consumer engagement and not only mirror, but aid shopper behaviour and mindset.

Overlaying the social graph and location presents opportunities for marketers to tailor messages and offers, and deliver them at the ultimate point of relevance. Consenting shoppers can sign in using their Facebook accounts so marketers can show what their friends have bought or recommended, serve up a more tailored experience and, in some cases, enable customers to interact with friends in real time.

Location-based apps like Foursquare and Yelp can help drive traffic to stores, restaurants and events, by giving users an incentive to ‘check in’ at locations and encouraging friends to meet up. Retailers can tap into SoLoMo by encouraging ‘check ins’, ‘Likes’, ‘hauling’ and ‘reviews’ to amplify word of mouth from brickand-mortar customers. 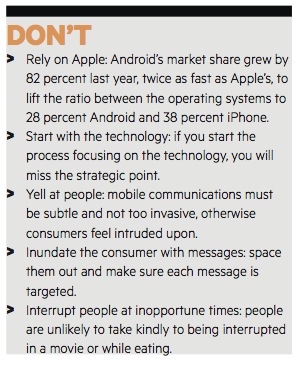 For travel marketing, some are calling it the way of the future, helping the hyper-connected travel consumer to interact with brands. Margaret Mastrogiacomo, research manager at HeBS Digital, lists possible applications of the trends for hotels. “Instead of researching attractions during a hotel stay, mobile applications will detect a traveller’s location, what they are looking for, provide directions, push specials based on geo-location, and even allow guests to share their experiences in real time.”

Jennifer Okula, vice president of client and market development at Millward Brown, elaborates further on how the future of mobile marketing will be intertwined with social and location. According to the researcher, 55 percent of smartphone owners in the US rely on their phones for directions or recommendations that are based on their current location. These numbers are expected to grow rapidly.

Okula says, “It’s obvious that mobile, by nature, allows brands to talk to the right people at the right times in the right places, and brands will start to use the platform more effectively in the next year.” Okula expects to see increased use of existing geo-social apps like Foursquare, Shopkick and Yelp, retailers experimenting with geo-fenced mobile marketing companies like Placecast and group buying companies like Groupon and Living Social to provide push content and alerts for real-time local deals through apps.

She predicts brands will create more of their own apps that tap into SoLoMo to increase the relevance of mobile ads by using location targeting and embedding social content and shareability.

In theory, SoLoMo sounds impressive. But in practice it has proven difficult to implement, even for those in a position to do so. Group buying giant Groupon was one of the first companies to give it a shot, launching its ‘Groupon Now’ app in mid-2011. The locationaware app enabled notifications of deals to pop up on consumers’ phones as they walked past participating merchants. It was seen as the next step for Groupon as the business moves to localise its deals, but, according to data from digital agency Beyond and deal aggregator Yipit, the app’s revenue growth has already begun to slow.

Facebook, arguably the best placed entity to implement SoLoMo, geared up to do so with the launch of Facebook Deals in April 2011. Four months later, however, the company abandoned its trial of the service. “We think there is a lot of power in a social approach to driving people into local businesses,” the social network said in a statement. “We’ve learned a lot from our test and we’ll continue to evaluate how to best serve local businesses.” The market speculated that Facebook simply wasn’t set up to source deals from merchants in the way group buying companies are.

Not to be deterred, it has since announced a watered down version of the concept. Facebook ‘Offers’, which lets businesses share coupons that consumers can access via email or mobile device, was introduced at February’s Facebook Marketing Conference.

Joe Barber, founder of Third Screen Media, is sceptical about the new buzzword. “SoLoMo is in reality just another buzzword encapsulating what’s been emerging over the last two to three years anyway,” he says. “Using SoLoMo as a catch all phrase for the mobilisation ecosystem is in reality generalising about the entire momentum surrounding mobile. In my opinion, it’s simply a buzzword being thrown around without due regard for the best way to approach each part in context to objectives, consumers and target outcomes.”

Senior analyst at research company Forrester, Steven Noble, has hopes for the integration of social and local, but thinks it’s too soon. “Increasingly we’re able to interact with customers in terms of their context – who are their friends, what do their friends believe, where are they, what are they feeling when they engage with you, what do you know about their previous shopping habits,” he says. “Our ability to act on their context, especially through mobile devices, will only increase.”

Noble expects, however, that it will be four to five years before we see this type of mobile marketing hit its stride in Australia. “The vast majority of businesses have far more pressing concerns to deal with today. The fact that their websites are not optimised for mobile devices is a far bigger barrier to profitability than the fact that they’re not offering local or social coupons.”

As we’ve seen with a number of digital developments, fortune has favoured those who prepare for emerging trends and those first to market. While SoLoMo will be more suited to some industries than others, it is still something that marketers should prepare for as the expanding mobile ecosystem comes into play. So we’re left with the question: how will brands know when or if they should act on SoLoMo?

Steven Noble counsels marketers to start with an understanding of the following: their own strategy, resources and capabilities, and the nature of their customers, including how they do, don’t and could behave on their mobile devices. Given that this is still so new, he advises large businesses to set aside a small amount of budget to experiment with mobile couponing start-ups, such as Yowza!!, Shopmium and Peekaboo, to gain understanding that will stand them in a good stead for the future.

More generally, the experts Marketing spoke to in pulling this story together, offered a range of dos and don’ts for mobile marketing that integrates social and local elements.

No matter what you may think of the moniker (try it in your best Barry White tone), SoLoMo will continue to be talked about throughout the year. The potential behind its proposition – a marriage made in heaven between social, local and mobile – is plain to see. The future of retail and many other industries is clearly multiplatform. SoLoMo represents the bridging of the physical and the online, with the mobile acting as the glue to join the two together. While it may not be a silver bullet for marketers, or even an entity in its own right, SoLoMo is a trend to watch out for.