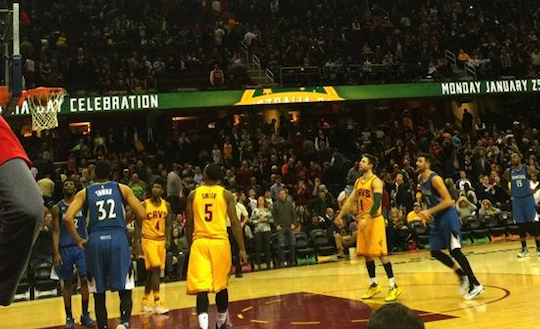 Paul Labagnara remembers his Australia day spent at an NBA game in Cleveland, where Up & Go sponsored the Cleveland Cavaliers to promote their product to Australian NBA League Pass viewers.

While Australians were having BBQs, relaxing at the beach or just putting their feet up en-masse, I was fortunate enough to be a guest of Sanitarium Up & Go, the Cleveland Cavaliers and the NBA to celebrate Australia Day with Matty Dellavedova and the rest of the Cavs.

Over the past six months or so we have been working with PCG, one of the USA’s foremost sports marketing consultancies to identify potential commercial partners and help design what the strategic fit could be.

The result is a sponsorship first.

An Aussie brand, sponsoring a US team, all designed to help push the Up & Go message with its core target back in Australia.

It would have been easy for Up & Go to say, ‘let’s look closer to home’. For the NBA to focus on geographies with a bigger population, and for the Cavs to support a company with more local ties.

This truly is a sponsorship model for the digital age. An overseas property. A target group that is one of the biggest online subscribers to NBA league pass, a free to air channel as a lead media partner. All underpinned and made possible because a local lad – Matthew Dellavedova – has become a cult figure in Cleveland. 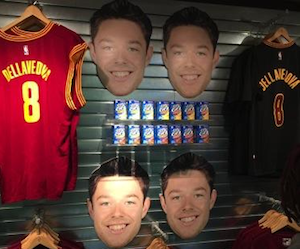 It was felt Dellavedova’s humility and newfound exposure were a perfect fit for Up & Go. He is making a mark, doing it his own way, playing an important role. It is a story the cohort of 18-24 year old males in Australia can aspire to. Not so much about achievement, as it is about doing it your own way.

Dellavedova’s story also reflects the great narratives of Australia. The underdog. The hard worker. In a world that is brash and fast, ‘Delly’ stands out for his effort, application and humility.

A similar narrative to which Cleveland, in it’s own way, is all about. The city is part of the rebuilding US manufacturing heartland. In these winter months, Clevelanders are faced with an uncompromising climate, frozen lakes, bare trees and a grey outlook.

Against that backdrop, the Cav’s put on a great show. And the sponsorship was executed incredibly well. A testament to the work of all involved.

The crowd felt really engaged. Dellavedova offered lessons on Aussie slang. The Aussie national anthem rang throughout the Quicken Arena. There were quiz questions about Australia to tweet in responses to. Dellavedova also taught his teammates how to handball a footy. The Australian Consul General made the trip from New York. And of course, the night couldn’t have been Aussie without a marsupial exhibition – the local Cleveland Zoo obliging.

Up & Go also were provided with moments of exclusivity throughout the night, and also had signage on padding beneath the rings. The tie in with Channel 7 helped provide some mass exposure and the free streaming facilitated by the NBA really brought the endeavor to the target group.

It was a real team effort.

Social media lit up in Australia. At one point, the top three trending hashtags on Australia Day were all about the Cavs and Dellavedova. Just amazing, given all of the activity and events occurring in Australia on the day.

For me the highlight of the night was Dellavedova. He put on a show.  He hit some big three pointers, made an alley-oop (Delly-Oop!) and defended with his characteristic tenacity.

It was his pre-game speech that said it all, however. His character shone through.  On a night that was all about his ‘path’ to Cleveland, he thanked everyone else.

He thanked the Cavs, and like the true statesman he is growing into, thanked the crowd for embracing him and supporting him as one of their own. He even gave a shout out to his parents.

It’s too early to understand the impact of the event on Up & Go sales in Australia, but purely from an exposure perspective the idea has been a resounding success.

The night changed the game in this global media landscape for how brands can think about sponsorship and engaging with their consumers.

Paul Labagnara is director at The Lab Strategy and Planning.

« Mirror neurons and the science of influenceOutdoor’s digital transformation »