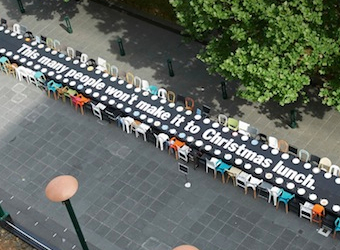 The Christmas period is the riskiest time for Victorian road users. There is increased traffic on the roads as people travel for holidays and to visit friends and relatives. There is also increased use of drugs and alcohol. On average, the last 12 days of the year result in the highest number of road fatalities. The promotion of road safety messages is a priority at this risk time of year.

The challenge was to raise community awareness of the dangers of unsafe driving around Christmas. At this time of year, cutting through would be difficult. What stops people acknowledging this danger is that Christmas is a time when they would rather be celebrating, partying, Christmas shopping and happily socialising with family and friends.

Adding to the difficulty of the task was gaining significant cut-through in a cluttered media environment filled with messages of giving, goodwill and fun times ahead. The lifeblood of PR events is attracting the media and generating coverage. In the lead-up to Christmas, news desks are bombarded with issues seeking dissemination, what’s happening both generally and commercially, and so getting editors to send news crews to events becomes increasingly difficult. The key is to capture their imagination that this is something worth covering, because it is of value and relevance to their audiences. 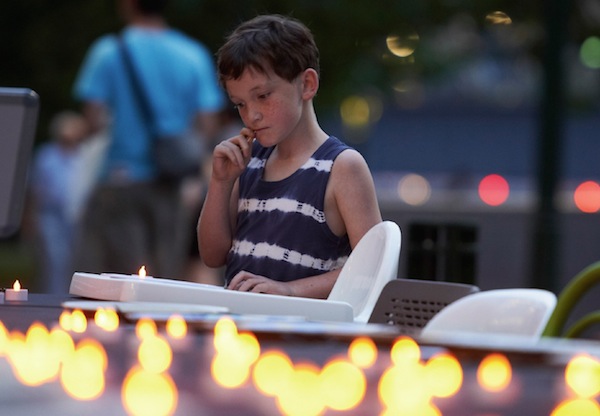 The road safety message is relevant to Victorian road users of all ages, from drivers to pedestrians, motorcyclists and cyclists. The challenge was to create an idea that tapped into a unifying human emotion, regardless of the individual’s specific attitude toward road safety and using the roads.

One thing most Victorians are united by is Christmas as a time to reflect on the year past. When it comes to road safety, this often involves reflecting on the annual road toll. This figure is used to bring attention to the unnecessary deaths on Victoria’s roads. But, because it is expressed as a number, it doesn’t provoke any emotion in people. It doesn’t compel people to think, feel and discuss how important it is for everyone to drive safely. Unless it affects you personally, it’s just another empty statistic.

Knowing that our objective was to create awareness and meaning around road safety, the starting point was to develop an idea that would add some humanity, meaning and emotion to an otherwise intangible figure over the most dangerous period on Victorian roads. 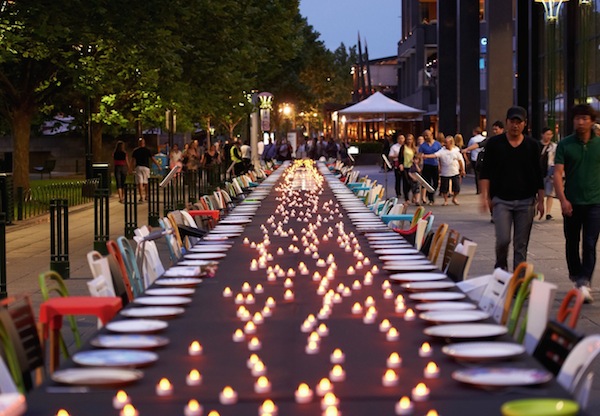 The idea was to build a long table, called ‘A Place to Remember’, representing each of the 257 people who were not going to be present at Christmas lunch. The table was placed in Melbourne’s Southbank for three days in December.

As part of personalising the message, each setting at the table was unique, each chair and plate different. There were highchairs and dummies for children and walking frames for the elderly, representing the reality of lives lost to road trauma. 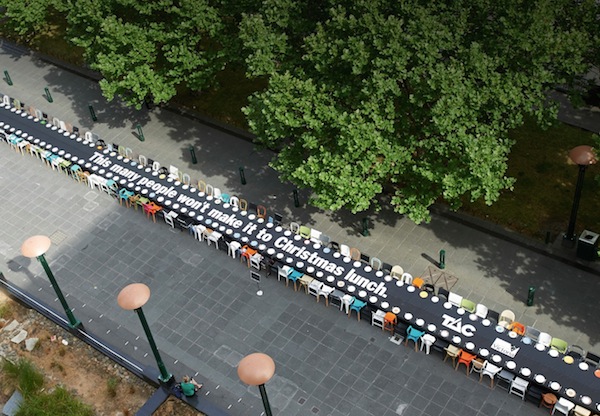 ‘A Place to Remember’ provided a compelling reason for people to stop to discuss road safety and prompt them to drive safely over the holiday season.

The table acted as a confronting and physical backdrop for the TAC (Transport Accident Commission) and the Victorian Premier to bring the media and public’s focus to the road safety issue in the busiest and most cluttered time of year for media. Not only did ‘The Long Table’ raise community awareness of safer driving over Christmas, it also encouraged drivers to make a personal commitment to road safety, to share their messages and reminded them of the grim reality of road trauma in a sensitive and organic way. It got their attention. It shocked them. It saddened them. It made them hug their children that little bit tighter and it compelled them to tell their friends and family how much they love them. ‘The Long Table’ ignited conservations between people about the importance of driving safely, which was its most powerful form of effectiveness.

It acted as a memorial for victims’ families, a place they could come to leave tributes and pass on messages for their loved ones. These powerful stories added more depth and power to the message.

Visitors to the table were also invited to engage with the message by leaving messages on tea lights and Christmas cards.

The hashtag #aplacetoremember gave people the opportunity to spread awareness of the message by sharing their experience with others through social media. The sharing of one photo acted as the beginning of a conversation.

Over three days, 25,000 people visited ‘The Long Table’ at Southbank. More than 300 people hand wrote messages and tributes to remember lives lost. These personal memories were shared along with messages of safety, hope and encouragement.

Over 20,000 Twitter accounts were reached with the message and over 200 photos shared.

‘A Place to Remember’ generated over $234,000 in free media value at the most difficult time of the year. Channels Nine, Ten, WIN News and Sky News, MX, The Ballarat Courier, 3AW and ABC radio, blogs and online news media including The Age and The Australian online all covered the story.

But, most importantly, ‘The Long Table’ was an integral part of a month-long enforcement campaign that contributed to the lowest December toll in 60 years.

By reminding Victorians how quickly their Christmas could change, ‘A Place to Remember’ contributed to Victoria’s lowest road toll on record. Compared to the corresponding time the previous year, the Victorian road toll was down by 18.3% which equates to 21 lives (as at May 2013), achieved against an environment with an ever-increasing number of drivers and a greater number of distracting technologies being abused in vehicles. 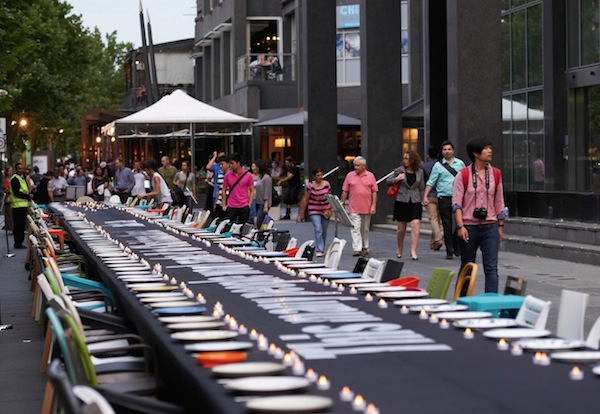 « Five apps that show Google Glass will overcome the ‘naff’ factorEngaging Gen Y in your marketing – what’s the secret? »