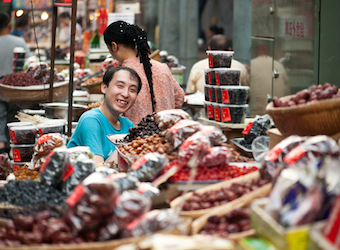 Every year, for the foreseeable future, another 30 million Chinese will go online to shop, according to a new Boston Consulting Group report. Pushed by a government-subsidised rollout of internet – and poor bricks-and-mortar retailers – China could become the world’s biggest ecommerce market within four years.

And while you’d imagine the online revolution taking hold largely in China’s eastern metropolises, it is also in some of the remotest locations, like a number of villages and counties in the Zhejiang Province, that ecommerce is being used to better the lives of the most digitally excluded segments of society.

At Suichang County, the local government has established an outfit known as 51ganjie (“I want to bring my products to market” in Mandarin), which has established service stations connected to a web portal in five remote farming villages to date.

The service stations are an attempt to help villagers – typically illiterate and without access to the internet – buy daily necessities, electronics, clothing, and farming supplies online. And plans are in motion to expand the services to allow the local farmers to sell their produce online.

Initiatives like 51ganjie are helping rural villagers benefit from the product variety and competitive pricing offered by internet retailers. While it wasn’t previously economically viable to deliver products to these remote locations, these programs make last-mile delivery possible through integrated logistics and the consolidation of orders.

The distribution channel for farm produce that will be established with the development of 51ganjie would also generate additional revenue for the local farmers, meaning a higher standard of living overall.

In the town of Songyang, a significant number of members of the local community have become electronic merchants on Taobao.com, China’s largest consumer based ecommerce site. The most unique aspect of their participation in ecommerce in particular lies in the fact that most of them are selling a singular product: modular wardrobes.

This phenomenon is particularly curious because there are no local advantages associated with the production of these wardrobes.

Most of the materials required for the construction of the wardrobes are imported from outside Songyang, and the wardrobes do not require any specialised skills to assemble that only the locals possess.

In fact, interviews with the community members reveal that many of them got into the business only because ‘their neighbours seem to be doing well’.

Despite the organic, almost haphazard, nature of this development, the benefits are clear. Songyang, as a whole, began to acquire a reputation for modular wardrobes on Taobao.com, which turned into higher sales for the villagers involved.

The sharing of production and business expertise also flowed freely, raising the quality of the products and the efficiency of business operations. There were also reports that some electronic merchants, facing a glut of online orders that they were unable to fulfil, passed on those orders to their neighbours.

More importantly, the viability of the trade has helped Songyang stem the ‘brain drain’ associated with urban migration. Becoming an electronic merchant had become a viable career option for the youths of Songyang, and they no longer have to move to the larger cities in search of employment.

In Jinyun county, the local community went online in a decidedly different way. It began with the establishment of a county-wide association of aspiring online sellers, spearheaded by two merchants who were already highly successful on the Taobao platform.

One of them was selling their own brand of outdoor equipment, while the other was a supplier of car accessories.

The association was meant as a platform for sharing of ecommerce experiences. But an unexpected development occurred when a significant proportion of the members, attracted by the success of the association leaders, started to become licensed distributors for the two electronic merchants.

This development has translated into a number of benefits for the electronic merchants involved. For the two leading electronic merchants, the growing number of distributors for their products enabled economies of scale and wider market reach, which helped their businesses grow at a faster rate than ever before.

Aspiring electronic merchants were able to take already-established brands and tap into an established customer base, which helped them enter the ecommerce arena.

These ecommerce success stories in the rural counties and towns in China provide a glimpse of the potential social benefits of ecommerce.

Perhaps it would be possible to replicate the way ecommerce was used in these cases within the rural communities of Australia to help them with greater access to supplies, new means of generating revenue, and a higher standard of living overall.