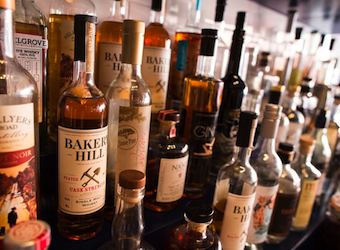 From single copper stills in the Yarra Valley, to houses of brands in Homebush, players in the Australian ‘craft’ spirits game are taking advantage of their turn on the nation’s bar. (And don’t forget the retailers.) Marketing talks to those involved to find out the trend’s impact on the liquor industry and how the country’s tastes are changing.

In less than half a decade, liquor superstore Dan Murphy’s has seen a 10-fold increase in the number of boutique spirits on its shelves.

An Australian whisky is officially the best in the world – Sullivans Cove from Tasmania received the prestigious World Whiskies Awards 2014 prize for ‘The World’s Best Single Malt’.

About 50 distilleries have popped up around the country in the last couple of decades, and Aussies want a drop of the action – bartenders are reporting customers asking for local spirits by name daily.

Marketing felt it was time to immerse ourselves in this burgeoning scene.

This article is the first of a four-part series delving into Australia’s boutique spirits – how the trend has developed, how these small producers are operating in a marketplace traditionally made up of large corporates, and what we can expect for the future.

Bartenders and retailers are latching onto an almost sudden consumer desire for local, independently-produced spirits.

“In probably the last 18 months we’ve seen a strong interest in our customer base in what I call artisan spirits or hand-crafted spirits,” Dan Murphy’s merchandise manager Campbell Stott has noticed.

“We’d range close to 800 glass spirits in our business, and I’d say now maybe 10% of those are craft artisan products, whereas it would’ve been about 1% three or four years ago.”

Consumers have developed an appetite to drink better (rather than more), and stores are keeping up.

Yuri Chlebnikowski from Melbourne’s Nicks Wine Merchants was one of the first to get behind local Australian spirits after seeing great products coming out of North America’s own microdistilleries boom.

“The Australian whisky scene has been developing and its expanded heavily. We started to cover that about five or six years ago and we’ve been covering it closely since.

“A lot of those have been very small operations and I think the genesis of craft distilling in Australia, well the new revolution anyway, has come out of the whisky segment,” he says.

Benny McKew, bar manager at inner-city cocktail bar Lily Blacks, has been trying to keep up with the boom, filling his shelves with more and more local spirits as they become available. His cocktail menu specifically names ingredients by brand, with plenty of locals making it into the recipes.

“It’s pushing us bartenders to step up our game.”

Tasmanian whisky-makers had been toiling away for a couple of decades before one distillery snagged the highest of honours in the whisky world.

“You don’t expect to win that kind of thing. You don’t think of yourself as being that wonderful,” he says modestly. “Obviously you drink your whisky and you know it’s nice, but you don’t for any minute think that it’s going to be nicer than anything else out there.

“If you look at the lineup of people who made it into the final round that we had to compete against, there were some unbelievable whiskies – things you wouldn’t in a million years have thought that we would beat.”

When the Sullivans Cove team received the phone call telling them they’d won, they stared at each other in disbelief.

Unsurprisingly, the award usually goes to Scottish distillers, but the Japanese have also been successful in recent years. The Sullivans Cove win has certainly helped to put Tasmanian whisky on the map. 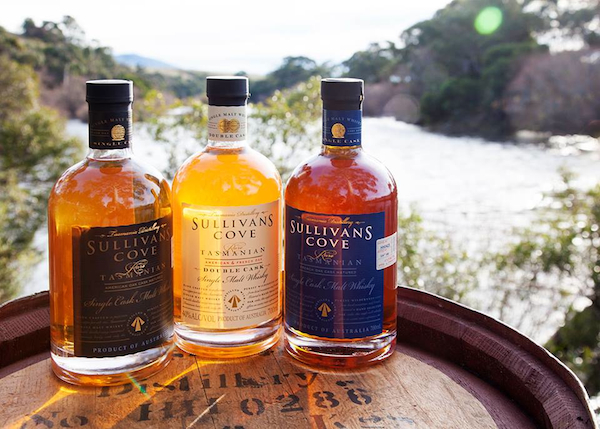 It all started with Tassie whisky

Bert Cason from Sullivans Cove explains that the Tasmanian whisky industry started laying the foundations for Australia’s now-booming scene back in the early 90s.

Lark Distillery’s Bill Lark was first, followed by Sullivans Cove and a raft of others who “took a massive leap of faith” considering the long-term investment – a barrel of whisky takes ten years to mature.

“They basically just went, ‘We’ll take a punt, let’s make some whisky’ and chucked a bit of money at it, threw even more money in it, until finally we had an industry,” Cason laughs.

Considering winemaking has been such a fruitful industry for various Australian regions, many have wondered why it took so long for locals to try their hands at making spirits.

“We’re called Bad Frankie because Sir John Franklin, the second Governor of Hobart, banned distilling in Hobart of small pot stills. Then when Federation happened in 1901 that law got passed through to all of the country,” he explains.

For a century and a half, big internationals and a few local giants such as Bundaberg Rum dominated the local spirits market.

“It was disappointing,” Costello laments. “In 1838 Irish whisky was fairly big, Cognac was fairly big – we had all these beautiful products which could have been amazing. We could have been a powerhouse but because of this law there were no individuals; it was all just big companies pumping out one big product.”

Fast-forward to the present day and Bill Lark has been dubbed the father of the Australian boutique whisky industry because he was the one to change the ancient law in 1992.

Just over two decades ago, Lark and his father-in-law were were sipping scotch on a fishing trip when they realised Tasmania would be the perfect environment in which to make whisky.

“Looking around us, it just occurred to us that we had fantastic fields of barley [and] beautiful, clean, pure water,” he told ABC’s Landline in 2009.

“We knew there were peat bogs in the Central Highlands and we thought, why isn’t someone making whisky in Tasmania?”

Lark did some investigation and was able to wangle a law change in a matter of weeks to issue him the country’s first small batch distilling licence. 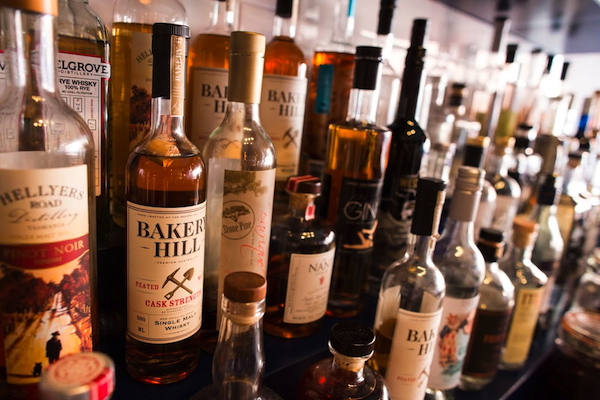 And then it blossomed

Since those first few brave batches of Lark whisky finally matured after a decade, Australian whisky connoisseurs have come to terms with the fact that local whisky can in fact be as good as, even better than, the esteemed drops of Scotland.

“In the old days people would walk a wide berth around you because they just thought the idea of Australian whisky would be rubbish,” Cason recalls.

“But over the years you start seeing their attitudes change and now we’re at the stage where people are quite open to idea that Tasmanian whisky isn’t actually that bad.”

Margaret River’s The West Winds Gin was at the forefront of the emerging white spirits market, testing the water with a similar philosophy to that of the initial whisky producers.

“We thought, we’ve made good food, good wine and good beer in this country for the better part of 200 years – why aren’t we making good spirits?” co-founder Jeremy Spencer says.

The company is now one of a string of locals producing high quality gin, experimenting with various native botanicals for flavour.

Australians across the country have started making practically everything else – vodka, rum, brandy, bitters… Bad Frankie has managed to stock its entire bar with only Australian-made products.

“I think people have got a lot more proud of being Australian. Not ocker Australian, just being proud of good quality, and people like to be local now,” Costello says.

McKew at Lily Blacks bar agrees – many people seem more interested in getting behind local products than choosing the well-known brands despite their perceived value.

“It’s getting to the point where people are calling for very specific products. Melbournians have really gotten behind the Melbourne Gin Company and Four Pillars – people come in and ask for it by name at least once or twice a shift.”

Even the big guys are excited

Now is the most significant of recent times for the spirits industry in Australia, Diageo marketing and innovation director Adam Ballesty says enthusiastically. “We’re really, really excited, we want more people to be having conversations around spirits. Clearly we love the category – it’s our business.”

Ballesty is full of optimism despite rising threats to his brands from these new entrants to the industry – customers are swapping Tanqueray for Four Pillars, Smirnoff for Dot AU and Vat 69 for Starward Whisky.

“If we’ve got new entrants coming into the market with unique stories, creating unique drink experiences, they’ll probably be able to teach us from time to time on distillation processes or different ways to go to market to connect with consumers,” Ballesty says.

“With bartenders becoming more and more revered, the conversation is in a really healthy, fantastic, fun place around spirits and we welcome them into the category.”

Dan Murphy’s insights confirms that customers are wanting to try higher quality drinks and explore connections back to producers. “It’s an exciting space,” Stott says. “The quality of the Australian spirit producers at the moment is world class and it’s just great to be part of it. I’m very bullish on the industry.”

Other articles in this series: Part One (this one) is all about the growth of the trend, Part Two tells some key players’ stories, Part Three looks at boutiques’ distribution and promotion strategies, and Part Four juggles the supply and demand issues that come when boutiques find fame.