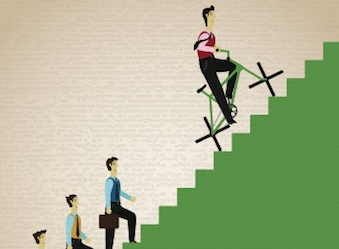 In the first of a regular column for Marketing, Steve Sammartino writes that a limited view of innovation is killing brands.

Anyone who has studied marketing in its purest form, or entered marketing as a profession, knows what it is meant to be about. In many ways, it’s just a fancy word for doing business. Taking something to the marketplace, marketing. Which means that ‘real’ marketing should, of course, involve all of the four Ps. The product, price, place and promotion all matter and need to work in concert with each other – the marketing mix.

But by the time any company can afford to hire marketing personnel, much of the system and methods have already been developed. The job of the marketer has largely been to tweak the tools, rather than build new methods or infrastructure. And this was a damn fine strategy in the past century. The business environment was incredibly stable… things didn’t change much for more than 50 years.

Marketing should be the capstone strategic arena of any business that wants to evolve and grow. But innovation has become an incremental program of doing a new version of what we already do. We live in a world of micro-iterations, which border on embarrassing, more than innovative.

Our marketing has become a world ensconced in marginal substitutes and incremental innovation. It’s also a world that is becoming invisible to anyone who isn’t stuck in 1989. Invisible because our world is becoming an exciting place of mind-blowing, rapid change.

These ‘thinnovations’ rarely solve problems for people, but are more of an attempt to solve short-term financial problems of the organisation serving them up. Consumer goods companies are the worst offenders. Their marketing and innovation departments have become focused on asset utilisation. In other words, they are largely given the task of creating new ways to sell more stuff, using the machines and infrastructure the organisation already has in place.

And I know what you’re thinking. ‘C’mon Steve, that’s the function of the profit-maximisation imperative. What CEO would be crazy enough to invest in long-lead innovation programs, when the average tenure of management is less than three years?’ Normally, I’d agree, this would be a good strategy in a stable business environment. But, unfortunately for industrial marketers, we no longer live in a stable business environment.

Democratisation of commerce and the tools of production

We are currently living through a change for the ages: a once-in-10-generations shift from the Industrial Age to the Technology Age. It’s a new epoch. And it’s three times the size of the Industrial Revolution, as it isn’t limited to the fortunate few living in industrialised nations, but every corner of the earth.

This revolution is largely about the democratisation of commerce and the tools of production. There are already more active mobile phone subscriptions than there are toothbrushes in use. This tells us everything we need to know. Start-ups are genuine threats to the Fortune 500. We only need look at the top 10 dotcom companies – companies that didn’t exist before 1994, which now have a combined market capitalisation of over $1.2 trillion – to see the size of the shift. This means that anyone can play.

Those playing the least are the brands and companies that are already successful. Most companies in established industries are, by definition, employing a set of strategies that are now severely outdated. The global strategy of most large, brand-based organisations is to not invest in developed markets. They view them as the cash cows that will fund the investment in Asian and BRIC (Brazil, Russia, India and China) nations. The problem with this strategy is twofold:

Industrial leapfrog is where marketplaces skip generations of consumer behaviour and purchasing patterns. We’ve already seen it in personal computers as our current teenagers went straight to laptops and in developing nations most people’s first computer will be their smartphone.

It’s foreseeable that developing nations will never have centrally generated electricity as we move to a highly distributed solar grid in the next few years. It’s foreseeable that the best graduates from Ivy League universities will never set foot on campus as massive open online courses (MOOCs) change the way we educate ourselves. The patterns and commerce of yesteryear will be circumvented by entirely new techniques to solve old problems.

We are re-entering a period of infrastructure building and reconfiguring in the same way as the Industrial Revolution. What this means is that the innovations that really matter for marketers is rebuilding the infrastructure across the entire four Ps. There needs to be a mindset shift from asset utilisation to asset creation. Brands can no longer leverage assets for short-term profit. They need to build new assets entirely, assets that are relevant for the Technology Age.

The problem with innovation that is limited to the core ‘proposition’ – the stuff we already make – is that companies get eaten up by curve jumps. That is, new methods that solve already solved problems via unforeseeable methods. Encyclopaedias written by you and I. Taxi services that don’t own any cars. Accommodation services that don’t need any hotels. An online music service that doesn’t even require downloads.

This applies to you (yes, you)

It’s easy to believe as a classic consumer goods marketer that these changes do not apply. That they only affect those in the data and information sectors. But it’s also worth remembering that where a product is currently sold may not exist in a few years. Or that the factory that currently makes your widget may see it being made at home on a 3D printer in a few short years. Or that crypto-currency could replace all online cash transactions.

Remember that setting up a TV station just 10 years ago would have been a multimillion-dollar exercise and now we all walk around with one in our pocket. All four Ps are changing rapidly. What this reminds us is that innovation should be flipped towards infrastructure and not just the products and services inside them. The task today for great marketers is to rebuild the factors of production for the brand and not just leverage them. It’s more about redefining how we go to market than marketing a product or service – innovation across the entire organisational construct, rather than around what we actually sell.

I can’t think of a company that does this better than Google. While its corporate mantra is to organise the world’s information, it doesn’t mean it waits for the infrastructure to arrive to allow it to do that. If a platform doesn’t exist, it goes ahead and builds it. If it didn’t it’d still be waiting for a mapping company to create Street View. Instead, it chose to film the streets from the roads itself and create a new revenue stream in doing so. It didn’t wait for the new infrastructure to arrive; it invented it.

Amazon is doing the same, with plans for delivery by drone. In short, it’s inventing new factors of production to sell its wares. It innovates through its structure, not just at the point of revenue generation. This is what serious innovations look like – non-incremental game-changers.

During a revolution, unexpected things happen. New connections are made and things that were seemingly impossible a few years ago happen. A result of this is that an entirely new layer of commerce is being built. Not surprisingly, the Fortune 500 looks a lot different to what it did a decade ago. In fact, 40 percent of those companies listed have fallen out in the past 10 years.

In the post-World War II era of marketing, we developed a kind of Harvard industrial business mindset – where we believed we all knew ‘how to do it’. We had a set of rules for marketing. Defined strategies. We knew all the answers… but all the questions just changed and maybe the most important question marketers should be asking themselves is: how should we define innovation during a revolution?

BY ON 9 January 2015
Steve Sammartino is an author and futurist who sees the world through marketing eyes. He has held many senior marketing positions and has also built and sold his own startups. His latest venture is Sneaky Surf, which is bringing technology into the surf industry. His new book 'The Lessons School Forgot: How to hack your way through a technology revolution' is out now through Wiley. Connect with Steve and see his latest projects and blog at stevesammartino.com