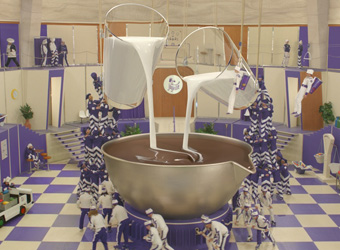 By Bruce Arnold, University of Canberra.

Can you own a colour, a name, or a sound?

Those questions have been highlighted again in the UK, where there has been another outbreak of litigation about ‘Cadbury Purple’.

Australian trademark law, like that in many other countries, allows individuals and enterprises to gain legal protection for a distinctive ‘sign’ that differentiates their products from those of their competitors.

The products might be goods – shoes, cheese, biscuits, cars or children’s toys, for example – or they might be services, such as banking and accounting.

With the ongoing shift to outsourcing, many corporations have few tangible assets. Their market valuation is a reflection of the reputation that is embodied in their trademarks. The protection is justified as an encouragement of investment and an aid for decisions by consumers, whose purchasing is assumed to be influenced by trust in particular brands.

Australian consumers swim in a sea of trademarks. Most people are familiar with trademarked corporate/brand names, such as Microsoft and IBM, or the names of some universities. We are familiar with trademarked logos, such as the Telstra ‘T’ and the Commonwealth Bank logo that one student rather cruelly describes as Vegemite on a Sao biscuit. (Vegemite and Sao are, of course, trademarks.)

Some people are aware that distinctive shapes in packaging are protected, such as the unique, cuddlesome Coke ‘contour‘ bottle. Sounds can be protected. Examples are Tarzan’s yodel (the rather strangled noise made by the loincloth-clad hero as he hurtles through the trees in films made by a particular studio), the drumroll-with-searchlights at the beginning of a 20th Century Fox film, or the roar of the MGM lion that differentiates that studio’s wares from those of Fox, Canal+ and Universal. Harley Davidson, contrary to rumour, does not have protection over the sound of its ‘hogs’.

Colours can be used to differentiate products. Think of the distinctive Tiffany blue used in packaging upmarket bling. In Australia, marketers have shown increasing interest in gaining trademark protection for the use of particular colours. That use has to be on a commercial basis (the law refers to “in the course of trade”) and is restricted to a particular class of goods and services. A colour trademark thus doesn’t give the user of the mark the right to ‘own’ the colour and, for example, stop you from painting your wall a particular shade of blue or force you to pay a licence fee if you wear a jumper that your granny knitted in the wrong colour.

Protection is more restricted. It relates to a specific shade of colour (typically identified on the Pantone scale) and to a specific group of products. The same shade – or one that is very similar – might thus be used by different companies to identify tractors and fast food, classes of products that few people would confuse. Each of those companies might get discrete trademark protection for its use of the colour to identify its products.

That’s confused the mass media and some marketers, who have fretted that particular corporations will own the colour blue or purple – all shades, all uses. In Australia, we’ve seen chocolate and pet food giant Mars get trademark protection for a shade of purple to identify cat food. Discerning kittens (or their doting owners) differentiate the Mars product from that of the competitors on the basis of the colour.

There was a public spat between Darrell Lea and Cadbury Schweppes over use of a similar purple for chocolates, with courts holding that consumers were unlikely to confuse cat food and chocolates but might confuse the products of the two chocolate companies. In the US last month, an appeals court reminded shoe manufacturers that they couldn’t get trademark protection for all shades of the colour red. A particular shoe company thus cannot own all uses of red for shoes, clothing, flags or traffic lights. Christian Louboutin, provider of footwear that law students die for, could however prevent Yves Saint Laurent from marketing shoes that have a red lacquered sole. The red sole functions as Louboutin’s sign, like the yellow stitching in Doc Martens kicker boots.

This month saw more Cadbury Purple litigation. Birss J in the UK High Court ruled that Cadbury could indeed get trademark protection for a particular shade of purple (Pantone 2685C) to identify its chocolate bars and similar chocolate products. The decision does not give Cadbury ownership of all uses of purple or of the specific shade of purple.

It does, however, allow Cadbury to prevent competitor Nestle from using that shade, or a confusingly similar shade, for the packaging of Nestle’s corresponding chocolate products. In essence, the Court recognised that people buying chocolate at the corner shop or supermarket typically don’t conduct a forensic examination: they are guided by the colour. Nestle wanted to piggyback on the goodwill and the brand recognition established by Cadbury over 100 years. The court said no.

« Media pitching tips: how to gain the attention of a journalistFacebook sponsored stories boost conversion rates… if done right »