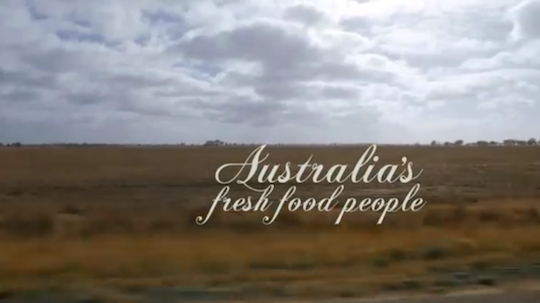 Patrick D’souza recalls working on Woolworths’ 2011 TV and online campaign, and stresses the importance that the company must continue to modernise and adapt to changing consumer food demands and trends.

The news on Woolworths decision to put their Masters brand into receivership would have come as no surprise to analysts; the company’s stock rose 5% on the spot! Yet this rise will be short-lived if Woolies doesn’t get focused again.

Part of the Woolies team at Droga 5 Sydney’s (I served as digital director on the account) strategy in 2011 leveraged the ‘fresh food people’, but built upon it as well. What Droga tried to get Woolies to do was ‘think fresh’ – not merely from a grocery product perspective, but every perspective – labeling, nutrition, service, supplier relations, community relations and so on.

Woolies bought the ad but not the idea. The brand ran what were probably the best ads of the year coming out of Australia. They also and did some good digital work, a site beautifully branded ‘Australiasfreshfoodpeople’. 60,000 Australians visited the site within six hours of the campaign launching. The site delivered the brand intent at a deeper level – it allowed people to ‘meet’ the farmers and get to know them better. It was dynamic and content changed as the seasons did in an automated way.

The ad was not the idea – tapping into rapidly changing consumer trends was.

Even three years ago, nutrition scientists and bio and food psychologists were starting to realise a somewhat alarming trend – that we are, actually, what we eat.

In other words, the cocktail of crap – high soluble sugars (white bread), preservative laden foods (salt and sugar are added to most shelf foods to enhance their lives) were starting to look fairly fundamental to what academics now considered an ‘eating epidemic’ in Australia.

Our eating habits – nothing to ‘Crowe’ about

Medibank, for example, in their summer magazine ‘Be’, have detailed the 2011-2013 eating habits of Australia, and the news is not heartening (pun intended!).

According to academic Tim Crowe, who interpreted the findings of the 2011-2013 Australian Government survey into the eating habits of Australia, 92% of Australians are not eating enough vegetables, the average Aussie gets  a paltry 2.2% of fibre in their daily diet and we are grossly overrepresented in our serves of confectionary, desserts, sugary foods and alcohol.

What Woolies missed – an opportunity!

The brand should have understood that it was critical to ‘think fresh’, not just in terms of produce but in terms of food curation,food education,  labelling, nutrition, community relations (it got absolutely hammered for the way it handled the Jamie Oliver range where it got suppliers to pay for his ads) and other such areas.

What Woolies didn’t do, Harris Farms and other brands went ahead and did. Harris Farms has grown in leaps and bounds and has recently expanded in the area of ecommerce as well. I haven’t met a single shopper who doesn’t love this brand! It curates its food, and you can buy ‘near blindly’ knowing its produce will be organic or non GMO – very healthy – locally sourced and produced.

It has clearer labeling systems, genuinely healthy options (no Coke or Pepsi at these stores) and has managed to steal Woolies most valuable asset – trust – in the high margin premium segment.

The brand missed the labelling opportunity, it mucked up supplier relations with PR debacle after debacle, and worse of all, fired the agency that developed, but perhaps did not communicate, as effectively as it could, what I believe was a brilliant strategy that needed it to ‘THINK FRESH’ in every one of its operations – not just grocery produce.

BY ON 22 January 2016
Patrick D’souza is a part-time student of Applied Psychology at the Australian College of Psychology (ACAP), Sydney, Australia. He holds an MBA (High-distinction) from the AGSM (Australian Graduate School of management), UNSW as well as Bachelor in Accounting. He works in marketing for one of Australia’s top private equity, debt and capital management firms. You can connect with him on Twitter @patrickbdsouza1

« Action, destination and pastels: the year ahead in designParticipate in the ‘2016 B2B Marketing Outlook Study’ to receive a complimentary copy »