You talkin’ to me? Gerry Harvey’s one-man, online retail debate

You talkin’ to me? Gerry Harvey’s one-man, online retail debate 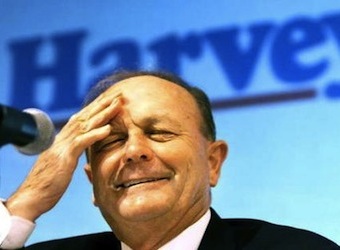 As far back as 2000, Gerry told ninemsn on a live chat forum “that most of the online business will be conducted by traditional retailers and that over 90% of the e-retailers will in fact all go out of business one after the other”.

In 2008, he famously told Smart Company that online retailing “is a complete waste of time”. During his short-lived campaign to have GST applied to all goods bought by Australians from overseas websites he said that online retail was “escalating to proportions that are quite unbelievable” and was threatening to put scores of retailers out of business.

By June 2011, he was sanguine: “We find people will order smaller things online, but for bigger items they’ll mostly come to the store, go home and order online”.

You might think this was Gerry changing his mind over time about the implications of online retail. But then I saw this interview on Lateline. If current affairs television consistently reached this level of rollicking entertainment, I would watch it a lot more often.

Gerry came across as a more avuncular and amusing version of Queensland’s late Joh Bjelke-Petersen. It became obvious watching this interview that there was no evolution to Gerry’s opinions on online retail – he held them all simultaneously.

There’s a popular line of thought that Gerry is a dinosaur, a man out of time who doesn’t get the internet. On the contrary, I think that there a lot of people who don’t get Gerry, or perhaps his business, and its complicated relationship with online retail.

When Gerry talks about the internet he is addressing at least two very different audiences. The first is the investment community who want to know that Harvey Norman has a digital strategy, understands ‘omnichannelling‘ and is forward focused.

The second are Gerry’s army of franchisees who want to hear that someday this war will be over. All of Harvey Norman’s Australian stores operate as franchises, aside from the recently acquired Clive Peeters and Rick Hart outlets. In the last financial year, franchisee sales revenue fell by 2% and the fees Harvey Norman Holdings received from their franchisees fell 5%.

Gerry has to walk a tightrope – being seen to embrace or at least understand online retailing while convincing his franchisees that the internet is not going to destroy their livelihood.

The franchisee structure makes it incredibly difficult for Harvey Norman to wholeheartedly embrace online retail. This underscores a very important point about the internet. It’s a disruptive technology. For a lot of businesses, it is not simply a matter of adding another channel. The landscape will change so much that a new business or business model is required. This is something that Fairfax Media and News Limited know only too well.

When Gerry talks about online retailing, most people think they are listening to a retailer. But Harvey Norman is also a major retail property owner and developer. It owns 74 sites across Australia and has a $2 billion property portfolio that includes properties in New Zealand, Malaysia, Singapore and Slovenia.

The strategy of banks and other businesses in the 90s and 2000s to divest themselves of property now looks very sensible. Australian banks have wholeheartedly embraced the internet and their customers have in turn embraced online banking. Banks may be affected by other people’s commercial property devaluing, but mostly they don’t have to worry about their own.

Online retail promises or threatens to greatly change how Australians buy and sell over the next few years. However it works out, I hope that Gerry Harvey is around a fair bit longer, saying things to provoke and amuse us.

Anybody who tells us omni-channelling, a glib and ugly expression if ever there was one, is ‘bullshit‘, deserves an audience.

Scott Ewing receives funding from the ARC funded Centre of Excellence in Creative Industries and Innovation.

« Debate: Content marketing – future or fad?Not the end for department stores – but time is running out to embrace technology »