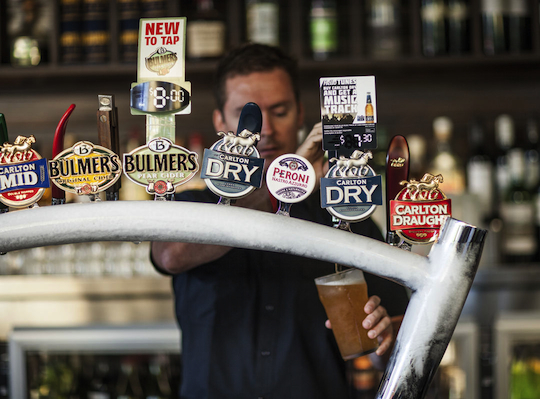 The ACCC is conducting an inquiry into the wholesale beer market amid accusations that brewing giants are “locking” craft brewers out of venues by use of exclusive and unfair contracts, according to consumer advocacy group Choice.

An ACCC spokesperson confirmed the inquiry is currently underway:

“The ACCC is continuing its market enquiries to better understand aspects of the supply conditions within the wholesale beer market(s).”

Choice has published details of an exclusive access contract for tap beer between a venue and SABMiller-owned Foster’s Group that includes the terms:

“It’s not uncommon for the big brewers to offer more money, rebates or other incentives for exclusive access to 80% or even 100% of pub taps, making it hard for independent brewers to get a fair go.”

Kirin and SABMiller are pulling 83% of Australia’s beer revenue and control 47% of the craft beer market due to acquisition of many successful, formerly boutique brands – including Little Creatures and James Squire (Kirin); and Matilda Bay brews including Fat Yak and Dirty Granny cider (SABMiller).

Jeremy Griffith, of Carlton and United Breweries (on behalf of Foster’s Group), says the company cannot comment on the ACCC inquiry but released the following statement:

“It is not unusual for publicans to enter into contracts for the provision of beer, spirits and wine, and it is a long standing practice. Overall, around 70% of our on-premise customers (pubs and clubs) do not have contracts, so overwhelmingly it’s an open market. In regards to beer, many of these contracts provide discounts on the keg price, as well as investment in the pub such as cool rooms, tap lines and fridges etc.”

Lion told Choice that it has cooperated fully with the ACCC inquiry but declined to comment further.

« Ikea Emoticons: ‘A smart solution to end misunderstandings around the house’Why less than half of consumers are positive about ethical purchasing – study »