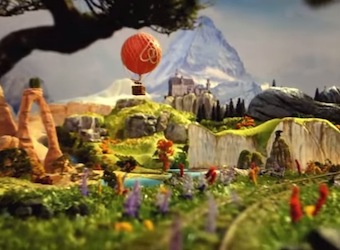 Airbnb has launched a global advertising campaign with an impressively detailed piece of creative, no doubt influenced by recently-appointed CMO Jonathan Mildenhall, formerly of Coca-Cola.

The hero of the ‘Welcome to Airbnb’ campaign is a 70-second video of a train moving through miniature environments, all shot in one take. (And it only took 85 takes to get it right.)

Using no computer generated imagery, 30 people spent five weeks building the 85 square metre train set in a warehouse in New Zealand, involving 20 square metres of plywood, 12 litres of glue and more than 160 sheets of poly board.

Jonathan Mildenhall, Airbnb’s CMO, said in a statement: “As you board the train in this film, you’re transported into a magical world that represents the very heart of Airbnb.

“As you wind your way through some of the amazing listings Airbnb has to offer, you get a different perspective on the world. With each viewing, you see something unique and interesting that you didn’t notice before, mirroring the experience that many people have when they travel with Airbnb.”

Some ‘fun facts’ about the video:

Here’s a video of the work behind the scenes:

« Australia has world’s third-highest digital media use, ahead of US and Canada: PQ MediaShoppers are most indecisive in supermarket fridge and freezer sections – study »