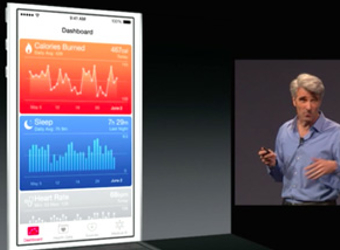 Apple held the keynote presentation of its Worldwide Developer Conference (WWDC) this morning (AEST), the annual conference at which Apple typically reveals the new versions of its software platforms, rather than new hardware.

Some of the most interesting updates in this year’s announcements are hidden away in the plumbing, the new frameworks made available for developers. These include ‘HealthKit,’ which provides the ability for health and fitness apps to communicate with each other, and ‘HomeKit,’ which delivers a common protocol, secure pairing and the ability to control individual or groups of devices throughout the house, such as lights, and includes integration with Siri.

If you’re after some hearty discussion of the new operating systems and developer tools Apple announced, we recommend our sister publication MacWorld Australia and site MacTalk.

But, if you just want to scan over the announced changes to Apple’s operating systems and apps then look no further than this very page. (We’ve tried to remove all the superlatives.) This post is a summary of:

1. Apple unveils iOS 8 – “the biggest release since the launch of the App Store”

Apple is calling iOS 8 “the biggest release since the launch of the App Store”. iOS 8 delivers a “simpler, faster and more intuitive” user experience, including iCloud Photo Library, new Messages features to easily share voice, video or photos with just a swipe, and an entirely new health app that gives you a clear overview of your health and fitness data all in one place. iOS 8 also includes predictive typing for Apple’s QuickType keyboard, Family Sharing, a system for sharing purchases, photos and calendars within the same household, and iCloud Drive, for storing files and accessing them from anywhere.

The new Today view in Notification Centre gives a quick look at everything you need to know all in one place, iCloud Drive is located within the Finder and can store files of any type, and Safari has a new streamlined design. Mail makes editing and sending attachments easier than ever, Handoff lets you start an activity on one device and pass it to the other, and Instant Hotspot makes using your iPhone’s hotspot as easy as connecting to a Wi-Fi network. Yosemite also gives you the ability to make iPhone calls on your Mac.


Apple today released its iOS 8 SDK, the biggest developer release ever with more than 4000 new APIs. iOS 8 allows developers to further customise the user experience with major extensibility features like Notification Centre widgets and third-party keyboards; and introduces robust frameworks such as HealthKit and HomeKit. iOS 8 also includes Metal, a new graphics technology that maximises the performance of the A7 chip and Swift, a powerful new programming language.