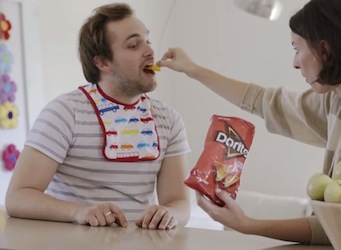 The finalists for Doritos’ 2015 ‘Crash the Super Bowl’ contest have been announced, and again there’s an Australian entrant in the final 10.

Australian filmmaker Armand de Saint-Salvy is one of 10 finalists in the annual ‘Doritos Crash the Super Bowl’ promotion, a competition that invites fans of the corn chip brand to create TV advertisements with the two winning spots being aired during the Super Bowl on Sunday 1 February (local time).

De Saint-Salvy’s entry ‘Manchild’ was chosen as a finalist, the second year running an Australian entrant has made the final list (remember ‘Finger Cleaner’?)

Ultimately, two ads will air in front of a global television audience during Super Bowl XLIX. The Grand Prize winner chosen by votes and a first prize winner selected by the Doritos brand team. The creator of the ad that receives the most fan votes will win US$US1 million in prize money as well as the opportunity to work for a year at Universal Pictures in Hollywood. The first prize winner, as selected by the Doritos brand, will receive US$50,000.

The 10 finalist videos and voting system are housed on the ‘Crash the Super Bowl’ campaign site.