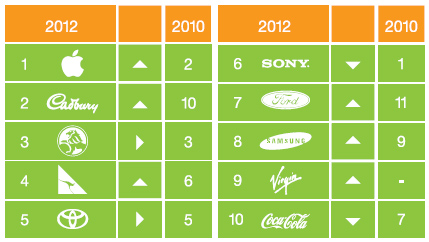 Love may not have been a word used to describe feelings towards Qantas at the end of last year, but the union squabble and consequent grounding of the airline appear to have done nothing to quell Australia’s love affair with the brand.

A study conducted by Square Holes research places Qantas as the fourth ‘most loved’ brand in Australia, up two places since 2010. However, while it remains one of the most loved brands, rival airline Virgin is closing the gap, having broken into the top 10 for the first time to place ninth on the list.

The study, which used focus groups, an online survey of 1,000 Australians and ethnography approaches to arrive at its conclusions, names Apple as the nation’s most loved brand. Cadbury rose up the rankings steeply to come in at second place, while Holden held steady in third spot.

The online survey, which determines the brand ranking by asking participants to nominate their favourite brands without prompting, may be susceptible to sudden changes if certain brands have engaged in particularly memorable or large ad campaigns, making them top of mind during the survey process.

Also in the top 10 of Square Holes’ ‘Make Love Not War’ ranking was Toyota at number five, Sony, which dropped from first place to sixth, Ford at number seven, Samsung at number eight and Coca-Cola at number 10.

Telstra and Optus which appeared in the top ten previously are no longer on the list.

“It’s interesting to note that each of the top ten brands were perceived to have better products than their competitors but their communication, service and advertising are viewed as being the same standard.”

Australians are driven by connection with the people in their lives and new experiences, the research found, leaving less room for aspirational brands. “The top brands are seen by Australians to be supporting them along this path and are brands whose products they use regularly and form part of their daily lives,” Dunstone adds. “No aspirational brands like Aston Martin or Rolex made the list – perhaps a sign of the times.”

The research also found that Australians are most likely to engage with loved brands through their website, closely followed by Facebook. Most people would not engage through Twitter or an app.

However, when it comes to purchasing they move offline and still prefer the personal experience of buying products from the top brands in store, with four in five (78%) expressing this preference  despite growing levels of online shopping.