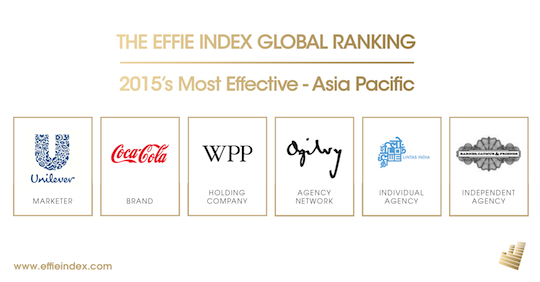 The three brands, none of which operate in Australia, join global giants Coca-Cola and McDonald’s in the top five.

Effie Worldwide has drawn these Asia Pacific lists from the Global Effie Index, which is compiled from 3,136 finalists and winning entries from worldwide Effie Award competitions between 1 January, 2004 and 31 December, 2014.

The top five most effective independent agencies in Asia Pacific:

Effie Worldwide created these lists by converting Effie awards and finalist placings into points – 12 for a Grand Effie, eight for gold, six for silver, four for bronze and two for a finalist (with contributing agencies receiving half these points).

“Every brand and company ranked in the Effie Index has undergone rigorous evaluations of their case studies and work by expert industry judges to prove that their marketing achieved compelling results,” the organisation says.