The Australian Centre for Corporate Social Responsibility (ACCSR) has released its 2015 review, examining the stages of CSR in businesses across Australia and New Zealand.

While compliance remains the main priority for organisations where CSR maturity is low, the top priority in the year ahead for businesses in higher stages is building stronger relationships with stakeholders.

Another key finding of the report is that that CSR is becoming a much more important part of product innovation and new market development.

According to the the study, CSR innovation in products and processes has grown in importance since 2012, rising from 63% to 69%.

The importance of CSR innovation in market development has risen dramatically since 2012 from 51% to 66%.

The study found that shared value, where links are found between competitive advantage and solutions for social problems, is a driving force behind CSR development in Australia.

ACCSR has adapted a three-stage framework from a Harvard Business School study and renamed the stages:

The graph below shows the stages of development by industry in Australia. 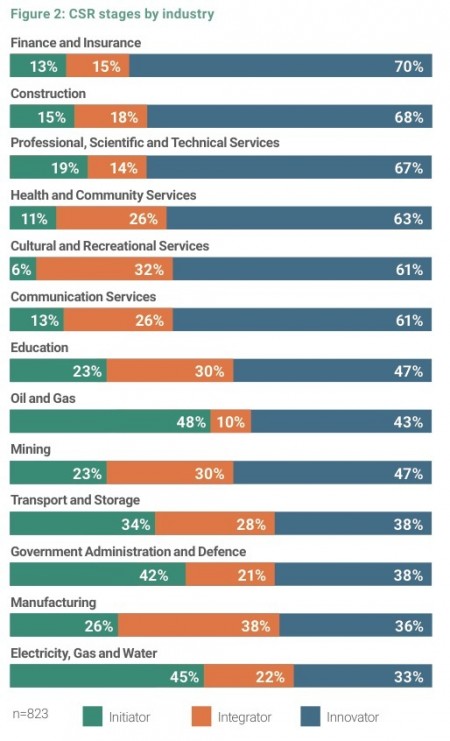 Published annually, the study this year examines the emerging role of CSO as the company’s move through the stages of engagement with CSR.

The research shows that organisations with CSOs scored on average nine percents higher in CSR management capabilities than those without, and scored 34% more for CSR Innovation.

The ACCSR study ranks the top organisations of Australia based on their scores of CSR management capabilities. To make the top 10 the organisations have to score 75% overall and have more than five respondents. This years top 10 is:

This year the top 10 is almost entirely new, only Arup and PwC have managed to stay in the top 10 from last years list.

New Zealand scored 70% overall in CSR management, 2% behind the average score of Australian companies (72%) and similarly to Australia they achieved highest scores in stakeholder engagement but lower scores in social accountability.

This figure shows the differences and similarities between the priorities of organisations in Australia and New Zealand for the year ahead. 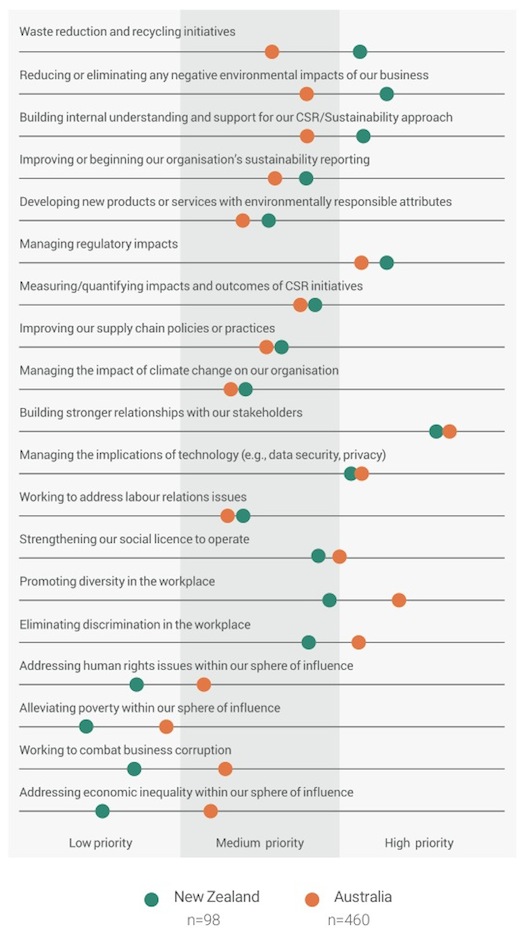 « ME Bank unveils more modern brand identity and drops ‘bank’ from nameBrandZ 2015 rankings: Apple sees huge jump in brand value, but not because of Apple Watch »