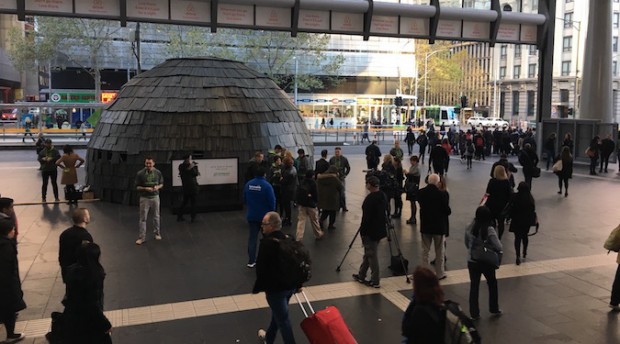 Headspace has launched a national awareness campaign aiming to shift perceptions around the stigma of seeking help for youth mental health issues.

Commuters had the chance to take away a piece of the Big Stigma’s outer shell, each piece containing information about mental health issues and how to seek help for them.

Comedian Dave Hughes –who suffered mental health issues at age 21 – was on board to show support for the campaign.

As of last week, the campaign launched fully with a digital hub complete with a virtual stigma to be torn down.

The hub provides links to various resources and tools for friends and family seeking to support those suffering youth mental health issues.

The campaign is supported by TV, radio, social, digital, flyers and outdoor media.

“This campaign seeks to change attitudes and encourage Australians to reduce the fear and social distance around seeking help for mental health issues, buy bringing the issue to the forefront of the public conscience,” says Headspace head of strategic communications Simone Williams.

A quarter of Australians aged 12-25 will experience a mental health issue, however over 50% are too embarrassed or afraid to talk about mental health.

“Those who are in the most need of early intervention often don’t feel empowered enough to seek help. Our job was to bring visibility to the prevalence of mental health issues among young Aussies and to show that Headspace is doing something about it in a big way,” says CHE Proximity creative director Anthony Moss.