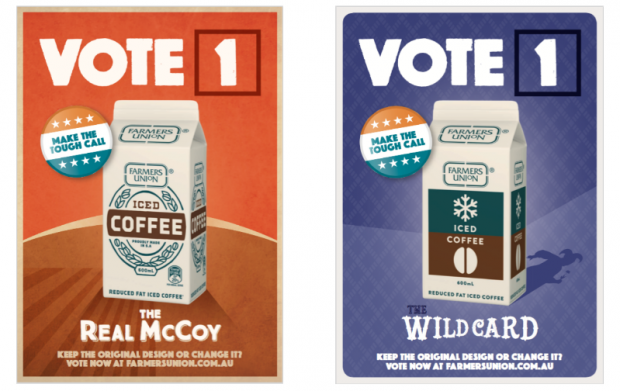 Farmers Union Iced Coffee have invited South Australians to vote in an election to help choose their new carton design.

South Australians are invited to cast their vote for their favourite Farmers Union Iced Coffee carton design in a new campaign.

The public are able to choose between ‘The Straight-Shooter’, ‘The Real McCoy’, ‘The Wild Card’ and ‘The Original’.

Each container is a slight variation on the normal packaging. ‘The Original’ has no changes made. The colour scheme and beverage itself remain the same.

Each carton candidate has its own South Australian celebrity ambassador. 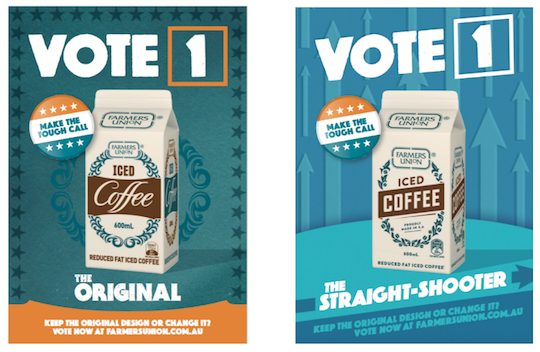 The campaign is managed by AJF Partnership and the pack designs are developed by SouthSouthWest.

The campaign joins a growing list of brands that have employed election themes, including KitKat’s launch of ‘The Breakers Party’ and Hungry Jack’s ‘Whopper for PM’ campaign.

Approaching 40 years of age, Farmers Union Iced Coffee was launched as an idea by a co-operative of passionate South Australian Dairy Farmers to boost milk sales, has since achieved icon status, and continues to be the number one selling milk based beverage in the state.

Lovers of the beverage can cast their vote online and follow the campaign on social channels via #FUICToughCall.

The brand is calling this ‘the most important election in 40 years’, although press for the campaign makes it clear that ‘nobody actually said this.’