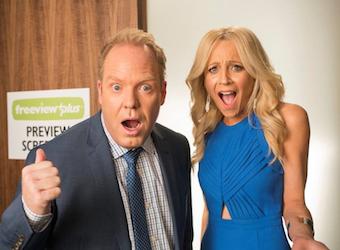 FreeviewPlus has been given a launch date and a teaser campaign, with the next-gen digital product from the free-to-air TV industry body officially launching on 2 September.

FreeviewPlus will be launched on Tuesday 2 September. A hybrid broadcast broadband TV (HbbTV) system based on the model in Germany, FreeviewPlus combines broadband and broadcast TV into the one EPG. That means viewers can access all digital free-to-air television broadcasts as Freeview does currently, with the addition of the catch-up services from the networks, as well as apps created by the networks themselves or on behalf of partners, all through the one interface.

Initially slated for a May 2014 release, the date got pushed back to late August, with rumours circulating that the hold-up was due to conflicts between the rival TV networks.

READ: Citizen-centric media and the future of news »

A major attraction of the new service will be the availability of all the free-to-air catch-up digital services through a TV set in one place, taking Ten Play, Nine’s Jump In, Plus Seven, SBS On Demand and ABC iView from web browsers to televisions. The new EPG will allow viewers to watch shows broadcast up to seven days previously if they have a FreeviewPlus-certified box connected to broadband.

SBS launched its product in early, in June, allowing anyone that already has a HbbTV-enabled set to try out the beta version.

The teaser campaign that lands today features some of Australia’s TV personalities, to herald next month’s launch of FreeviewPlus, the new service that provides access to content and services from Freeview.

The campaign, carrying the tagline ‘FreeviewPlus, a whole new way to enjoy TV’, debuts across all Freeview networks tonight. It shows enthusiastic reactions from TV celebrities after they have attended a preview screening of FreeviewPlus and reminds viewers that FreeviewPlus is ‘coming soon’.

Marketing was given a demo of the platform earlier this year, and while we didn’t get the chance to yell ‘That’s rock’n’roll!’ at a camera, it was indeed pretty cool, and will be of great interest to anyone who consumes a mixture of live free-to-air television and catch-up services.

READ: The rise of the 5-second ad format »

Liz Ross, general manager of Freeview, says FreeviewPlus is one of the most important advances in free-to-air television in Australia since the introduction of digital TV. “So it’s important we start to generate a buzz about the new service among Australian viewers.

“As in all of our previous TV campaigns, this teaser spot features well-known and loved Australian TV celebrities – they’re excited about the forthcoming launch, and there is plenty to be excited about,” Ross says.

The teaser campaign launching tonight is part of an extensive marketing campaign that will support retailers and manufacturers and drive consumer awareness of FreeviewPlus.

Manufacturers will release a range of FreeviewPlus receivers to coincide with the launch of FreeviewPlus and these will be available from all major appliance and electronics retailers.

FreeviewPlus will continue to be made available through an increasing number of new connected receivers carrying the FreeviewPlus logo including panel TVs, set top boxes and recording devices.

« LinkedIn has announced its new lead nurturing tool for salespeopleWestfield: Showrooming not a threat, 2 in 5 shoppers ‘reverse showroom’ »