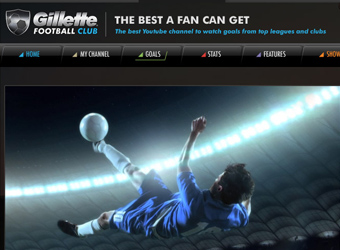 Gillette has partnered with YouTube to launch a football channel to make highlight content from various football leagues available globally.

‘Gillette Football Club’ aims to reinvent the way people watch football online by aggregating highlights, news, statistics and behind the scenes footage from the top football leagues and clubs, as well as new and exclusive content.

It will cover top leagues like Spain’s La Liga and Italy’s Serie A, over 50 different clubs, including Manchester City FC, Chelsea FC, Paris Saint-Germain and Olympique de Marseille, and news from sports content providers such as TalkSport and ESPN.

Currently launched in beta mode with plans to roll out to Australia soon, the YouTube channel is free to sign up to and allows viewers to select their favourite leagues and clubs to have the latest videos delivered to them upon upload.

It was developed under the creative lead of Proximity BBDO Paris. CEO of the agency, Olivier Rippe says the channel was a challenge both from a creative and technical standpoint. “We have gathered experts, sports journalists and exceptional partners, to create a program that lives up to P&G’s [Procter & Gamble’s] very high expectations and business priorities of the group.”

Matt Brittin, VP sales and operations at Google, Northern and Central Europe, adds that the ever expanding team of YouTube football partners create a diverse and compelling content line up for fans. “We’re delighted to join forces with Gillette to build a fantastic new YouTube experience for our passionate football community.”

The move will see Gillette become the main sponsor of football content on YouTube in Europe, Middle East and Africa, and add to the partnership the FMCG firm has with charity streetfootballworld by donating one dollar for every registration to the club up to a limit of US$300,000.

The integration of I AM PLAYR into the platform will give the channel access to a large, existing, football-engaged audience. Over 5 million players aged between 16-34 years spend more than 50 minutes per day engaging with the brands and content in I AM PLAYR, according to the games creator, We R Interactive. Paul Whitehead, global commercial director of We R Interactive says, “There’s a natural synergy between I AM PLAYR and Gillette and we’re excited to be partnering with them on this global deal which will enhance the gameplay experience for both our users and football fans on the Gillette Football Club.”