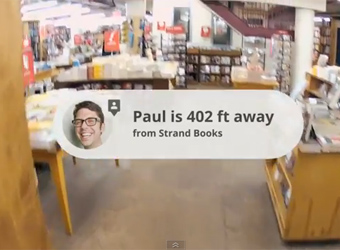 ‘Googling it’ is quickly becoming socially accepted behaviour, and an opportunity the search giant wants to seize by making search available on surfaces like kitchen walls and dining tables.

The company is working on extending the role of search beyond PCs and mobile devices to integrate search into life more pervasively, with projects around augmented-reality glasses, voice or touch-generated search, watches and everyday surfaces.

Googling the answer to a question is “still somewhat awkward when you see that at a dinner party,” the company’s senior vice president of search, Amit Singhal, told the New York Times. “The key to the future is how can you make such conversations socially even more normal?”

Research shows mobile search levels peak during mealtimes, rather than occasions when a user is likely to be seated in front of a PC. These queries usually centre around general information searches such as ‘How tall is the Status of Liberty’ or ‘How old is the earth?’, indicating a social or curiosity element to mobile interactions.

According to the Times, Huffman says, “If we take it to the next step, which we’re excited about, Google and the information I need is right here in the room with me.

“As we’re talking, we just say, ‘Hey, Google, blah blah blah,’ and it comes up on a screen or tells you the answer.”

‘Google Glass’ is the company’s exploration into eyewear frames with a screen to augment normal vision with additional information. The vision for the project is to take many of the activities currently conducted on a smartphone and make them available on the glasses device in a hands-free, voice-controllable interface.

Both Google, through its voice activated app for iPhone, and Apple, using its Siri ‘personal assistant’, have established voice-controlled search functions.